I read the android developer guide and some articles in internet, I’m still confusing about the singleTask launchmode. Lets take an example:

Then user click the home buttom and choose to launch App2, so task1 goes in background and android start a new task: task2, user does something:

What I understand is that task1 comes to frontend again and task2 goes to background. And task1 looks now like this:

Yes, you are Right…

Have created 2 Tasks (Projects) and uploaded the same @ SendSpace. Try it out…

If you look at androids documentation it says

This means that when you click the home button all the activities above the single-task activity (which in your case is ActivityB) are removed from the stack.

In a scenario where the Activity’s above the Single Instance activities (ActivityB) are not removed from the Back Stack, and another application request this Activity (ActivityB) it may not be shown and the intent may be dropped. But this has extremely fewer chances of happening because the user will have to press the Home button and but the current Task\App in the BackStack before he could navigate to another Task\App.

The other modes — singleTask and singleInstance — are not appropriate for most applications, since they result in an interaction model that is likely to be unfamiliar to users and is very different from most other applications.

I hope this solves your doubts.

Why don’t you test it.

There is also this app that can help explain launch mode: 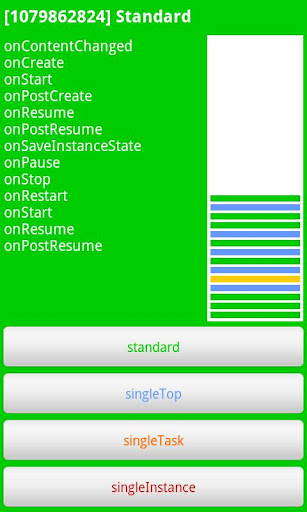 Previous article
Php put a space in front of capitals in a string (Regex)
Next article
android – GCM: MulticastResult – which result is from which device?