Adding a second dictionary to the spell-check in Android 4.3?

I write in two languages simultaneously (English and Spanish) and it is customary to switch between them in the middle of sentences. The spell checker/predictive text goes haywire when I type in Spanish. I can’t seem to figure out how to add that dictionary to the mix, and having to enter each word one at a time as I type them is a pain. Is there a way I can have it do English and Spanish at the same time? I don’t need the keyboard to change, just the spell checker, really.

On Android you can input multiple languages and switch them by sliding on the spacebar. Go to the settings under “language and keyboard” and then “Android Keyboard”, “Input language”.

This seems to have changed with Android 5. If you use a 3rd party keyboard, such as Hackers in my case, changing the language “within” the keyboard changes the suggestions, but does not change the dictionary for the system spellchecker, so your text will have red underlines. To get rid of these, my only solution at this point is to abandon Hackers Keyboard and go with Google Keyboard. The long press on the spacebar brings up all keyboard/language combinations, and the system spellchecker language changes accordingly.

Settings -> Language & input -> Android keyboard (tap the settings icon just to the right) -> Input languages. Select as many as you want.

Now, open any app which uses a keyboard, such as Messaging. Pop the keyboard and you will see that the spacebar now indicates the current language setting, for example, “English (US)”. Look just to the left of the spacebar for a button with a world map icon. Tap it once to instantly switch to an alternate language (mine is Italiano). If you have just the two languages setup, tapping the world icon will swap between them; if you have more than two, it will cycle through them. You can also tap/hold the world map icon for a different method of choosing.

Normally, each time you switch language, the spellcheck dictionary changes as well. However, I don’t see a Filipino language dictionary available for download, so not sure how this might work. Settings -> Language & Input -> Add-on Dictionaries

SwiftKey allows you to add up to three languages simultaneously. I regularly type in three different languages, Swedish, English and French. If I start a sentence in say, French, I can suddenly in the middle of a sentence switch to English if I can’t find the word I’m looking for without any problems. Predictions will then be automatically switched from French to English as well.
I only have one issue with the app. Sometimes I write in Finnish as well, and changing to the fourth language is somewhat of a hassle (settings, languages, uncheck on of the currently used languages and choose the new one). But overall I’m happy with it.

This may also depend on the selected keyboard. My Android 5.0.1 keyboard didn’t gave me suggestions in my language even though that language was enabled.

I fixed this by selecting Gboard (Google keyboard) and enabling my language there. 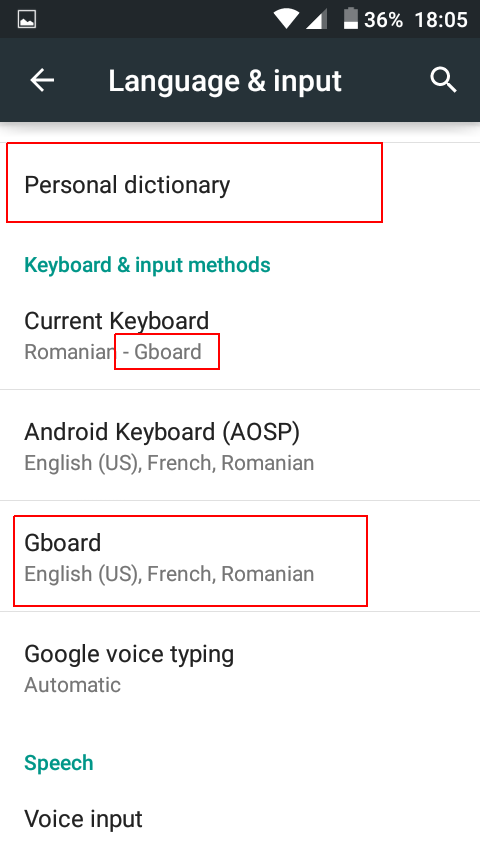 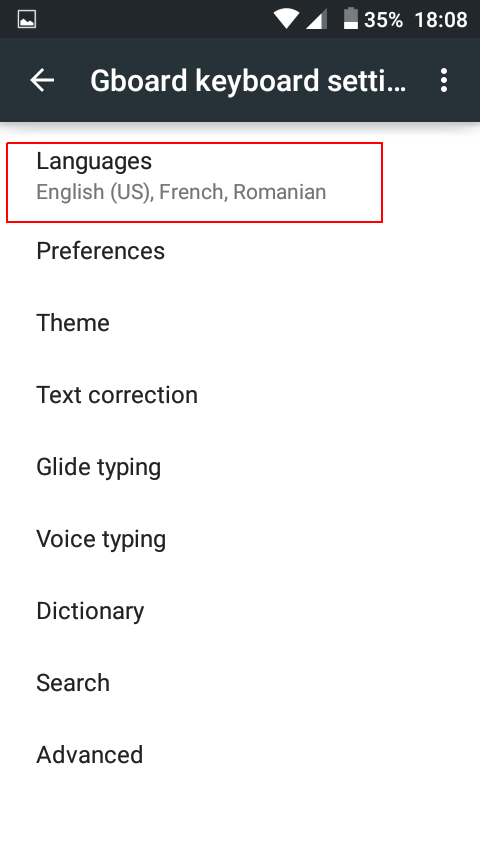 Selecting multiple languages for the Gboard keyboard makes suggestions available for all these languages at the same time. 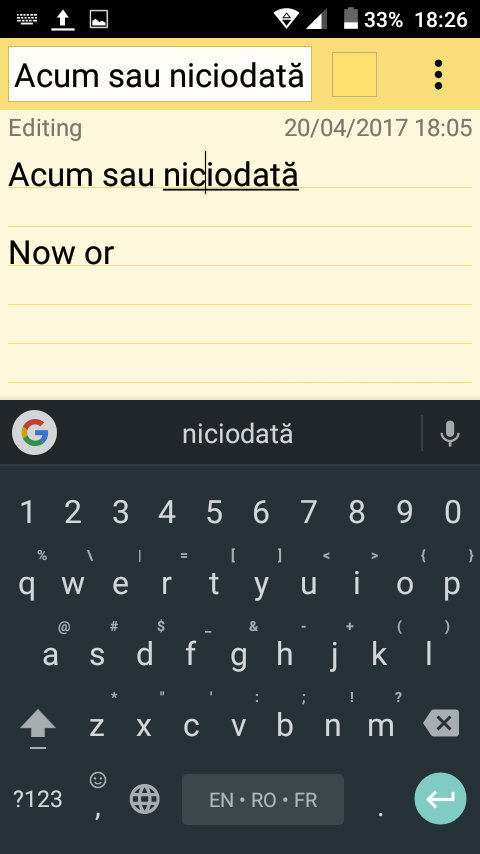 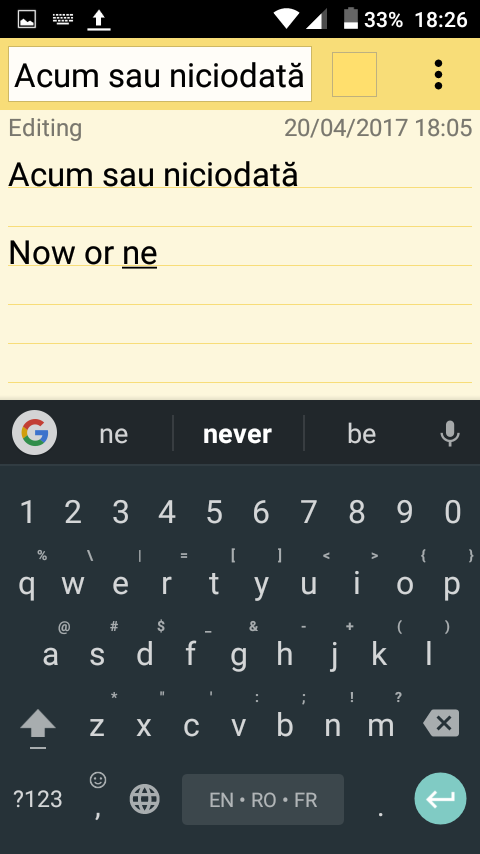 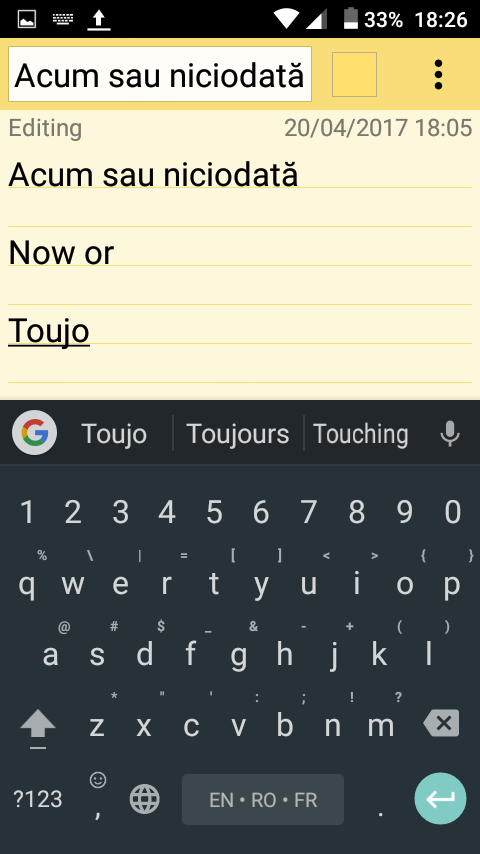 Then in Languages, you can tick all the keyboards you want. In my case, French (France) and English (UK).

This will give you the usual AZERTY French keyboard and the usual QWERTY English keyboard.

If you want the English dictionary with a French AZERTY keyboard, you can go to Preferences > Personalised input styles and create a new keyboard Language: English (UK) Layout: AZERTY, then in the Languages menu, you will have a new keyboard in the list, English (UK) (AZERTY). Tick it.

While using the keyboard, you can then switch from one keyboard to another either with the special button or by holding the Space bar. The Space bar also shows the current language being used.

I just found an easy way to accomplish your goal. Turn off the auto correction function. Go to settings, go to language and input, go to Google keyboard settings, go to text correction. Uncheck autocorrection. You can then type whatever you want and it will still give suggestions but it won’t jump them into your message. Espero que ayudo! I was having same issue typing in French to my friend in Madagascar, this fixed it for me. Android 4.4.2.