Here is my scenario:

Is this possible to achieve using MediaMuxer ? Any info on the matter is gladly received

I’ve been looking to http://bigflake.com/mediacodec/#DecodeEditEncodeTest (Thanks @fadden) and it says there:

“Decoding the frame and copying it into a ByteBuffer with
glReadPixels() takes about 8ms on the Nexus 5, easily fast enough to
keep pace with 30fps input, but the additional steps required to save
it to disk as a PNG are expensive (about half a second)”

So having almost 1 sec/frame is not acceptable. From what I am thinking one way would be to save each frame as PNG, open it, add the bitmap overlay on it and then save it. However this would take an enormous time to accomplish.

I wonder if there is a way to do things like this:

Should I switch to ffmpeg ? How stable and compatible is ffmpeg ? Am I risking compatibility issues with android 4.0+ devices ? Is there a way to use ffmpeg to acomplish this ? I am new to this domain and still doing research.

Years later edit:
Years have passed since the question and ffmpeg isn’t really easy to add to a commercial software in terms of license. How did this evolved? Newer versions of android are more capable on this with the default sdk?

I got some negative votes for posting info as an answer so I’ll edit the original question. Here is a great library which, from my testing does apply watermark to video and does it with progress callback making it a lot easier to show progress to the user and also uses the default android sdks. https://github.com/MasayukiSuda/Mp4Composer-android

Testing on emulator, seems to work fine on android 8+ while on older generates a black video file.However, when testing on real device seems to work.

I don’t know much about the MediaMuxer but ffmpeg does support overlaying functionality. FFMPEG has various filters one of them is overlay filter. What I understand is you want to overlay an image (i.e. png) on the video, ffmpeg surely is a useful framework to do this job. You can set the output format you can set the co-ordinates of the image which is to be overplayed.

More information about the filters is available at following website,

If this is a solution to your problem you need the C code equivalent to the above command. You also need to see the performance of the ffmpeg because it a pure software framework.

Hope I have understood your question correctly and this helps.

If you need do this without ffmpeg on Android device:

Advantages of this way:

It has transcoding\remuxing functionality as MediaComposer class and several sample effects like JpegSubstituteEffect – it shows how substitute video frame by a picture from jpg file and TextOverlayEffect to overlay text on video frame etc. It could be easily enhanced to watermark effect 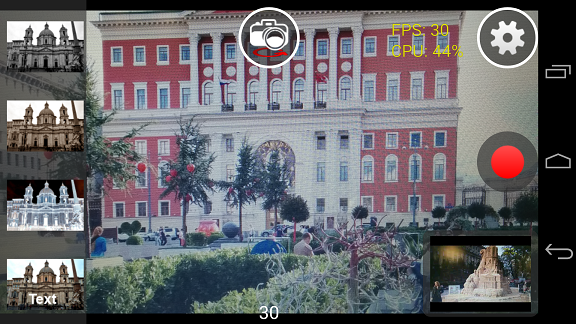 This is what worked for me:

ffmpeg recommended the usage -strict -2 inorder to allow the usage of experimental codecs. without the inclusion, the accepted answer above fails to work.