I am having issues installing an apk to my device.

Using the above command returns the following:

It definitely recognizes the device. Could it be an issue with the apk?

If you want to keep the attribute android:testOnly as true you can use pm install command with -t option, but you may need to push the apk to device first.

I was able to reproduce the same issue and the above solved it.

If your APK is outside the device (on your desktop), then below command would do it:

I had a similar problem with Android Studio 3.0.0 Beta 7 and could not publish anymore to the play store.

Note: The Run button builds an APK with testOnly=”true”, which means
the APK can only be installed via adb (which Android Studio uses). If
you want a debuggable APK that people can install without adb, select
your debug variant and click Build > Build APK(s).

Same goes for release build, with Android Studio 3 you need to go to Build > Build APK(s) to have a non testable release apk that you can submit to the store.

Add -t install flag, as on the screenshot below: 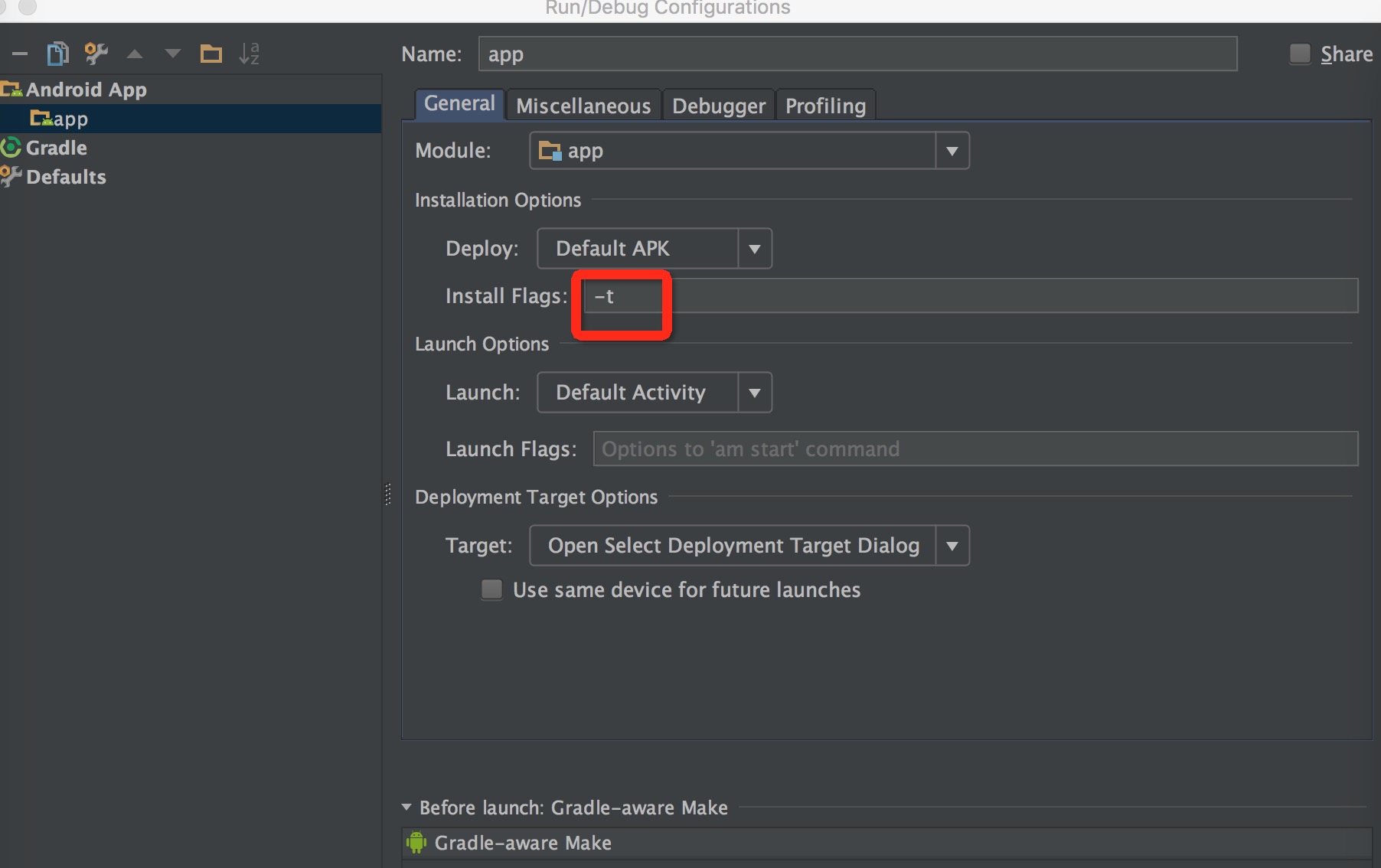 In my case this mistake was in unstable gradle version. Just use a stable version of gradle (not alpha, not even beta). And it was fixed for me

After searching and browsing all day, the only one works is adding

to the gradle.properties file

I agree with Elisey. I got this same error after opening my project in the 2.4 preview and then opening the same project in android studio 2.3

Fixed the issue by changing this line in build.gradle from

I have solved the issue by adding the “android:testOnly” property to android manifest’s tag.

And then generated the APK by Android studio3.0 menu:Build–>Build APK(s).

add this line to your ‘gradle.properties’

In my case was by uploading an APK, that although it was signed with production certificate and was a release variant, was generated by the run play button from Android studio.
Problem solved after generating APK from Gradle or from Build APK menu option.

If you want to test the apk, just add the -t command line option.

None of the previous post solve my issue. Here is what’s happening with me:
I normally load the app from android studio by clicking on the “Run” button. When you do this, android would create an app that’s good for debug but not for install. If you try to install using:

you will get a message that says:

When this happens, you will need to rebuilt the apk by first clean the build, then select Build->Build APK. See the image bellow: 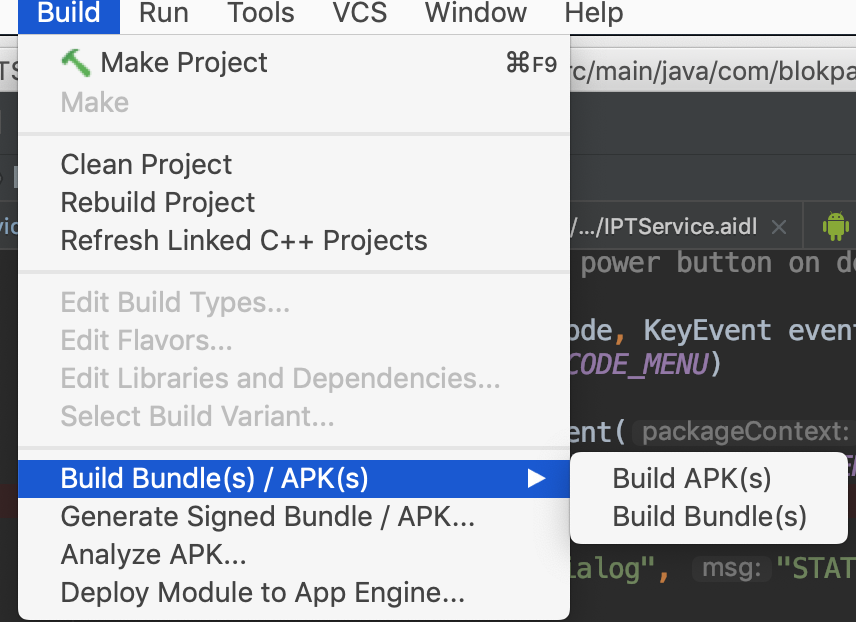 adb install -t “path to apk in ur computer”

attaching a screenshot for reference

The easiest to solve this, without reverting to an older gradle version is to add the ‘-t’ option in the run configurations (for pm install).

testOnly=’false’ had no effect whatsoever. The error is caused by the alpha version of gradle plugin that makes debug APK ‘for test only purposes’. The -t option allows such APK to be installed. Setting it in run configuration makes it automatically install you APK as usual.

this works for me adb install -t myapk.apk

I don’t know if it’s gonna be useful for anyone or not, but I got this error message, when I accidentally tried to build and install my project with test gradle plugin ('gradle:2.4.0-alpha5') version in stable Android Studio version (2.3, not in 2.4 preview 5 version I’d downloaded and installed before).

When I realized my mistake, I launched preview Android Studio version and it built and installed my project without any problem.

Although I am sure Saurabh’s answer will work for most other people, I did want to identify the extra steps I had to take in order to get my apk installed.

I tried pushing to the device with the following result:

After looking around to change the filesystem RW permissions I ended up executing the following commands:

I got this when I tried to push again:

I was able to push to the sdcard:

At which point I was able to execute Saurabh’s command:

My finding is as below. If I compile using the Android Studio UI, and the APK generated, I can’t just

It will generate Failure [INSTALL_FAILED_TEST_ONLY]

I need to compile it using the gradle i.e. ./gradlew app:assembleRelease. Then only the generated apk, then it can only be installed.

This is because the Android Studio UI Compile, only generate test apk for a particular device, while ./gradlew app:assembleRelease command is the actual apk generation to be installed on all device (and upload to playstore)

For me it has worked execute the gradle task ‘clean’ (under :app, at Gradle pane, usually located at the right) and run again the project.

Build your distribution .apk from Android Studio as follow

These option builds the APK with android:testOnly=”false” option which allows you to install the APK expicitly into device by the commond.

What worked for me is performing Refresh all Gradle projects from the Gradle toolbar from the right menu.

PFB the screenshot from Android Studio.

This resolved the issue for me. 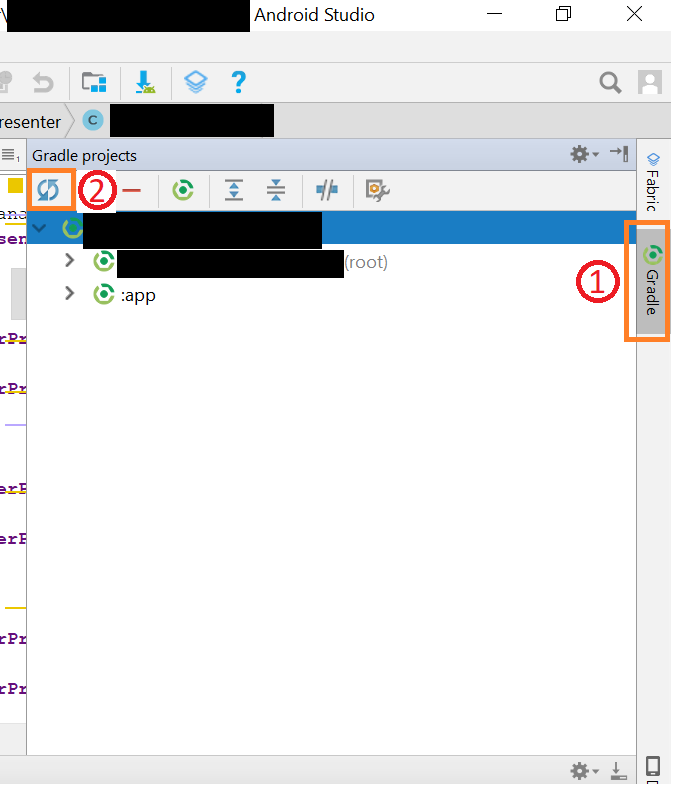 As mentioned in documentation:

Android Studio automatically adds this attribute when you click Run

So, to be able to install your apk with adb install <path to apk file> you need to assemble build from terminal: ./gradlew assembleDebug and install with adb. Or just run ./gradlew installDebug to build and install on the device simultaneously.

; and then reinstall the apk.