I’m running on Windows 7, and I’ve updated all the drivers as it says on the Android developer website regarding using hardware devices. However, Eclipse is still not recognising my Nexus 4 when I try to run the application. The Android device chooser pops up, but it doesn’t show anything on the hardware section. I’ve turned debugging, third-party apps, and mock locations all on on my phone as well.

Is this because the phone is still new? Is there a way of making my Nexus work with Eclipse?

Nothing is showing up under ADB devices in the command prompt.

I had a similar sounding situation with my Nexus 4. For me it was an issue with the drivers Windows was installing automatically. I followed the instructions in [Q]Computer won’t recognize phone? – Post #8. I had some slight differences on Windows 7.

Just to confirm a previous comment. I needed to switch my connection to Camera (PTP) mode in addition to enabling Developer options and then selecting USB Debugging from the newly appeared Developer Options.

If it still doesn’t work try changing from MTP to PTP. 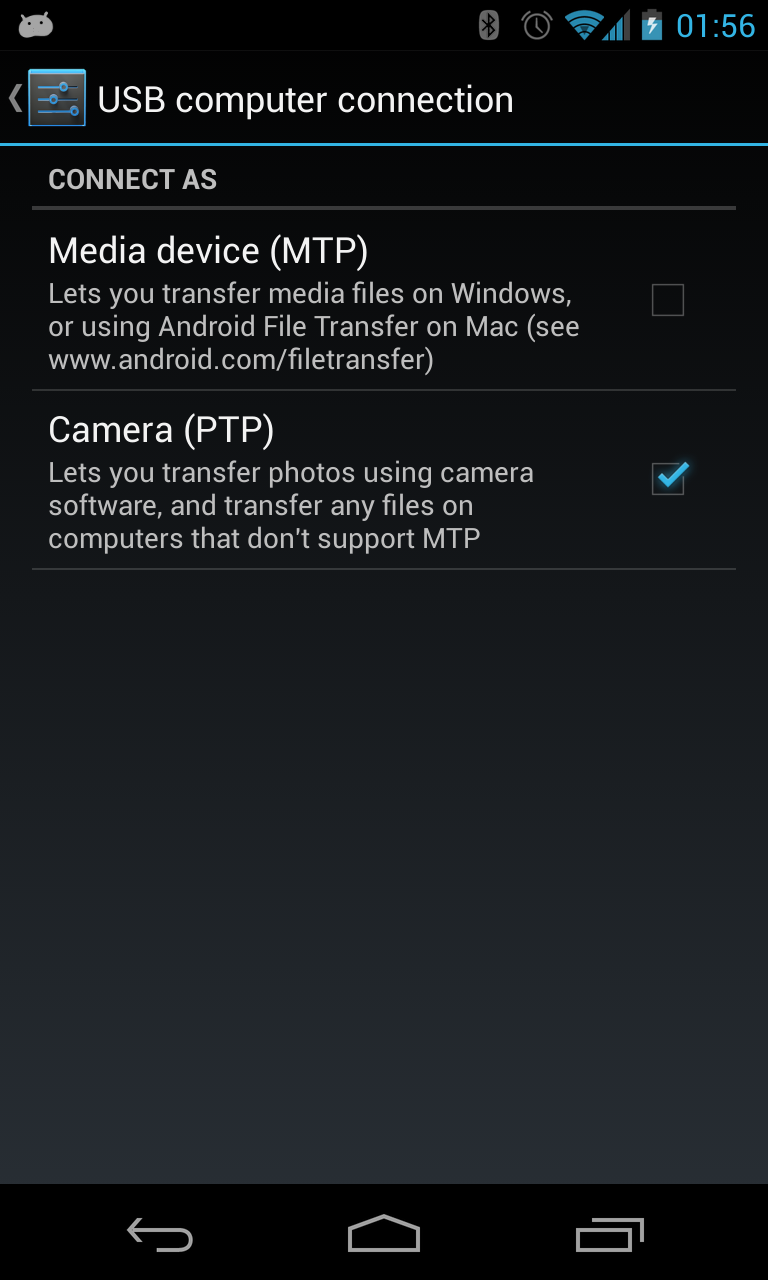 I had the same problem, but I didn’t want to change to PTP mode. This is how I fixed it with MTP still enabled.

I had the same problem and none of the above worked, but the following solution worked for me:

For what it’s worth, in my case I was able to fix the problem simply by changing my USB connection mode from Media device (MTP) to Camera (PTP).

I had to resort to a clean install of Windows 7 x64 to fix this issue.

I tried all steps/variants in the other answers. No luck. Device Manager would show my ‘Android Device / Android Composite ADB Interface’ working properly with the 7.0.0.1 driver from Google, but nothing could get ‘adb devices’ to show my Nexus 4.

I used USBDeview to uninstall every USB device that had connected to my computer except my keyboard and mouse. No luck.

I enabled ‘Show hidden devices’ in Device Manager and uninstalled anything related to USB. No luck.

I added Google’s vendor ID to adb_usb.ini. No luck. I deleted adb_usb.ini and ran ‘android update adb’. No luck.

I brought my Nexus 4 to my brother’s apartment to confirm it wasn’t faulty. Worked on his machine without a hiccup.

I’m glad the clean install worked, because further troubleshooting was going to require swapping motherboards or buying a MacBook.

Changing USB mode from MTP to PTP worked for me.

How to do it on Windows 8 (I think, it will work for Windows 7 too)

Do not forget, that Android 4.2 now want you to submit RSA key from your computer, look at your device screen.

I ran into the same problems as the original question. Every approach I tried wouldn’t work…

Simple solution in the end

You need to install USB drivers only if you use Windows (If you’re using MAC/Linux, most likely it will work fine without any driver installations)

in the following link they describe how to do it:

My symptoms were the composite device (this contains all of the actual USB devices such as the ADB interface, camera, etc) was not being installed. This has a hardware id of:

The composite device’s children will have &MI_## after them. If you see those, then this is not the same issue.

I resolved this by coping usb.inf to %windir%\inf from a virtual machine of Windows 7. The hardware detected and installed fine after.

I have 2 Nexus 4 devices. One was connecting to ADB without any problems, the second one never showed up when I used the adb devices command. An additional symptom was, that the second phone did not show up as a portable device in Windows Explorer when the phone was set to Media mode.

At some point I found that a temporary solution for the second Nexus was to switch it to PTP mode. Then it was found by the adb devices command. The weired thing was that the first phone worked in both modes all the time!

Finally I found this solution that now allows me to connect both phones in both modes:

If you have a similar problem to connect your Nexus to ADB then I recommend to first switch it to PTP mode. If your problem vanishes with that step, I recommend to go through the additional steps listed above as MTP will probably be the mode you will want to set your phone to most of the time.

In case none of the answers work perhaps the following clarifications will help. I followed the top answer and tried to load the program with ADB from the command line to reduce the possible complications and this did not work.

Once enabling PTP mode the ADB devices command would find my Nexus 4, but I could not push to it. I had to use Eclipse and in order for the dialog to display to accept the RSA key described below.

Note: When you connect a device running Android 4.2.2 or higher to your computer, the system shows a dialog asking whether to accept an RSA key.

On Windows 7, with Samsung Nexus S, it showed nothing in Device Manager, the adb devices command showed no devices, but when plugged in device said USB debugging was on and connected.

I used Andrea’s Feb 2 answer to install the Google USB driver, which created the /gooogle/usb_driver directory and used RobertNovelo’s Mar 7 answer to go to the link and follow the instructions. The device showed up in Device Manager under ‘other’. I right clicked on it and selected update driver, and now it shows up in Device Manager under ‘Android device’, and now command line adb devices lists it.

I had a similar problem, and none of the previous solutions worked for me, and I’ve just solved it by myself (after a few hours of frustration), so I’m going to share my solution.

My computer suddenly stopped recognizing any Android device I’ve plugged in after it installed Android Composite ADB Interface for my Nexus 4. I was not able to uninstall the driver, because any attempt to do so by Device Manager was unsuccessful (Device Manager stopped responding every time).

So I’ve solved it this way:

I have a way to fix your problem:

My Windows 7 installation was not finding a driver at all. The xda-forums post has the right folder to tell Windows where the drivers are — {SDK directory}/extras/google/usb-driver.

If you don’t have the extras/Google folder + Tim Bellis, go to the SDK Manager in your IDE and look for the Google USB driver in the Extras category, and install it. I cannot tell you how to do this in Eclipse, but if you have IntelliJ IDEA, it’s near the bottom of the list, checkmark it and click “Install packages”.

(Windows 7) My solution to this was to find the device in Device Manager, uninstall the existing driver and install a new one from the android folder in your user account using the include subdirectories option.

Some of you may have experienced this issue. If you don’t find the USB driver (like me, I downloaded a bundle of Eclipse and the Android SDK), go to <sdk>/SDK Manager. Open it and select USB Driver from the options to install and you are ready. I had to do the PTP mode too.

If you have problems to install the ADB driver under Windows 8.1, try this solution: ADB Driver and Windows 8.1

For me, it was Nexus 4 and Windows 7. I reinstalled the drivers, changed to PTP – basically went through everything.

Clicking the tab that said MainActivity.java rather than activity_main.xml in Eclipse fixed it for me.

It was a driver missing problem with me. I had enabled the USB debugging, tried changing the USB cable, tried reinstalling the Google USB drivers, but nothing came to my rescue.

Then ultimately I downloaded the device drivers as suggested here.

To make sure whether you have a device driver problem, go to:

And see if you have your Nexus shown as an “Android device” or as a device in “Others“.

If it shows in “Others“, your problem should be resolved by downloading & extracting this and then following these steps:

Finally, your device will show up as follows: 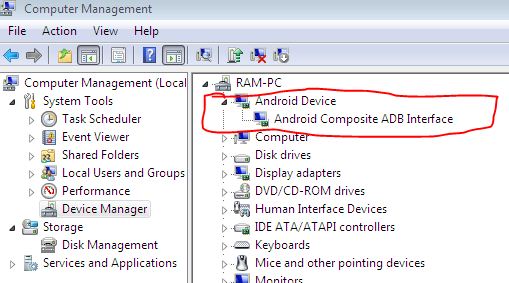 As soon as you do this, a popup will show up on your device asking for permission to debug. Once you accept, you are ready!

Previous article
android – How to set versionName in APK filename using gradle?
Next article
How to programmatically set maxLength in Android TextView?