android – Are there conventions on how to name resources?

Are there conventions how to name resources in Android? For example, buttons, textViews, menus, etc.

I don’t know whether there are any official recommendations.

For ids in my layouts with widgets and containers, I use the convention:

I do the same strategy for any dimens, strings, numbers, and colors I use in those layouts. However, I do try generalizing. e.g if all buttons have a common textColor, I won’t prefix the name with the layout. The resource name would be ‘button_textColor’. If all textColors are using the same the resource it will be named ‘textColor’. For Styles, this is usually the case as well.

For menu resources i use:

Animations are only different as you cannot use uppercase letters. Same goes for drawable xml resources, i believe.

Android SDK will be a good place to start.

For example, I try to scope IDs within the activity.

If I had a ListView it simply would be @android:id/list in all the activities.
If, however, I had two lists then I would use the more specific @id/list_apple and @id/list_orange

So generic (ids, …) gets reused in the R.java file while the unique ones (sometimes gets reused) get prefixed with generic ones separated by an underscore.

The underscore is one thing, I observed, for example:

Layout width is layout_width in xml and layoutWidth in code, so I try to stick to it as list_apple

So a Login button will be login, but if we have two logins then login_foo and login_bar.

Taken from Android’s documentation. There is more there on the subject.

To answer your question: Yes, there are.

You can find many of them via google search for example. And there is no such thing as the best naming convention. It always depends on your needs and your project attributes (most importantly the scope).

Recently, I’ve read quite good blog post about naming resources in Android XML from Jeroen Mols. Author mentions the basic principle all resources should follow and then how this convention is applied to each resource type. Both described on Android resource naming cheat sheet: 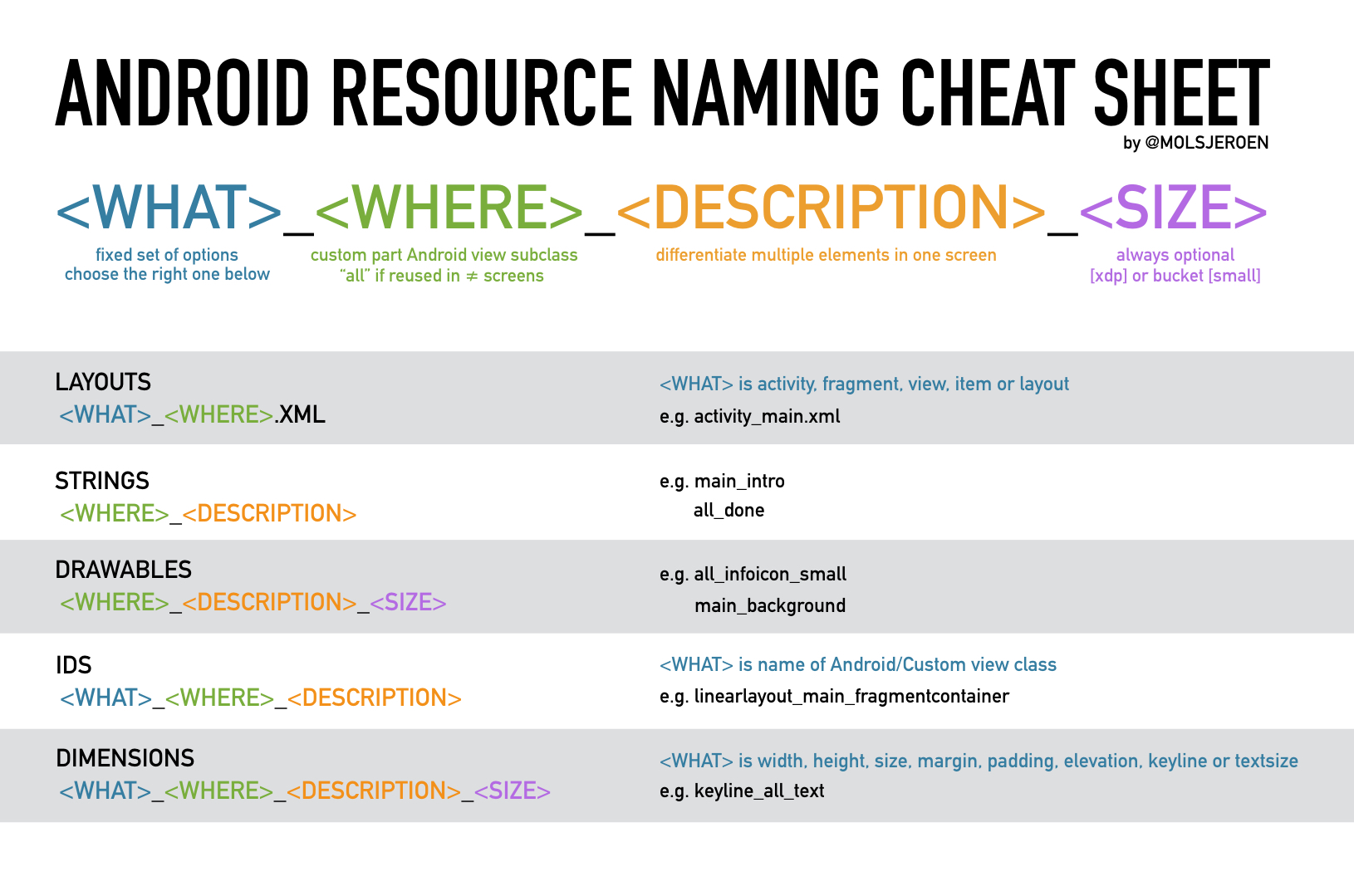 He then describes each element and each resource type in detail.

I would say you could use this convention from small to medium projects (personal use, few months contract applications). Although, I would not recommend it for long time projects with like 50+ activities or 1000+ strings.

Conventions for resource values in projects of such a large scale requires more investigation on how they will be used. Take strings for example. Might be affected by size of your team, translation center you are using (if any), VCS you are using (to avoid merge conflicts for example), etc. You might even think about splitting strings into multiple files.

I assume you are looking for something to begin with. So I would recommend the blog post I mentioned. It’s good for starters and you can definitely use it as inspiration to create good naming conventions of your own.

Also keep in mind that as a project grows, many needs and requirements may change in time. So its completely normal that naming conventions that were suitable in the beginning will not be suitable after 2 years. And it’s completely fine. You should not try to predict future. Just choose a convention and follow it. You will find if it is suitable for you and your project. If its not, think about why it is not suitable and start using something else.

There are a few conventions used in resources:

This “layout_blah” convention has also been used in a few other places. For example, there are “state_blah” attributes which are the drawable states a view can have.

Ultimately we don’t worry a whole lot about naming conventions for resources. The big one that we keep consistent is “mixedCase” for attributes, and the use of “layout_blah” to identify layout param attributes.

Also browsing through the public resources here should give a good feel for the conventions:

You’ll see the attributes are all quite consistent (given you understand the layout_ convention), drawables are all underscore_separated, etc.

This is a common problem to any language or framework, but so long as you avoid reserved words you should be ok assuming you can remember what you have called things.

I did note that Android places a restrction on xml resource file names but underscores seem to be ok. ADT actually states

File-based resource names must contain only lowercase a-z, 0-9, or _.

Something that tripped me up at first was a lack of namespaces with id’s, but this can generally be ignored if you have two id’s the same Android will just reuse the defined id.

For id’s I use a 3 letter qualifier followed by what it refers to in camel notation e.g lblFoo for a static text label (or textview), txtFoo for an editable textbox (edittext in Android). This may seem odd at first but I’ve been using it since VB6 and those controls were called label and textbox.

Here are some more I commonly use:

I use the same in code within the java file too so I don’t have to think about it, package scope will allow this quite happily:

You could if you prefer add a little spacing using underscore i.e btn_foo … I probably would do this if I could break old habits.

There are those who may argue that abbreviating these may not be ideal and the purists would argue that the full name should be used, but when you are naming dozens of controls and changing between different systems and frameworks, the full names lose their meanings, I have used these for over a decade in VB, C++, ASP.NET, WinForms in C# and VB.NET, Android and Python. I never need to remember if Android calls it a textbox or an edittext. All I need to know is that lblFoo is the static label and txtFoo is what the user types input into.

One final note is that no matter what convention you decide upon the important things is naming controls properly and consistently, so that you don’t wrestle with vague default id’s e.g TextView5 or a mixture of different conventions

Dimensions and sizes, naming conventions, styles and themes, nine-patch and so on.

I don’t think there is any standard convention promoted by Google. I’ve seen all kinds of different ways people name stuff, even within different official Google apps.

Whatever helps you the most when trying to make sense of a 100 layout (or drawables, menus, etc.) files in one directory hierarchy.

A short answer: if you would like to learn from Android developers, a good example is the support library v7 (https://dl-ssl.google.com/android/repository/support_r21.zip)

Logically, arranging resources should be no different than grouping java classes into packages (or putting files into folders). However, since Android resources have no namespaces, prefixes must be added to the resource name to achieve the same (e.g. com.example.myapp.photo becomes com_example_myapp_photo).

I suggest to divide the app into separate components (activities, fragments, dialogs, etc.) with short unique names that can be used as resource prefixes. In this way we’re grouping resources with related functionality together, which makes them easy to find (point 1) and we’re at the same time avoiding naming conflicts with both <include/> and library projects (points 4 and 5). Note that resources common to multiple components can still have a prefix (such as R.string.myapp_ok_button).

After the prefix, the name should tell us what the resource is used for (action to be performed, content to be displayed, etc.). Choosing a good name is important for understanding (points 2 and 3).

Sometimes “component_name” will give us enough information, which is especially true if the type is already given by the R class (in R.string.myapp_name_string the 2nd “string” is redundant). However, explicitly adding type can improve understanding (e.g., it can be helpful for translators to distinguish between a toast, or a label). Sometimes the “name” and “type” parts can be swapped to allow type-based filtering (R.string.photo_menu_* will give us only menu-related items for the photo component).

Let’s say we’re writing an activity for taking pictures, class com.example.myapp.photo .PhotoActivity. Our resources could look like this (grouped by the component “photo”):

If you poke around in Android’s documentation, there are various mentions of “best practices”, but there are certainly no concrete rules. For example, in Icon Design Guidelines, Google suggests naming icons with a “ic_” prefix.

A good place to start may be Providing Resources.

Also dig around in the SDK source/examples as well as on the Android Developers Blog if you want to see how the Google developers do things.

I found handy next naming convention for strings:

I generally followed the java naming conventions for resource ids(not for files for files) except I added “x” in front of the ids for example:

Here mTvName(It is in general android suggested naming conventions) and xTvName which was named in layout file as part of android TextView’s Id(x meant for XML),I followed this type of naming conventions for view objects such as Buttons and EditText etc.

The above conventions makes my life easier when I create complex layouts.
Just try to make your names as much as possible short in length and it is better if they are understandable and meaningful to other co-developers(but it may not possible every time),Hope that my experience will help others,suggestions are welcome.

In our android projects there are lots of components like buttons, labels, textboxes. So simple name like for example “name” this is very confusing to identify “name” is label or textbox. Mainly it happen when you are maintaining projects developed by some other developers.

May be this is helpful for you.

There are some restrictions:

By the way, it is more advisable to follow the guidelines or to learn from standard code.

Previous article
Android Task Affinity Explanation
Next article
android – How to get an enum which is created in attrs.xml in code