I am trying to get my first taste of Android development using Eclipse. I ran into this problem when trying to run Eclipse, having installed version 4.2 only minutes ago.

After first trying to start Eclipse without any parameters to specify the Java VM, I got an error message saying it couldn't find a Java VM called javaw.exe inside the Eclipse folder, so I found where Java was installed and specified that location as the parameter in the shortcut’s target. Now I get a different error, Java was started but returned exit code=13.

Similar questions seem to indicate that it’s a 32-bit/64-bit conflict, but I’m 99% positive that I downloaded 64-bit versions of both Eclipse and Java (RE 7u5), which I chose because I have 64-bit Windows 7.

There are working combinations of OS, JDK and Eclipse bitness. In my case, I was using a 64-bit JDK with a 32-bit Eclipse on a 64-bit OS. After downgrading the JDK to 32-bit, Eclipse started working.

Kindly use one of the following combinations.

Your version of Eclipse is 64-bit, based on the paths and filenames.
However, the version of Java that it’s picking up is 32-bit, as indicated by where it is coming from, on this line:

This can happen when a system has more than one JVM installed, as is often the case on Windows 64-bit (for example, the JRE download page uses the bit-ness of the browser to determine what bit-ness download to offer you, and many people use(d) 32-bit browsers even though they run 64-bit Windows).

The best way to fix this, assuming you do in fact have 64-bit JRE or JDK on your system, is to specify in eclipse.ini exactly which JVM you want it to use. The instructions are detailed in the Eclipse wiki page, but basically you have to specify the -vm option in the ini file – make sure to read the wiki page carefully as the format is very specific.

Specifying the JVM path in eclipse.ini is strongly recommended because doing so isolates Eclipse from any potential changes to your system PATH that some program installers might make (I’m talking to you, Oracle!).

Another option would be to download and use 32-bit Eclipse instead of 64-bit, but it’s still strongly recommended to specify the path to the JVM in eclipse.ini.

To check your version of Java, run

Note the 3rd line, which shows that this is a 64-bit version.

If you are on a 64-bit machine, then you can install the 64-bit JDK and uninstall the 32-bit one. For instance on Windows 10, just go to Settings and under Apps, you will find Java. Click on it and you will find all the different versions. Now you can select which one to uninstall.

I got this error and found that my PATH variable (on Windows) was probably changed. First in my PATH was this entry:

…and Eclipse ran "C:\ProgramData\Oracle\Java\javapath\javaw" – which gave the error. I suspect that this is something that came along with an installation of Java 8.

I have several Java versions installed (6,7 and 8), so I removed that entry from the PATH and tried to restart Eclipse again, which worked fine.

If it’s doesn’t work for you, you’ll need to upgrade your JDK (to the Java versions – 8 in this case).

Instructions on how to edit PATH variable

Under ‘System variables’ in the ‘Path’ variable there was the following first:

I removed this and Eclipse worked again!

I had the same issue, Java was started but returned exit code=13.

That worked for me.

The issue was fixed by doing the following steps.

Please find the screenshot for the same.

Adding vm argument to .ini file worked for me

The strangest fix ever. Look at your Eclipse path, and make sure you do not have strange characters (like !, #, and @). It worked for me.

I uninstalled Java update 25, and the issue was solved.

A clean reinstall of the Java JDK did the trick in my case. I am running Eclipse 4.4 (Luna) like a charm now.

I had this message when I had forgot to install the JDK.

It turned out I only had the 32-bit Java runtime installed.

All Eclipse really wanted was for me to install the 64-bit Java runtime. <= SOLVED

You have to go to the folder where eclipse is installed and then you have to change the eclipse.ini file.

You have to add

Your eclipse.ini file will look like the below screenshot 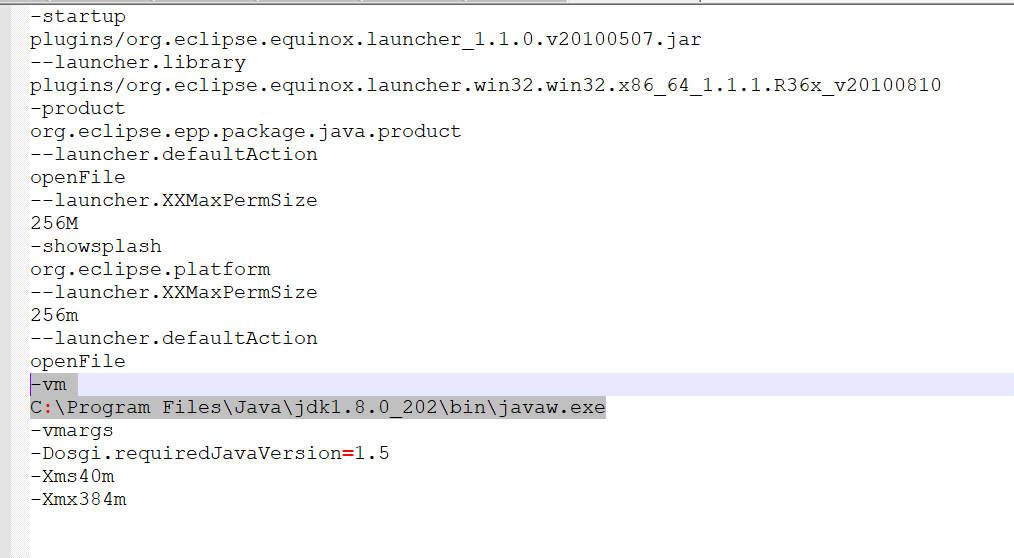 The best answer here is too long. I cannot comment so I added my answer.

I had the same problem. I was using Windows 8 with a 64-bit OS. I just changed the path to Program Files (x86) and then it started work. I put this line in the eclipse.ini file:

If you install a 64-bit Eclipse version on a PC with a 32-bit JRE this is guaranteed to occur.

So the solution is quite straightforward: You need to synchronise them by updating either one. This shall happen when downloading Oracle Fusion middleware and Eclipse expects a 32-bit environment while your JRE is 64-bit and your JAVA home is pointing to a 64-bit JDK. 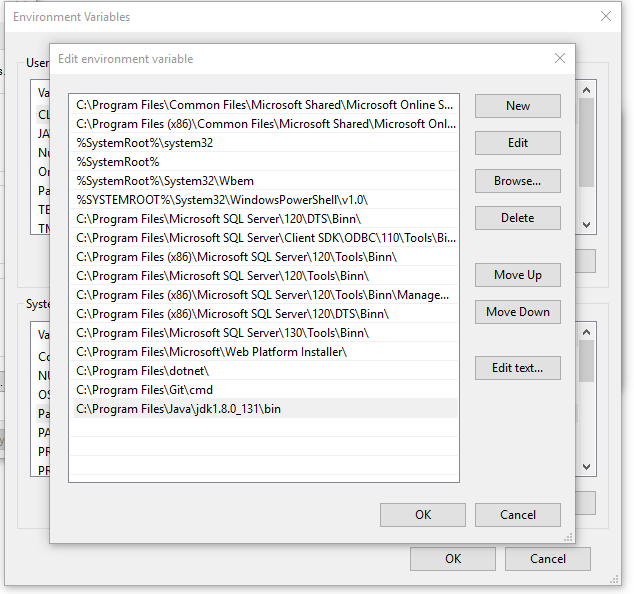 I had this issue. I installed Java 8 update 25 via Chrome, and therafter attempting to start Eclipse gave the mentioned error.

I tried some of the solutions, but not worked for me.

Finally, I found another way, …

Set C:\Program Files\Java\jdk1.7.0_02\bin\javaw.exe to the path in the system variables.

Try it. It worked for me…

I tried the following solution:

After that, I launched Eclipse, and it worked for me.

I also encountered the same issue. It turned out that the environment variable Path was pointing to an incorrect Java version.

Please check the environment variable and point it to the correct Java. For example:

To check the environment variable, go to:

I have just solved the same issue upon setting up my Windows 8.1 PC. Exactly like @George Papatheodorou mentioned above (sorry I cannot add a comment), Eclipse and JRE must be both 64 bit or 32 bit.

However, it seems for Windows 8/8.1 environment, you are going to get 32-bit JRE by default (and I do not know where to change that default for the download), as explained here: http://java.com/en/download/faq/win8_faq.xml

I was using 64-bit Eclipse so there was a discrepancy. I then installed 32-bit Eclipse and everything works fine this time.

So before bothering changing any environment variables, check your JRE and Eclipse version.

Of course you can use 64-bit JRE with 64-bit Eclipse. Just make sure they match because Windows 8.1 will give you 32-bit by default.

I had a similar error after installing Java 8 on my Windows 7 system, 64 bit system.

Changing environment variables, etc. did not help. So I tried to remove the Java Update 8, but that too did not help. Downloading and installing the 64-bit version of Java 8 SDK fixed my problem. I hope this helps.

Please check whether you have set two JAVA paths in the Environment Variable section. If you already installed two versions of the JDK, it might be, then double check you have put PATH for Java like below.

If both are there, then this sort of error may occur.

If it’s OK, then check in the “.ini” file the below area is OK or not.
Open “.ini” file and check

If not, please set it like that and run again.

It could be due to too little memory. You can modify the eclipse.ini file to increase the memory. Something like this might help you: FAQ How do I increase the heap size available to Eclipse?

Previous article
How to manage startActivityForResult on Android?
Next article
android – Ship an application with a database