I’m having a problem with emulator-5554, it keeps telling me it is offline.

Even after a fresh restart, I try that command and it still says it is offline.

The problem is when I try to install .apk files to the emulator using abd install <path> from the command prompt, it tells me that it is offline, if I create another device and run that one, then try to install the .apk files, it says I have too many devices connected. So in other words, I can’t install my .apk files.

How in the world can I get rid of that damn emulator-5554? I heard that if you do a restart, it should clear all the devices, but that does not seem to be working. It is like it is getting initialized when my computer starts up. Has anyone run into this issue?

In such a case, you can do all of the following in order to be assured that your emulator starts working again :

That’s it! It will take a while and it should resolve your problem. 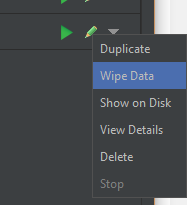 The way that Android detects emulators is by scanning ports starting at port 5555.

The number you see in the adb devices list (in your case 5554) will be one less than the port that adb is finding open.

You probably have a process running that is listening on port 5555. To get rid of the “offline” device, you will need to find that application and close it or reconfigure it to listen to a different port.

This solution is for Windows.

In this case, 12b80FF443 is my physical device, and the emulator-* entries are garbage.

What a surprise. It’s ADB. As noted by other answers, it could be other programs, too.

ADB re-starts (as it was previously killed), and it detects no more fake emulators.

If you are on Linux or Mac, and assuming the offline device is ’emulator-5554′, you can run the following:

Which yields the following output:

This tells me that the process id 4848 (yours will likely be different) is still listening on port 5554. You can now kill that process with:

and the ghost offline-device is no more!

In my case, I found some process that makes adb not work well.
You can try to kill some strange process and run “adb devices” to test.

It worked for me:
kill the process name MONyog.exe

I solved this by opening my commandprompt:

After starting up, ADB now detects the device/emulator.

I also had the same issue. I’ve tried all described here solutions but they didn’t help me. Then I’ve removed all emulators in the Android Virtual Device Manager and created new ones. The problem was in CPU/ABI system image configuration of the Android Virtual Device Manager. On my Windows10 machine emulator with system image x86 always is offline where emulator with system image x86_64 is working fine as expected. Just be aware of this

From the AVD Manager try the “Cold Boot Now” option in the drop-down. It worked for me!

I finally solved this problem,
I had to go to the Developer options from the Settings in the Emulator,
then scrolled down a little, turned on the USB debugging. Instantly my device was recognized online, and I no longer faced that issue. I tried restarting android studio and emulator, killing adb process, but those did not work.

and be happy with adb))

restarts it without all pain above.

The “wipe user data” option finally solved my problem. just wipe user data every time you start the emulator. This always works for me!
I use windows 8 x64 , eclipse

Enable USB Debugging into your emulator

Did you try deleting and recreating your AVD?
You can manually delete the AVD files by going to the directory they’re stored in (in your user’s /.android/avd subdirectory).

Go to windows task manager and end process “adb.exe”. There might be more than 1 instances of the same process, make sure to end all of them.

Do you have bluestacks installed? If you do, the background processes that it runs creates the offline device “emulator-5554”.

In my case, the emulator was working with Oreo and lower, but not with Pie, and everything I tried seemed to have no effect. What finally worked was updating the emulator to latest (version 28).

In my case, I started in ‘Cold Boot Now’ and clicked on Message to allow the connection.

I was immediately able to use “adb shell” after that point.

(Make sure that only One emulator running at a time.)

If the emulator is already open or executing it will tell you is offline. You can double check on the Command Line (Ubuntu) and execute:

You must see your emulator offline, you have to close the running instance of the emulator (since the port will show as busy) and after that you can run your application. Hope this helps someone.

You might have to reconfigure and wipe the virtual device with AVD Manager, make sure you choose x86 version.

will show you the pid of process that are taking the port (should be the second column) so to kill it:

then adb (fake) devices will no longer show on the list

if doesn’t checked , check this option and close your virtual device and re-open it . this worked for me.. good luck!!

In my case the cause was that I had resumed a VM with android-x86 inside. Rebooting the VM with Android-x86 and restarting the adb server fixed the problem.

That is because of the fact that you have another virtual device installed on your machine. It might be Bluestacks as I also faced a similar problem. I uninstalled Bluestacks and then checked
adb devices
It was running fine then.