This problem was discovered when I tried to run the Android emulator in Eclipse. Can’t figure out what happened. I searched online for the solution, but it seemed to be vague and I don’t understand clearly.
I was following the steps to install the AVD according to the sites and I can’t figure out what I missed. Please explain it to me in steps to follow.

The “ARM EABI v7a System Image” must be available. Install it via the Android SDK manager: 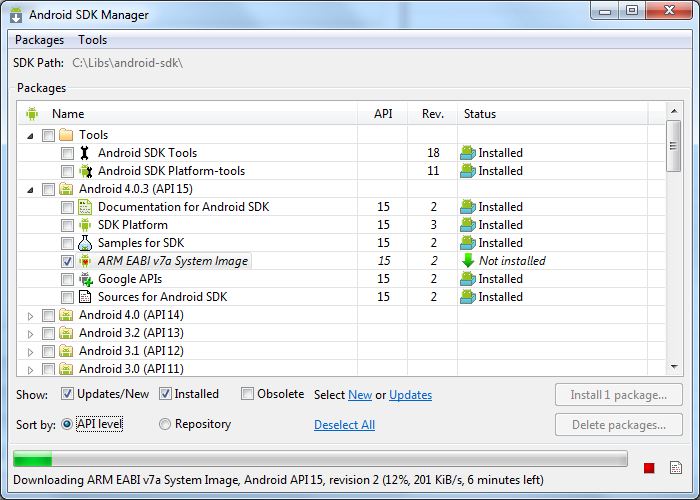 Another hint (see here) – with

you are able to turn on GPU emulation to get a faster emulator: 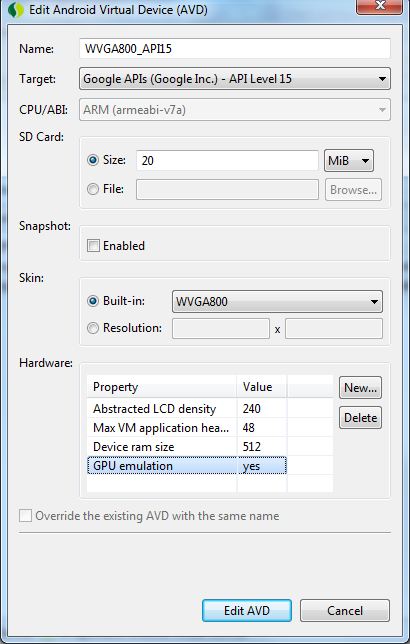 Note : As per you786 comment if you have previously created emulator then you need to recreate it, otherwise this will not work.

Alternative 2
In the comments of the post above you can find a reference to Genymotion which claims to be the “fastest Android emulator for app testing and presentation”. Genymotion runs on VirtualBox. See also their site on Google+, this post from Cyril Mottier and this guide on reddit.

Alternative 3
In XDA-Forums I read about MEmu – Most Powerful Android Emulator for PC, Better Than Bluestacks. You can find the emulator here. This brings me to …

Alternative 4
… this XDA-Forum entry: How to use THE FAST! BlueStack as your alternate Android development emulator. You can find the emulator here.

Another reason you can get this error is that Eclipse can’t find the correct file.

Check out where Eclipse is looking for your SDK files. You can do this on the command line. Below is an example for the windows command prompt for an avd I created and named ‘SonyTabletS’:

The first line returned shows where eclipse is looking for the SDK files and will look something like:

Make sure that location is correct.

In my case, ANDROID_SDK_ROOT was initially set incorrectly to my home directory. This is because I set it that way by blindly following the Sony Tablet S SDK install instructions and adding an ANDROID_SDK_ROOT environment variable with the incorrect path.

I had the same problem. In my case it turned out I had installed another version of the sdk alongside the version provided by Android Studio. Changing my ANDROID_SDK_ROOT environment variable to the original value fixed it for me.

emulator: ERROR: This AVD’s configuration is missing a kernel file!
Please ensure the file “kernel-ranchu” is in the same location as your
system image.

In that system image folder there was a file called “kernel-qemu“. I just renamed it as “kernel-ranchu” and it worked…

Here’s my story. Under ‘Actions’ on the AVD manager, I viewed the details for the AVD which wasn’t working. Scrolling down, I found the line:

I then navigated to this file at:

I found there was no kernel file. However, I did find a kernel file at:

So I copied it and pasted back into:

The AVD then worked.

If you know the kernel file is installed on your machine, then problem is getting emulator.exe to find it.

My fix was based on the post by user2789389. I could launch the AVD from the AVD Manager, but not from the command line. So, using AVD Manager, I selected the avd I wanted to run and clicked “Details”. That showed me the path to the avd definition file. Within a folder of the same name, next to this .avd file, I found a config.ini file. In the ini, I found the following line:

I looked in the folder C:\Users\XXXX\android-sdks\system-images\android-19, and found that the image.sysdir.1 path was invalid. I had to remove the “default” sub folder, thus changing it to the following:

I saved the ini and tried again to launch the AVD. That fixed the problem!

Make sure that you also have configured properly an emulated device. Android Studio may come with one that shows up in the list of emulated devices but that is not set to work with the SDK version you are using.

Try creating a new emulated device in the AVD Manager (Tools->Android>AVD Manager) and selecting that as the target.

I installed Android SDK manager and Android SDK yestoday, and I get this error too when I tried to run the Android emulator immediately. But, right now this error disappear, I think restarting your system when the SDK has installed may solve this problem.

A singular intelligent thought occurred to me after a long day of repair/rebuild/upgrades of the SDK/NDK & JDK. The environment vars need examined, as the fix for my AVD ‘GalaxyS3’ missing kernel file was to expand the system-images reference to absolute.

Adding the “C:….sdk\” to the ‘image.sysdir.1=’ entry in the ‘workspace’.android\avd\GalaxyS3.avd\config.ini file solved the problem (for now).

I updated my android SDK to the latest version (API 19). When I tried to run the emulator with phonegap 3, the build was successful but it ran the same issue.

In the AVD manager there was an existent device, nevertheless, its parameters were all unknown. Surely this occurs because I uninstalled the old sdk version (API 17) that returns a second error while attempting to remove the device. With the message: “device is already running”

To solve the issue, I went to the AVD’s location in ~/.android/avd/ and removed manually the device directory.avd and device.ini file. Finally, in the the device manager I created a new AVD provided by the newest API.

This allowed phonegap to build and run the emulator succesfully

I hope this helps

This worked for me. Try rebooting your system if it is not working for you.

I tried what ChrLipp suggested, but that wasn’t the problem, as the image was already installed. What I did was run:

app started working, without the “missing a kernel file” error.

I fixed this problem just adding the Enviroment variable ANDROID_SDK_ROOT, in my case this was located at C:\Users\fera\AppData\Local\Android\sdk

In my own case, I had multiple errors most of which were about mis-configured ANDROID_SDK_ROOT, at the end of the day, one thing seemed to fix the whole thing.

After Creating the A new Emulator Device on AVD, go to the Actions menu and click on the arrow pointing downwards as shown below.

Now, fix in the path of the Android Sdk to make a complete path.

If you noticed, the android sdk path shown above is different from the normal default android sdk, I had to move it to C:/androidsdk to avoid NDK issues as my main USER HOME on my PC has whitespaces which NDK might not support.

NOTE: Moving the SDK directory away from its default directory is usually the cause of these errors AVD emulator gives, most especially as regarding broken and misconfigured path. The fix I provided above is a quick fix, you may have to do that each time you create a new device on AVD Emulator.

This fix should also work when working on CMD with cordova .

To solve this problem, you need to specify the -kernel path manually. i.e.

Below command is to check the emulators available for command line.

And also, ensure that your emulator path is correct, i.e. the one located at ~/Library/Android/sdk/emulator/.

Just wanted to share my experience on this problem. Consulting each of the answers here, it didn’t match my situation. Having a system image for Android API 22 causes this error and the weird thing is that all of the environment variables pointing to the correct directories. It doesn’t make sense.

@BuvinJ answer had shed some light into the problem. I did check on the path describe on his answer and yes my copy of system image resides under the subfolder default when I look on the user directory (on Windows).

The weird thing is, there is also an android-sdk folder in the ANDROID_SDK_ROOT so I thought maybe Eclipse is looking there. Digging through the subfolders I figured out that the directory looks like this:

This directory resides on the ANDROID_SDK_ROOT. There is also another one residing at the user directory user/XXXX/android-sdk/.

Eclipse is expecting it here:

Just changed the directory as such and it works now.

Update the following commands in command prompt in windows:

1)In the command prompt it asks you for Y/N .click on the Y then it proceeds with the installation.
2) It updates all Kernel-qemu files and qt5.dll commands. so that the Emulator works fine without any issues.

For me Updating the SDK Tools fixed the errors. 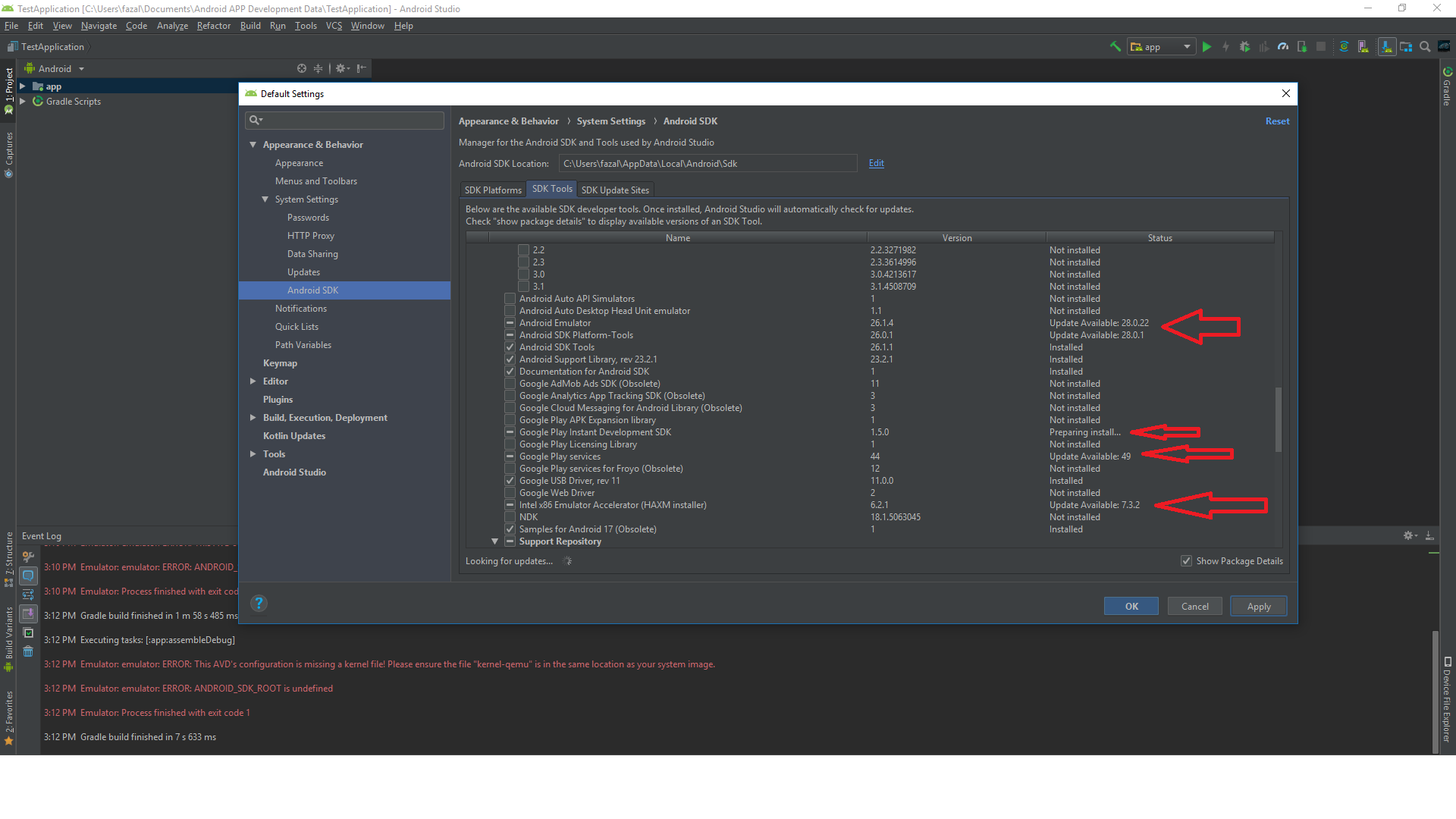 I solved this by updating SDK Tools and Platform-tools in the Android SDK Manager to newest version.

Previous article
android – Register Application class in Manifest?
Next article
How to use custom font in a project written in Android Studio