android – error "Could not get BatchedBridge, make sure your bundle is packaged properly" on start of app

Trying to create a react-native project on Android 4.4.2 I get this error screen 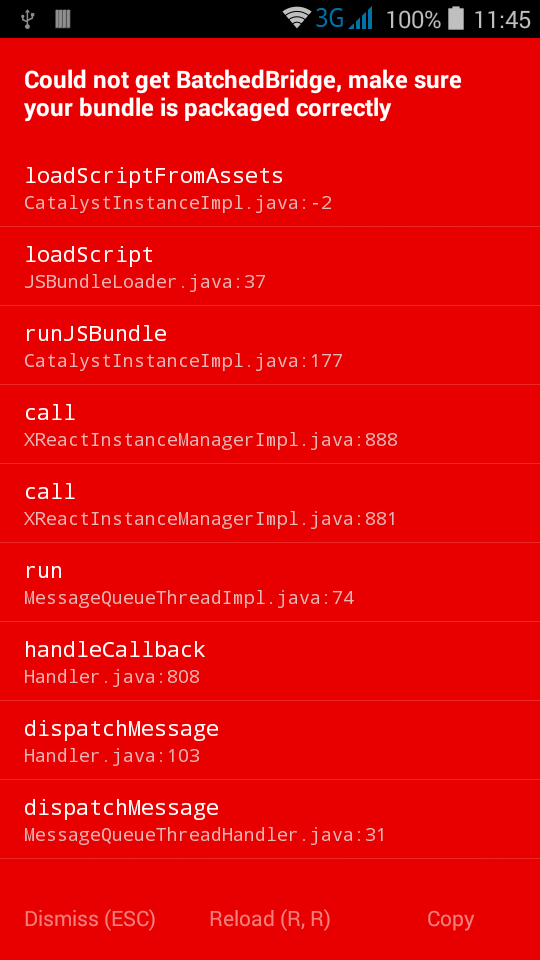 and couldn’t find any way to resolve it. I tried restarting packager, reconnecting device, even reinstalling react native and starting new project. On 6.0.0 and later versions it works just fine.

A possible solution for this is that you most probably not bundling your application first, perform the following steps and then deploy your app-debug.apk to your device

(if the folder assets does not exists create it)

Then run from project root

install the created apk to you device, from location: android/app/build/outputs/apk/app-debug.apk

let me know if that fixes your issue

You can simply put it to your package.json as a script to automate it, I believe it will be fixed in upcoming releases of react-native and will be executed prior assembling the final APK, hence this won’t be needed (I hope as well)

or as mentioned the curl equivalent, but for most cases the above is more robust

I came across this issue as well.
What I did was force kill the app on my device, then I opened up another console and ran

and then I opened the app again from my device and it started working again.

EDIT: If you are using an android device via USB and have unplugged it or your computer went to sleep, you may have to first run

Just got this error. Here’s what I did to fix:
I selected Dismiss, Went into the Developer menu, then Dev Settings,
Choose Debug server host & port for device, I added my computers IP address and the port: 192.168.0.xx:8xxx, use whatever your developer machines assigned IP address is on your wifi network. The port is usually :8081

Once I did this, all went well. Also, while you’re in the dev menu remember to select Enable Live Reload and Debug JS Remotely, it makes your life much-much easier while debugging.

This is what worked for me (After trying every other solution i found …):

I got this also when I started for the first time with React Native, using a physical device. If that’s the case, you need to do some extra things before you can get started. You have to enter some information about your development machine in the ‘Dev Settings’ of React Native.

When you see the error, shake your device. A dialog will popup, the last option will be ‘Dev Settings’. Select ‘Debug server hot & port for device’ and enter your local IP and the used port (usually 8081).

See the last paragraph of https://facebook.github.io/react-native/docs/running-on-device-android.html

If none of the solution work for you try this:

I found that my <root>/android/app/build/intermediates/assets/debug folder was empty and by running cd android && ./gradlew assembleDebug was not creating those files required, which are later used by javascript thread in our react native apps.

I ran manually the following command which the debug build command should have created ideally.

And then a I ran again cd android && ./gradlew installDebug my app started working again.

Will debug more and would update what is failing actually.

In a separate terminal, connect your device to the computer and run the following commands:

Try this command in terminal and then reload. It worked for me

It’s little too late but this really works for me.

First command will build apk for android and deploy it on your device if its connected. When you open the App it will show red screen with error. Then run second command which will run packager and build app bundle for you.

I went opened the .buckconfig file and changed the line:

Because i saw in SDK Manager that Android 6.X has api level 24.

For me, it’s because adb was not in the PATH. It’s located /Users/man/Library/Android/sdk/platform-tools for me, it may be somewhere else for you, but anyway, find it and add it to your path to see if that help.

Since you are using Android < 5.0 you can’t use the default adb reverse method, but Facebook has added official documentation to connect to the development server via Wi-Fi, which would support your version. Quoting the instructions for MacOS, but they also have them for Linux and Windows:

You can also connect to the development server over Wi-Fi. You’ll first need to install the app on your device using a USB cable, but once that has been done you can debug wirelessly by following these instructions. You’ll need your development machine’s current IP address before proceeding.

You can find the IP address in System Preferences → Network.

Make sure your laptop and your phone are on the same Wi-Fi network.
Open your React Native app on your device.
You’ll see a red screen with an error. This is OK. The following steps will fix that.
Open the in-app Developer menu.
Go to Dev Settings → Debug server host for device.
Type in your machine’s IP address and the port of the local dev server (e.g. 10.0.1.1:8081).
Go back to the Developer menu and select Reload JS.

It had this issue “randomly” and took me sometime to realize what was wrong in my scenario.

After I have updated to React-native-cli 2.0.1, there was a message output to the log which helped me to dig and find the root cause:

After researching some links I found this one:

Since I´m on windows, I ran netstat and found out that my VLC player was also running on port 8081 causing the issue.
So, in my case, if I started the vlc server prior to the react-native server it wouldn´t work.

This same log message wasn´t output on previous versions of the react-native-cli, making it fail silently.

TL, DR: check if there´s anything running on the same port as the package manager (8081 by default)

My issue was that I went through my AndroidManifest.xml file and had removed the line

because my app will not need internet. However, the react native debugging app does need internet access (to access the packager) Whoops. 🙂

I got this error too, really confused. cuz all answers does not work.
Just after add adb to path.

For me, I had side-sync enabled and active. Closing it imediately made the issue go away. It might be worth closing this or any other communication between PC and device

I ended up having to open up the port that I was using (8081 by default). On Linux, you can do the following

After that in your device using:

See in console react-native, it will be fetch js bundle data.

I had the same problem. When I did create a react native project via create-react-native-app AwesomeProject it worked well in Expo app on phone. After that I wanted to use that quickstart project for developing my project and got same error as you do.

After some research I find out it’s better to start new project with react-native init AwesomeProject (with all setting in react native docs) Then run this command:

All you need to do for app to run on your virtual / real device is:

And it should be working just fine. At least it worked for me.

For me the problem was that ‘adb’ was not recognised – check this answer.

To fix this add C:\Users\USERNAME\AppData\Local\Android\sdk\platform-tools to Environment Variables

Please check if you have following error when you run react-native run-android:

Most of us face this problem for the first time, when we start react native project#1.

after doing above replacement, just run react-native run-android in your cmd, it will bundle apk and at first try to install js bundle locally in your device. (Got Success)

I tried many of the suggestions above/below, but ultimately, the issue I faced was a permissions one with watchman, which was installed using homebrew earlier. If you look at your terminal messages while trying to use the emulator, and encounter ‘Permission denied’ errors with regards to watchman along with this ‘Could not get BatchedBridge” message on your emulator, do the following:

Go to your /Users/<username>/Library/LaunchAgents directory and change the permissions settings so your user can Read and Write. This is regardless of whether or not you actually have a com.github.facebook.watchman.plist file in there.

I found that I needed to also add in a

to get the application to run correctly.

From Android studio, I was launching installDebug/installRelease gradle script from app projet instead of root projet.

Simply restart your system or your complete bundle and the issue may be fixed.

Previous article
What is android:weightSum in android, and how does it work?
Next article
android – Callback to a Fragment from a DialogFragment