Every time I try to export an APK from Eclipse (tried Juno and Indigo) on Mac, eclipse crashes after a few seconds

This used to work fine on my current setup.

The error from the console is:

Any ideas of different methods I can try, or other ways to investigate what’s going wrong?

Update: For anyone coming along post-2014, you should be using Android Studio, which doesn’t have this problem.

Disable Project/Build Automatically when you are exporting

I think is a problem of Eclipse unable to detect the Android command is still working or something similar.

Of course there is ever the option of APK generation using Ant outside Eclipse you can generate an Ant build.xml from your Eclipse project more info in official Android docs

Disable Project->Build Automatically. I’ve noted that this works for me. 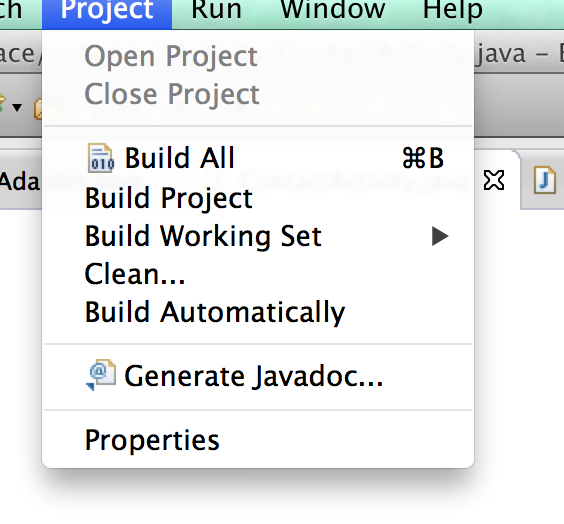 This seem to be problem with your JVM. Can you update your java and check again. Also check this link

project/ clean worked for me. I think it could be related to the building of the project, as other users have posted.

The problem has gone until I have update ADT and Eclipse. I don’t know which one solve the issue.
Now it’s working smoothly for severeal signed export, with:

UPDATE: Few exports after, I still get crashes from time to time, but no very frequently.

may be you should try to add execute authority . you can try something like this

done and good luck to you