android – Google Maps are not showing in signed apk

I know this is a common question and usually the solution is to generate a separate key for release. I’ve done it several times and my API key in developers console contains two different SHA1-fingerprints: one for debug from AndroidStudio and on for release from my own keystore. I have signed the app with the same keystore and enabled Google Maps Android API v2 in the console. But still the maps activity shows just the white screen with ‘Google’ in the left bottom corner.

Are there any suggestions how to solve the problem?

It’s a little confusing, because when the project is in Android view, you can only see the debug file (although it should have (debug) in parenthesis next to it in that view).

In order to modify the release version, switch to Project view by using the dropdown in the upper left of the Project Explorer. Then, expand app/src/, and you will see subfolders debug and release. Under there, you should see two separate google_maps_api.xml files under debug/res/values and release/res/values.

Make sure that the API key is populated in the google_maps_api.xml file under the release/res/values folder, since this is the one that will be used for the signed release apk. 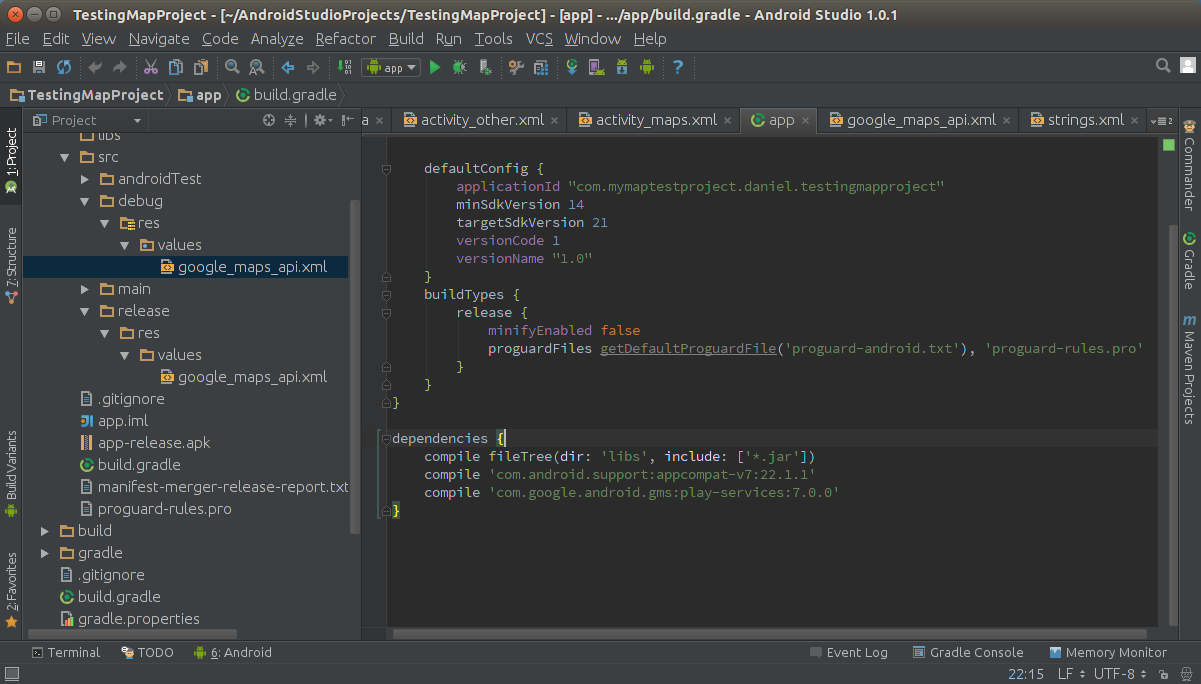 If you chose Google Play App Signing then your App’s SHA-1 will be different one when it will be released.

Because Google remove your uploaded certificate and then sign the App with a new one,

So you have to know the new SHA-1 key.

you are using a version of sha1. you need to again generate SHA1 using command prompt after making you apk signed.

Steps to regenerate SHA1 is go to cmd and give the command like below:

1)go to your java in program file open java version like jre1.8.0

2)open bin folder and run command like above follwed by your key store path that you have generated when you generated the signed apk
after running this command on cmd you need to provide password of signed app and your SHA1 will be gerarated.

3)copy the sha1 and paste into console.developer with your package name within your api key.

It’s too late to answer but may be helpful for others if they phase the same issue.

To get released SHA open your terminal and type

and then check SHA, it should be the same as it is used in google api console.

Previous article
php – Are scalar and strict types in PHP7 a performance enhancing feature?
Next article
android – How to add radio button dynamically as per the given number of counts?