I am getting the following error when trying to publish a new APK in Google Play:

I previously published only on Beta channel an APK with a target SDK of 23 in the manifest, just for testing.
I assume this is what causing the issue.

Does this mean I can’t ever publish another APK with my regular manifest, which has a lower target SDK?

Did anyone encounter this and know of a way around it?

i want to show you something. hope you understand! 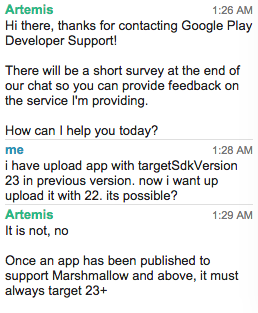 I’ve hit the same thing. I’m stuck on Marshmallow because I upgraded my target SDK in Beta.

One would think that you can back out as far as you want on a beta or alpha channel as long as it has not been published to production. That is the way it would work in the real world.

You only have a hind-site workaround.

The workaround is to not to develop for Marshmallow in Beta on your production app. Create a new application in Google Play and develop there until it is ready. This will also let you update the production code if a bug fix comes up before your marshmallow release.