android – How to get list of downloaded apps (paid/free) by a user from Google Play?

I recently came across this app Purchase Apps, which is somehow able to retrieve apps I’ve paid for in google play after I signed in using my google account.

I’m trying to find out how it is being done as I want to build a similar app, but for the free apps which were downloaded.

However, I can’t find which OAuth API Scope was used for retrieving that information, even after going through the entire list of APIs. 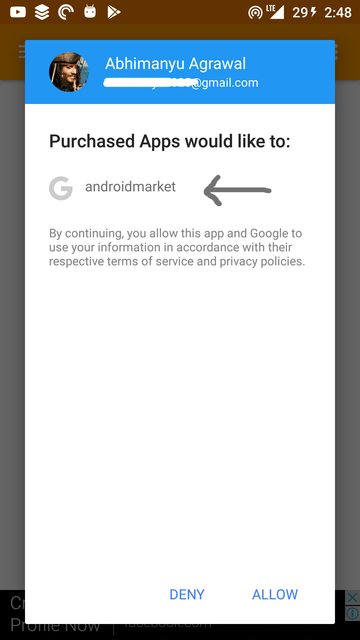 EDIT:
I’m putting a new bounty on this question, as suggested by a similar question I’ve asked about here, and because here and there I don’t see a real answer about how to do it, and what can be done with it.

I’d like to refine the questions into multiple pieces:

EDIT: I’m putting a max bounty on this, because no matter how much I’ve read and tried, I still failed to make a POC that can query the apps from the Play Store that the user has ever downloaded (name, package name, date installed and/or removed, icon URL, price…), including both paid and free apps.

If anyone finds a working sample, show how it’s done, and also show how you’ve found about it (documentation or anything that has led you to the solution). I can’t find it anywhere, and the current solutions here are too vague for me to start from.

Issue is resolved. The exploit has been closed.

We will be closing this bug due to being logged in a Preview version of Android. If the issue is still relevant and reproducible in the latest public release (Android Q), please capture a bugreport and log the bug in https://source.android.com/setup/contribute/report-bugs. If a reply is not received within the next 14 days, this issue will be closed. Thank you for your understanding.

This is a bug and Google will address it in the next update.

We’ve deferred this issue for consideration in a future release. Thank
you for your time to make Android better

This answer has turned into a conglomeration of ideas and been edited to include information from discussion in the comments.

The androidmarket api, would be a customised api written by the developer. It’s not available to the public.

To address your concerns in the comments. The developer would have utilised the current apis available through Android Developer and Google to create a project that manages all of these.

I’d recommend using the AccountManager, which is part of android.accounts, has access to credentials and a method getUserData. The account manager has access to passwords and is capable of creating and deleting accounts. This, possibly used with Content Provider

This blog should help you to get started. Write your own Android Authenticator.

How these apps actually work, I cannot tell you. They may also have different implementations (unless they’re a collaborative effort behind the scenes, they most certainly will be different).

There a definition for scope, to determine the extent of the permissions the app is granted.

If full access can be gained a list of all apps used by the account holder can be found and compared to what’s on the device.

Package Manager will retrieve a list of all apps currently installed on the device.
PackageInfo provides the details about the app.
INSTALL_REASON_USER will also filter out apps that have been actively installed by the user.

A helpful link is the OAuth 2.0 Playground.

This github repo node-google-play, using node, is current and will call Google Play APIs. As did the archive that was used as an “unofficial” api, android-market-api, to query the market place.

The app claims to use the following permissions:

Noteworthy, the app doesn’t set any permissions when there was a basic, install. I was unable to use any of the features, as I have no paid apps. So for the initial search – there were no permissions needed, which would indicate the app didn’t have access to my account.

I checked the permissions – there were none set. So the only thing required was to accept the pop up, as displayed in your question. 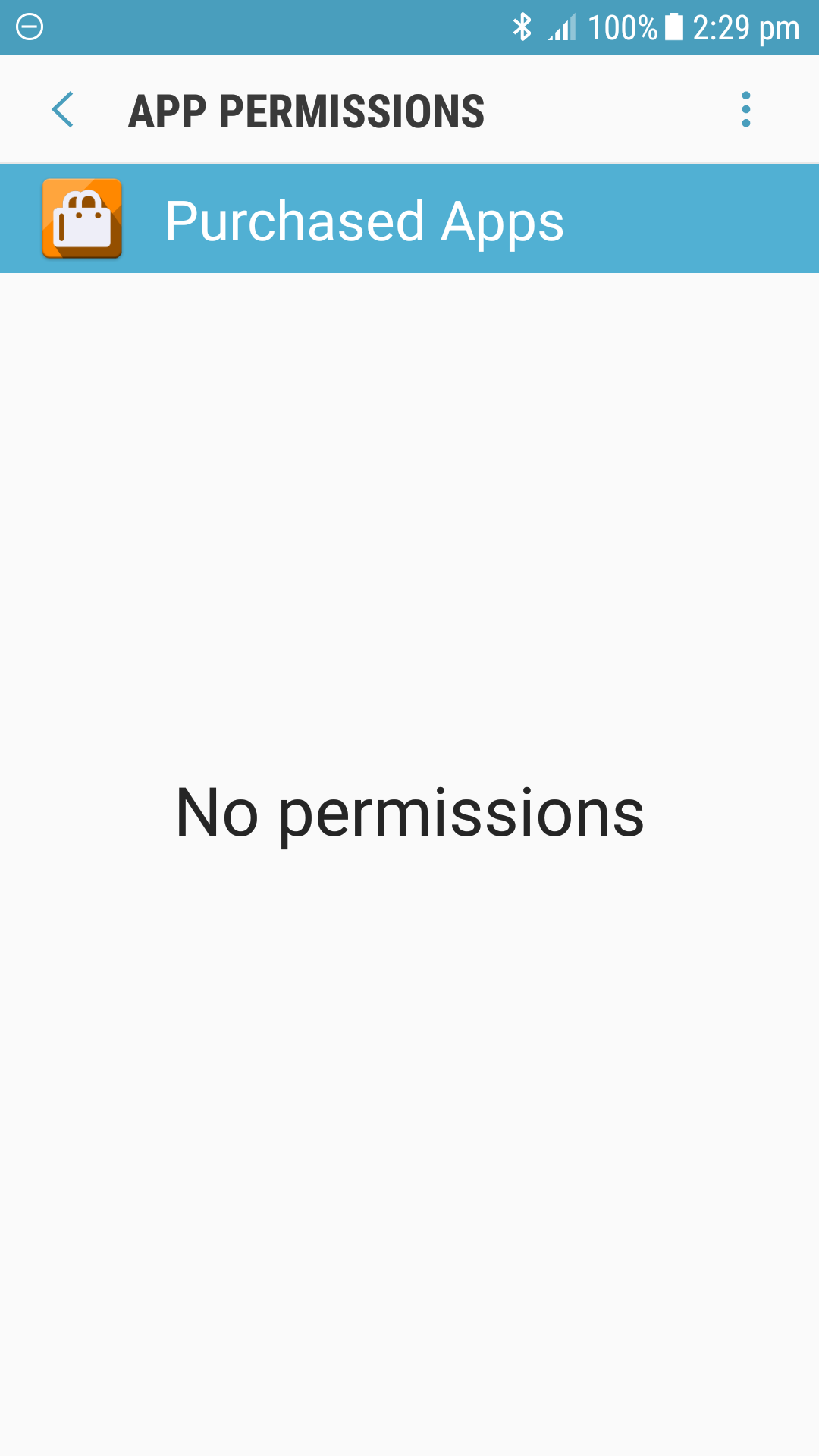 The other app you refer to that does the same thing is more upfront about what is being accessed.

SECURITY/PRIVACY NOTICE
The first time you run this app, it will ask for full permission to your Google account. This is unfortunately
the only way to access the required information. No personal
information is stored, no information about your apps is shared with
the developer of this app, nor shared with any third parties.
Everything is kept on your phone only. 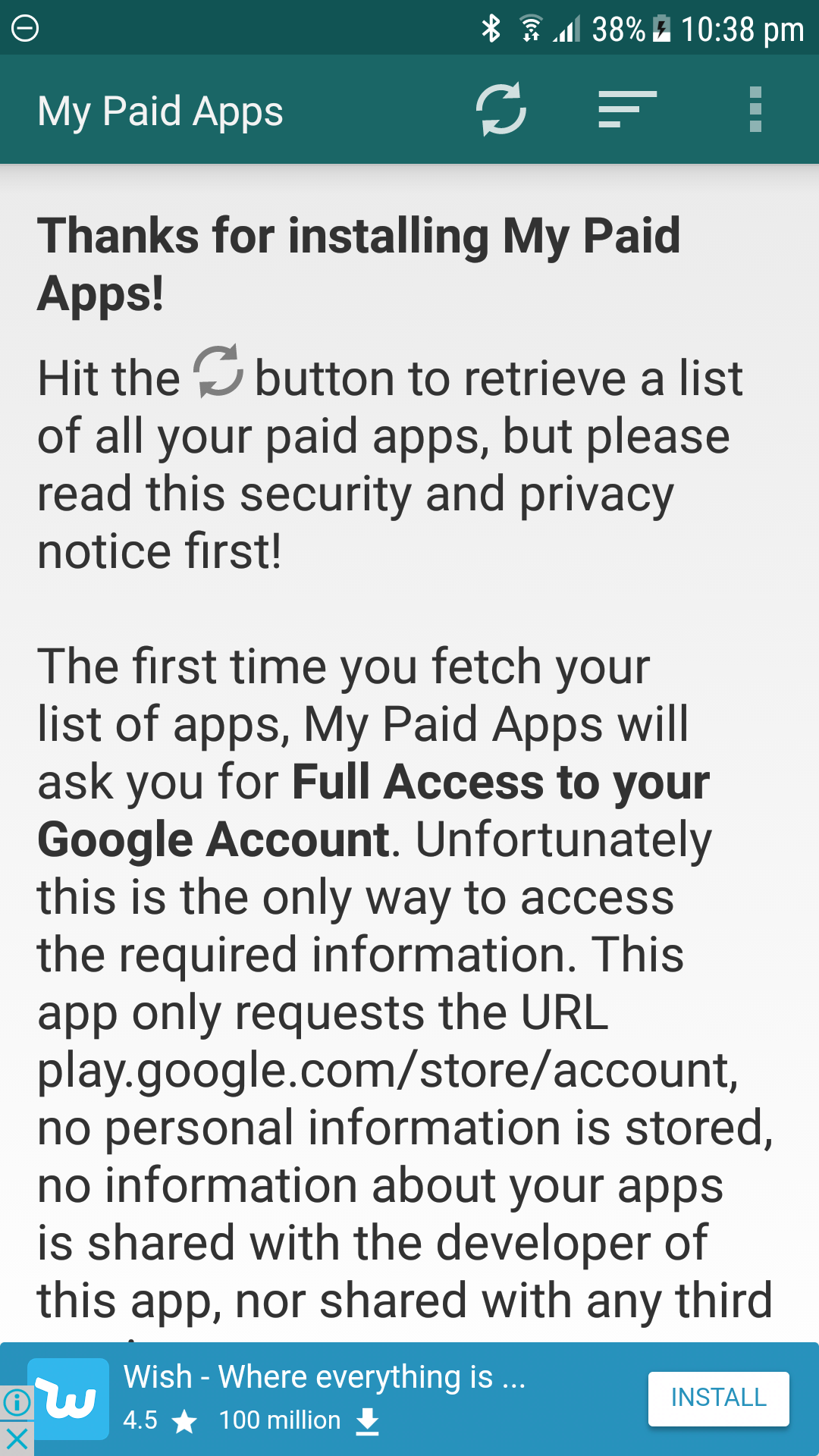 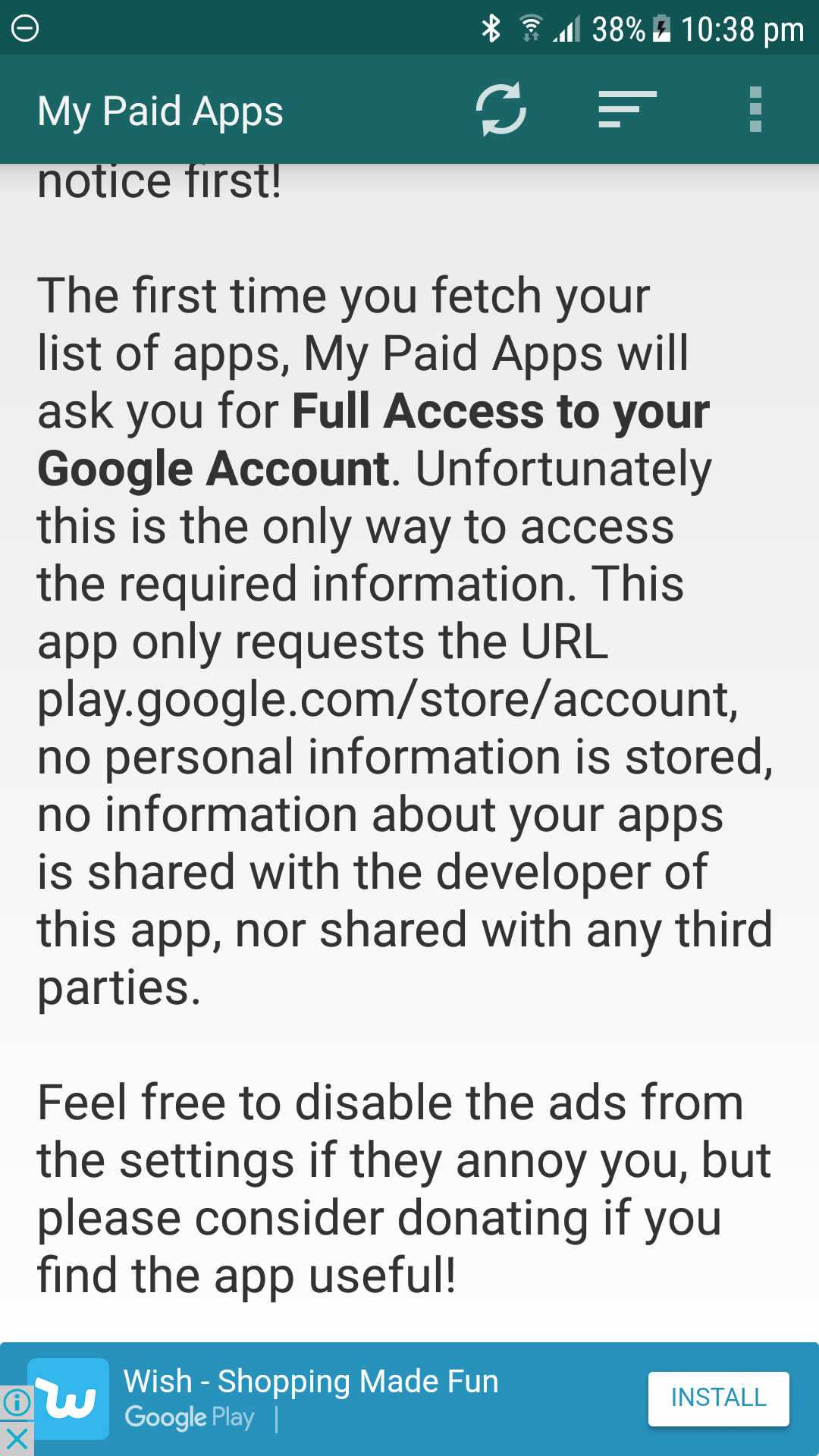 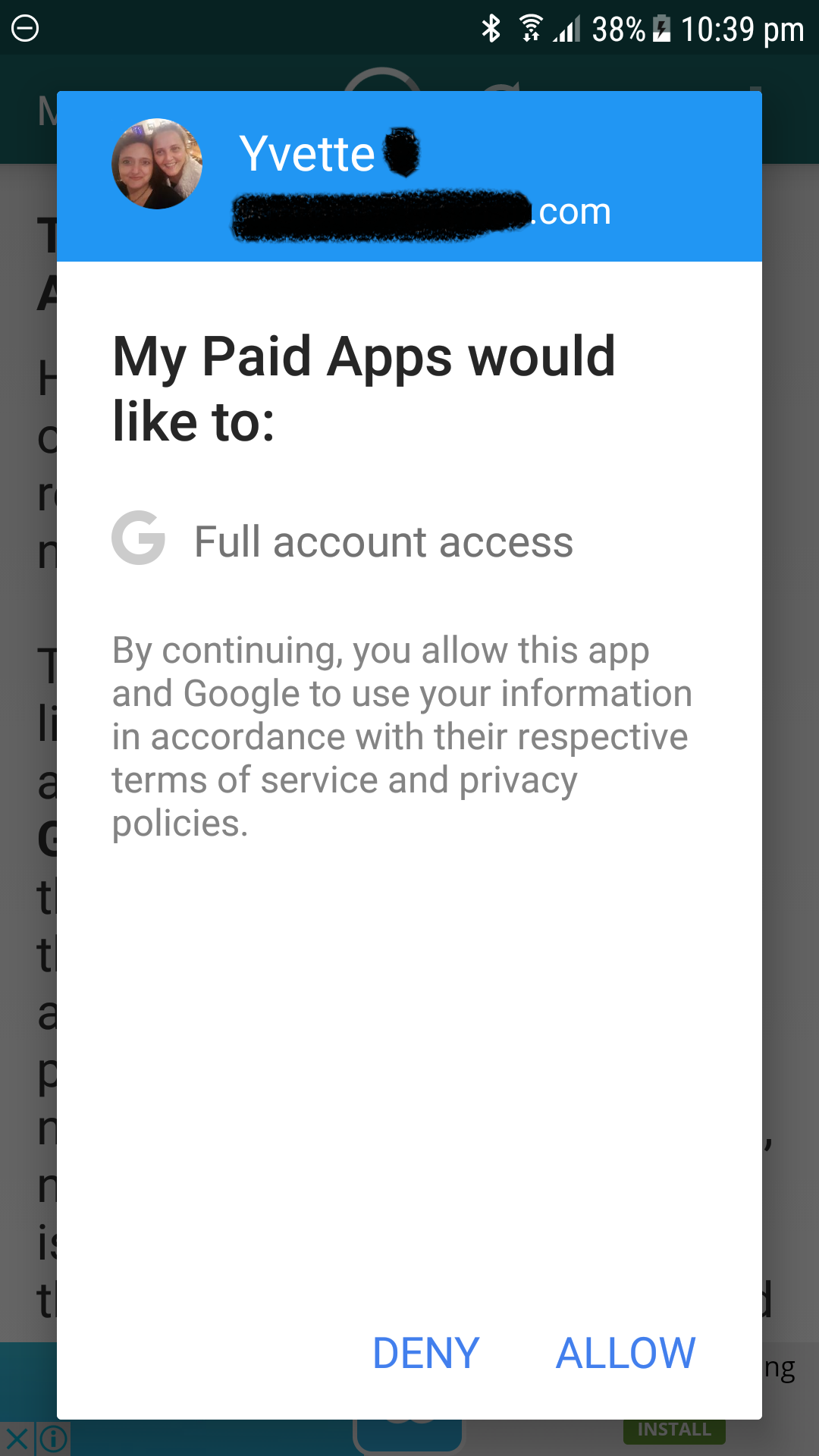 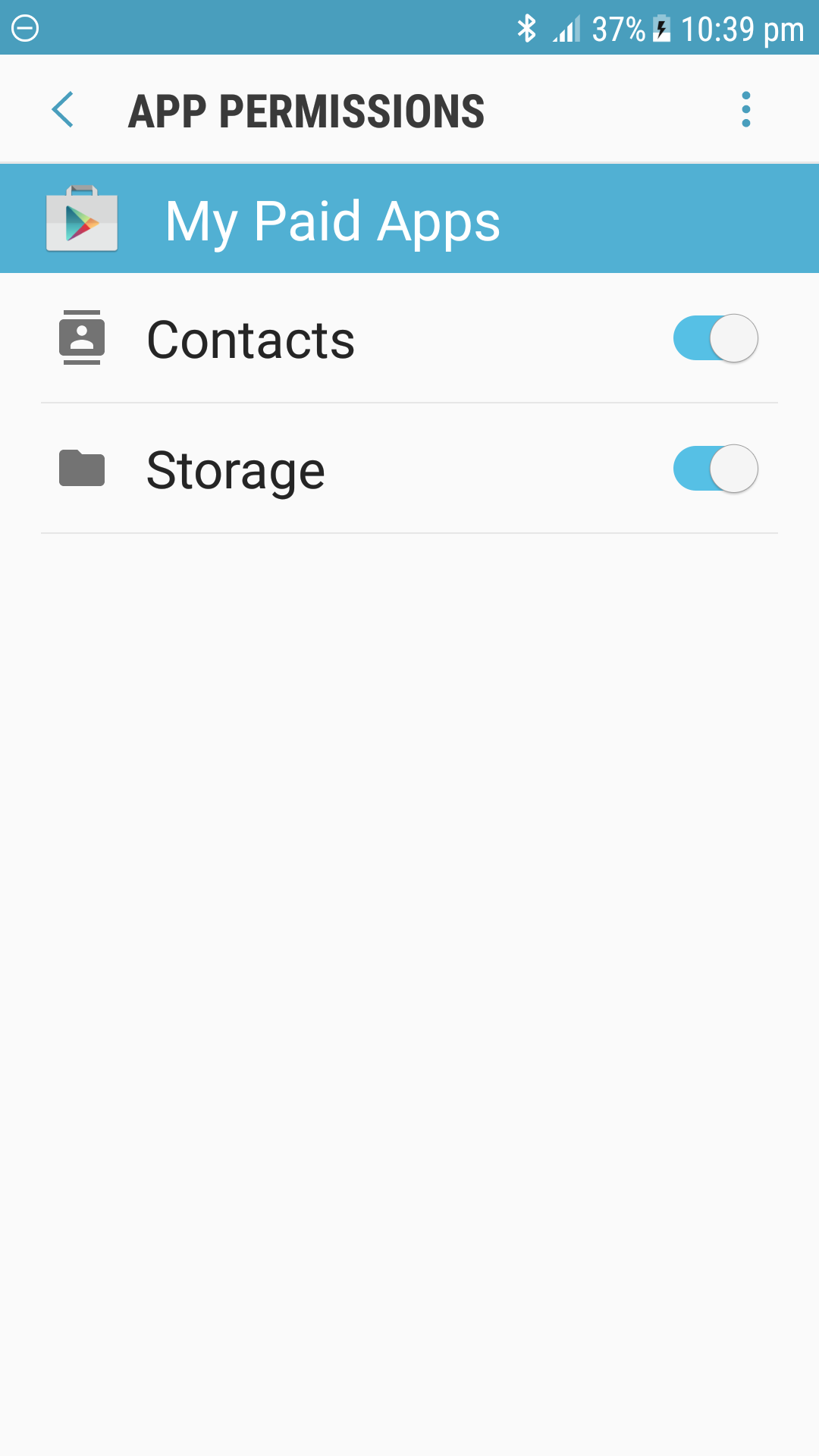 I’ve gone into detail over these apps in this blog post, which was for a university capstone project (no monetary gain). I’m inclined to think this is an exploit in the API and not status by design by Google, as there are no API calls to fetch purchases of apps other than the developer’s own app. I hypothesize it’s a zero day exploit, in which case there’s no legitimate way to access this information.

In case of one of these applications (My Paid Apps), after checking the network traffic it is pretty obvious that it does use the Store’s Account page to retrieve the list of paid applications.
Now, the mechanism it uses is the same mechanism that Google Chrome currently, and Pokemon GO supposedly at a point in time used.

In a nutshell, steps to do so are as follow:

Following is the application’s traffic as captured by ‘Packet Capture‘:

As it is clearly visible in the picture, the end result is identical to what I get when I normally open the store’s account page on my PC with Chrome Desktop:

It seems none of these endpoints are documented as they are primarily used by Google’s own programs and should be considered internal. Therefore I strongly recommend not using them in any program or code that you expect to run for a long time or in a production environment.
Also, there is bad news here for you too, it seems that the Google Play’s account page only lists paid applications or special free apps (more especially OEM apps). I will try to find some time and dig deeper into the other application.

Check ownership table, It has all information.

Dealing with unofficial Google APIs is incredibly complicated territory. It’s going to be possible to get this to work, but that’s all I’ll say. Proceed at your own risk.

The first thing you’re going to need to do is get a Google Play auth token. This can be done several ways, but here’s how they do it in Purchased Apps:

A few things to note here:

After you have an auth token, you can now access any Google Play Store endpoint. The main one used by Purchased Apps is https://android.clients.google.com/fdfe/purchaseHistory. Another one you might be interested in is https://android.clients.google.com/fdfe/details?doc=(package name) (from APKfetch code). Here’s a page with some more and some analysis. If you make a request to these APIs, you’ll need to supply several headers:

Now, you need to parse the response. Here’s where things get tricky. These APIs returns a message encoded as a Protobuf, so it’s essentially just binary data unless you have a schema (which of course, only Google has). One way to go about this in theory is to decompile the Google Play Store app and reuse their generated protobuf models with a tool like JADX.

Unfortunately, I’ve tried this and it doesn’t really work. Protobuf model classes are just too complex for a standard decompiler. What you can use is a tool called PBTK. You’ll ideally want to run this on the Google Play Store 6.1.12 APK, since that’s the last version before they started using ProGuard. Do note that this program has two errors in its script that need to be fixed before running it: changing 'extracto' to 'extractor' in gui.py and removing the assertion statement on line 500 of jar_extract.py.

Now, that should output all of the response classes as .proto files. Create a folder under src/main called proto and drag the entire generated ‘com’ directory to it. You can delete everything that’s not under com/google/android/finsky/protos. Follow instructions online to setup Gradle with the Protobuf Lite plugin.

When you want to parse a response, you can use the ResponseWrapper class, since they all appear to be contained under that.

That’s about as far as I can take you. There’s a good chance I got some part of this wrong; JADX is your best friend here, because the best way to figure out what an app is doing is by looking at its code. Hope this helps and happy developing!

you can get the package name of all installed apps on device and then get the information of every installed package that you find in the device from google play without any need to get to user account. there is some third party or unofficial apis to get google play apps details as json by getting the app package name. for example: https://42matters.com/
then use the received information for every package to find free ones.

i have two resources for you to consider, but first, in a word, no. there is no api from GOOGLE to let you do what you want, as these metrics arent stored in the phone, they are on the google play store servors, and google has no OFFICIAL api for the play store. you can however glean some info from these two sites:

and this is enough to see how to accomplish this.

first, a list of what apps have been downloaded by an account is only referencable by the account. and this can be done through the play store. since your app will be installed on that users phone, this dosnt matter… you’re in.

second, you will need a 3rd party API built for the GOOGLE PLAY STORE, there are some out there, check the first link.

using the api of your choice, you will send a get request, to the play store, and in return you should receive in most cases a json object to deserialize.

deserialize the object, and you will have your list. which list you get will depend on the endpoint you use, but that should be explained by/in the API itself.