I need to take screenshots of an android application running on an emulator in Eclipse Galileo.

Is there a built-in feature for this or do I have to download a plugin of some sorts?

You can take a screenshot if you open the Android view “devices” (under Window –> Show View –> Other… –> Android –> Devices). Click on the device or emulator you want to take a screen shot of, then click the “Screen Capture” button (it looks like a little picture, and it should be next to a stop sign button). Occasionally the device won’t immediately load the picture; sometimes you have to close/reopen the screen capture window.

This is equivalent to taking a picture via DDMS, but you can do it in Eclipse instead of opening another application. 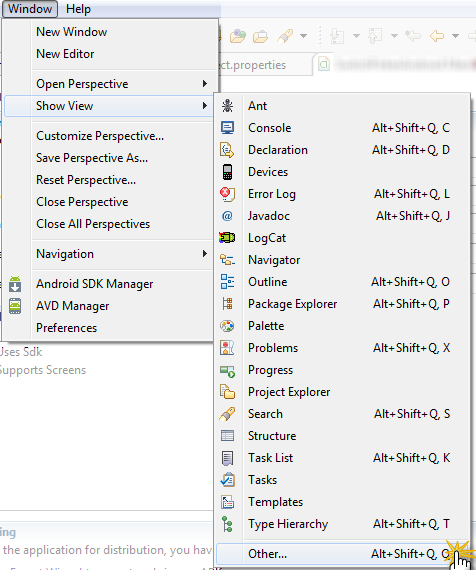 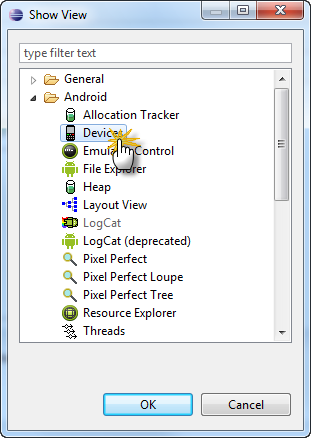 In the DDMS perspective in Eclipse there is a “Screen Capture” button. (Make sure you have your Android SDK and Eclipse plugin up to date, not sure this was always an option). Just press that button and a screenshot of whatever device you have DDMS connected to (either a real Android device or the emulator) will be created and opened in a new window where you can save it as a png.

You load the emulator with your app normally, through Eclipse, but you take the actual screenshot from DDMS, a tool that’s included in your SDK, under the “tools” folder.

In DDMS, press Ctrl+S to take a screenshot.

1-open the DDMS prescriptive,the right click on mouse.
2-there click on export screenshot.
3-then it will show you option to save your file as .png file,with whatever name you like you may save it.

I just do a control print screen, which copies the image into the clipboard, then open MS Paint then do a control Z. Then you can crop and size it to your liking. Is this ok?