The total space of my app is 10 MB, and after installation it will take less than 20 MB. In Galaxy Note I, while updating my app, it’s saying “Insufficient Storage Available”, where there is 214 MB of free space in device memory (internal). It happens even trying to download a new app.

I searched long for the solution, and a perfect reason for the cause of this problem, but I can’t find it. How do I fix this problem?

This is the result of the ‘adb shell df’ in my another device which has the same problem. It has 35 MB free space:

Here’s a very simple solution that works on my Samsung Galaxy S II and Note 1; I have no idea about other models:

I’ve restored about one GB of system space this way.

At first I tried Berislav Lopac’s answer, but I got Connection problem or invalid MMI code. when I tried to dial *#9900#. I was using CyanogenMod on the phone, and I believe phones with custom ROMs don’t use the stock dialer, so they lack the SysDump functionality.

Basically, Delete dumpstate/logcat in SysDump clears out the log files in /data/log. But you can also do this manually without SysDump. (This is assuming your phone has been rooted, which will be the case if your phone is running CyanogenMod or any other non-stock ROM.)

I deleted roughly 1,500 1 MB files like this and fixed my “Insufficient Storage Available” problem.

As with the other posters, I own a Galaxy S II, so it seems to be a problem with that model.

If anyone knows of the permanent solution to stop the log files building up, please let me know.

NOTE: Some file managers will falsely list /data/log to be empty as they are running unprivileged and hence lack the permissions to view the files inside.

The memory may be in reserve by the OS to be used for running what you normally run (kind of like a swap file). You may be able to squeeze in another app or two by

But the only very good fix might be to

Take a look at forum post It was bound to happen: low memory warning!.

The important part is:

The OS knows how much memory it needs to run the apps you already have. This is a perfect example.

Now you may be able to “fool” the OS by force closing some apps that
are sitting in RAM. This will increase your “bucket” of memory which
may let you install an app, but remember if you do these types of
things you will only cause issues down the road.. lagg, error
messages, etc. (because you are fooling the OS in thinking you have
given it additional memory which in fact you did.. you only force
closed).

Another good explanation of what is happening is in forum post Low Internal Memory.

The important part is:

The reason why your internal space is filling up is 3-fold. First,
when an app is “moved” to the SD card, it isn’t completely moved. Only
portions of it actually go. Second, the Dalvik cache of the app is
still stored on the internal memory (which takes up a substantial
amount of space). Three, the data for apps and all your system
settings are stored in the internal memory (yes, some apps use the
SD card for portions of their data, but every app has data stored on
the internal memory).

And the thread includes suggestions on what partitioning you can do to your SD card to allow ‘moar apps’!

The package manager (“installer”) has a design problem: it can’t distinguish between a bunch of possible errors and regularly comes up with the “insufficient storage” excuse.

The first steps are done: identify it’s an install problem (1.) and not related to storage shortage (2.)

In reality, the /data partition needs a cleanup from residues from previous installs.

The installer chokes on those, returning with the wrong reason. – The interesting part is: if the package gets installed on the SD card (forced or by other means) some (all?) leftovers on /data don’t hurt… which leads to the false belief that it is indeed a space problem (more space on the SD card…)!

The Stack Overflow question where I got half of this from is Solution to INSTALL_FAILED_INSUFFICIENT_STORAGE error on Android.

The first thing to do is to check the details of the error message. For this you could use the LogCat App.

The solution was to activate the common sense function in my brain and look for the com.xyz folder in the app-lib folder with ES-Explorer. I recognized that this folder was already there. So removing it solved the renaming problem and the apps can now install properly.

The same problem was coming for my phone and this resolved the problem: 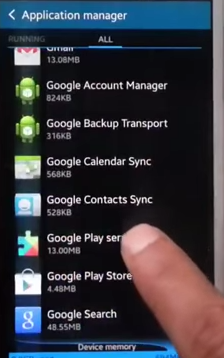 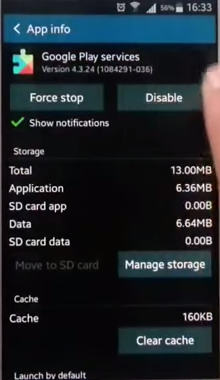 You will see lots of free space available now.

I also had this issue while installating an app after I had uninstalled that. I resolved downloading Lucky Patcher and then click on menu – troubleshooting – remove fixes and backups (insufficient storage available). Please notice you need your device to be rooted.

I have an un-rooted Nexus 4 (which has only internal storage, no SD card) and was getting this error with larger apps updating. Smaller apps would update fine.

I discovered that it was because I have recently signed up to the Play Music All Access service and had pinned several albums.

I unpinned a couple of albums and now have no problems installing apps.

1. Restart the phone and then re-install the application!

I was also getting the same problem Insufficient Storage Available on my device, but I restarted my device, and it worked fine!

For this, set Storage Location with the following command

I had this problem even with plenty of internal memory and SD memory. This solution is only for apps that won’t update, or have previously been installed on the phone and won’t install.

It appears that in some cases there are directories left over from a previous install and the new app cannot remove or overwrite these.

The first thing to do is try uninstalling the app first and try again. In my case this worked for a couple of apps.

For the next step you need root access on your phone:

With a file manager go to /data/app-lib and find the directory (or directories) associated with the app. For example for kindle it is com.amazon.kindle. Delete these. Also go to /data/data and do the same.

Then goto play store and re-install the app. This worked for all apps in my case.

I had the same problem, and it was solved by using App Cache Cleaner.

I tried several of the suggested solutions, but none of them worked for me. After some research I stumbled upon a hint to move some apps from /data/app to /system/app. That freed up enough space to install new apps and update existing ones.

I can recommend the free utility SystemCleanup for moving the apps.

This is the easiest thing to do. Go to settings
look for storage or memory touch it and look for cached data. touch it
and clear your data from there. SIMPLE!!!

Does the app necessarily have to be installed in internal storage? If you are not running any service, you could try installing it on the external storage. This can be done by adding the following code in your manifest:

When it comes to areal device, the behavior of devices seem different to a different group of devices.

Some of the strange collection of the opinion I heard form different people is:

I hope one of them is relevant to you! 😉

Most of the space you have available is reserved by the OS. The best and easy fix is to move your apps to external storage. This will free up a lot of space for you.

I resolved this issue for myself. Though, the internal and SD memory was showing a lot of free space. It was an issue with phone memory, which was almost full.

Here are the ones which are not checked and that are occupying the space on the phone memory.

Once you free up a considerable amount of space on the phone memory this way, the error should not come.

I think OS calculates the total memory required to run all apps. If it doesn’t fit then it says “in sufficient memory”.

Then I freed up some space on /data, 600 MB free, and now it’s working fine, apps download and install ;). So it seems like this ROM needs a little more free space to work OK…

Clearing the Google Play cache memory will also help you… Go to the app information page of Google Play and clear it.

I did not find a free solution that worked, but I found a solution: I used the non-free version of Titanium backup, clicked on the context button and chose to check the memory occupied by apps. Find the download app, and you will see that it has a certain amount of space allocated to its cache. Clear data is the option that you want.

I got the same error message in case the package name was too long (>128 chars). Just using a shorter name fixed the issue.

I had more than 2 GB internal space and yet I was not able to install / update applications either from Google Play or manually.

Whatever may be the reason, wiping the cache partition solved my purpose.

If you have root, delete all of the folders on the path:

And then restart your device.

I had this issue many times, and this fix worked for me each time. It even has an XDA thread.

I write all folders, because if there is a problem with one app, there is a good chance you have this issue with other apps too. Plus, it’s annoying to find just the folders of the problematic app/s .

Go to Settings, Apps, All and uninstall Google Play Store.
This will replace by the old version and then you can download without the “Insufficient Storage ERROR”
It works for me

I kept having this problem, and I cleaned up the Dalvik cache using Titanium Backup. You’ll need to have your phone rooted. As soon as I did that I was able to update Swiftkey and Beautiful Widgets.

Previous article
android – How do I specify different layouts for portrait and landscape orientations?
Next article
shell – How to empty (clear) the logcat buffer in Android