I have a rather big Android App project that is referencing several library projects. Everything was fine until i upgraded the eclipse ADT plugin to the newest version (v22). I also upgraded the SDK of course. I do not see any compile errors in eclipse, but when i run the project on the phone i get a NoClassDefFoundError.

The arca library is included in one of the referenced library project (in the libs folder) and i can see it in the “Android Private Libraries” in the package explorer, also as i said, no compile errors. The project runs fine on everyone else’s computer that did not upgrade ADT.

I have already tried a whole bunch of stuff including but not limited to:

all without any success, so i’m getting really desperate here.

I would be really happy if anyone could give me a hint on how to solve that problem.

To fix this, go to ‘Order and Export’ and check ‘Android Private
Libraries’. Then refresh/clean/rebuild.

After you done this ‘fix’ for a library project, you may need to just close
and re-open any depending project, because they may not see this ‘fix’
immediately.

Give this a shot and with luck it will solve your problem. 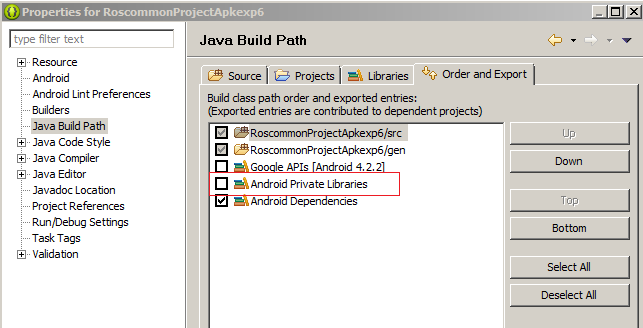 Simply checking Android Private Libraries was not enough, I also had to install Android SDK Build-tools in Android SDK Manager.

I have encountered a similar problem, spent about 3 hours, but none of the proposed here decisions did not help… Finally I found a source of the problem: my project files & project.properties were read-only. Eclipse is simply silently ignoring any changes in library dependencies when I doing it in the GUI!

I had the same problem. It was because of the eclipse project.
To solve it I created a new project in eclipse, copy my existing project classes and resources into it and then launched eclipse again and added my custom includes.

I had the similar issue and my answer is slightly different from CommonsWare’s. Here is my screenshot: 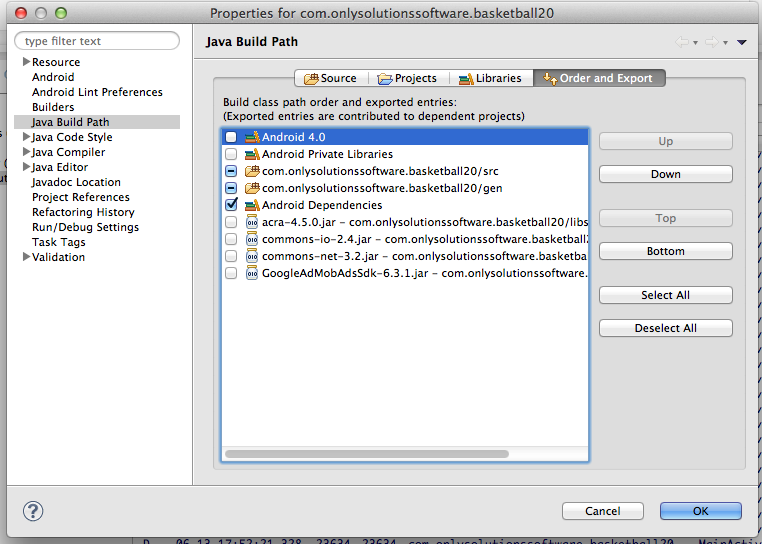 After checking the libs back in my build started to work again.

I had also the same problem, 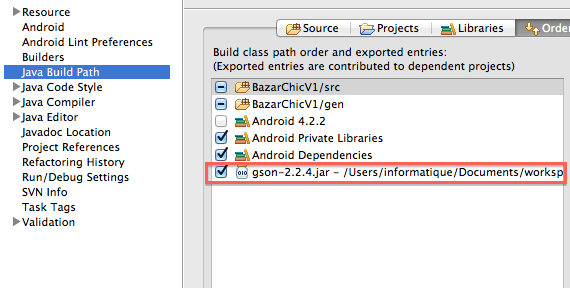