A set of six generalized densities:

From the wiki pages of each phone display

Scaling down into the buckets i.e if the ppi is 300 that would go into the hdpi bucket as it less then 320?

Is this the correct way to work out buckets for screen sizes.

The reason I asked is because I have created the following value directory resources:

In the dimens.xml I have different margins and set the dp depending on the bucket size i.e.

I am interested to know if this is the correct way to do this.

The reason I asked is because I have created the following value directory resources. (…)
In the dimens.xml I have different margins and set the dp depending on the bucket size. (…)
I am interested to know if this is the correct way to do this.

I’m not sure why you want different margins specified in dp depending on the density. Specifying the margin as dp once, for the baseline density, already handles all other densities for you, meaning that the physical size of the margin will be the same when displayed on any device.

If you used px instead of dp (but don’t), then you would have to do the scaling for different screens yourself.

Scaling down into the buckets i.e if the ppi is 300 that would go into the hdpi bucket as it less then 320?

Relevant part of the documentation is this:

Each generalized size and density spans a range of actual screen sizes and densities. For example, two devices that both report a screen size of normal might have actual screen sizes and aspect ratios that are slightly different when measured by hand. Similarly, two devices that report a screen density of hdpi might have real pixel densities that are slightly different. Android makes these differences abstract to applications, so you can provide UI designed for the generalized sizes and densities and let the system handle any final adjustments as necessary.

So again, you shouldn’t really care how Android does this if you are just writing an app. What you should care about is:

Android will lookup the best matching resource, and then transparently handle any scaling of the dp units, as necessary, based on the actual density of the screen in use. The conversion of dp units to screen pixels is simple: px = dp * (dpi / 160).

Note the actual density as opposed to generalized density. The latter is only a convenience for the developers, since it would be impossible to provide drawables for every screen out there. This way developers need to provide only 3 or 4 sets of graphics, while Android picks the closest fit and adjusts it further for the needs of that particular device. (Nowadays it’s possible to use one vector drawable instead of many pre-scaled raster graphics, meaning better quality and less size.)

Is this the correct way to work out buckets for screen sizes.

No, it is not. According to Google device metrics all devices you listed fall into buckets higher than you expected:

I took some other devices from that list, and plotted how different devices are falling into density buckets depending on their actual physical density. 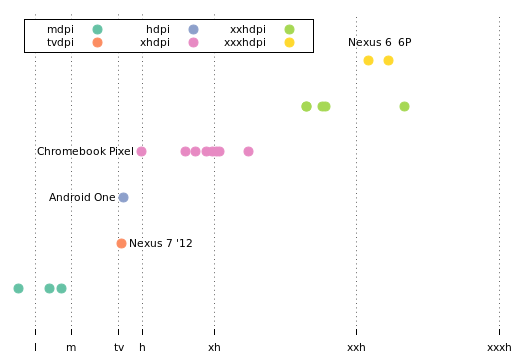 You can see, that with some notable exceptions, the rule that the closest generalized density is selected, holds.

The exceptions being Nexus 6 and 6P, that are listed as xxxhdpi, even though LG G3 has a higher physical density and still is far from 640px/in. Android One is hdpi but it is only slightly denser than Nexus 7 ’12 which is tvdpi. Chromebox 30 and Chromebook Pixel (admittedly, not Android) are assigned to buckets mdpi and xhdpi even though they are physically lower than ldpi and hdpi, respectively.

I am interested to know if this is the correct way to do this.

You are mostly correct.

The problem lies in this part:

The reason I asked is because I have created the following value directory resources:

In the dimens.xml I have different margins and set the dp depending on the bucket size i.e.

The correct way to think about this is to realize that the only resource that is affected by varying screen densities is drawable. A drawable on a screen with dpi = 240 will look twice as big compared to a screen with density = 480. I am sure that you’re providing folders like drawable-hdpi, drawable-xhdpi etc. to deal with this. For everything else, and especially dimensions, use dp. For text sizes, use scaled-pixels - sp.

More importantly, you should worry about the range of different screen sizes that are available for android. How would you use all the extra screen real-estate on a 10 inch device compared to a 5 inch phone? Qualifiers such as -normal, -large, xlarge should be of more interest to you.

I know that its a bit of a steep slope here :). So, if you need to clarify some more, leave me a comment.

From the Android documentation:

To fix this issue, the gesture threshold must be expressed in code in
dp and then converted to actual pixels. For example:

PPI (Pixels Per Inch) and DPI (Dots Per Inch) mean the same thing since they are a measure of the density of the screen; thus, your approach about PPI vs DPI is correct.

A detailed explanation can be found here. The key part of the article is the following:

The screen density is quoted as Pixels Per Inch, PPI, and is the
number of pixels that fit into an inch. The higher the number then the
sharper images look on the display, therefore consumers consider a
high PPI figure an advantage when buying a device. Sometimes the
figure is quoted as Dots Per Inch, DPI …

Bit late, but this may be useful to other readers. Screen density and the “bucket” Android uses to pick a resource from can be confusing. Google’s documentation is pretty dense, and it takes alot of work to distill it down to something useful when writing code. Partly because there are several factors and they’re telling you everything about screen density and dips. But the short answer is this.

Basically, dpi is your defining factor, (if you rely on other factors like small/medium/large), this is not your answer. Otherwise, I found this answer quite helpful and simple. Here is some code I have collated from various sources that I run on app startup to determine display information.

The screen density tells me what dpi level the device supports.

Next I have a simple device metrics method to tell me about the screen. (Note, I am using Timber logger).

I also have this simple helper method that determines the DPI name to support the method above.

Finally this video from 2013 is still relevant today.

Previous article
delphi – The application called an interface that was marshalled for a different thread
Next article
eclipse – How to close a project in Android Studio?