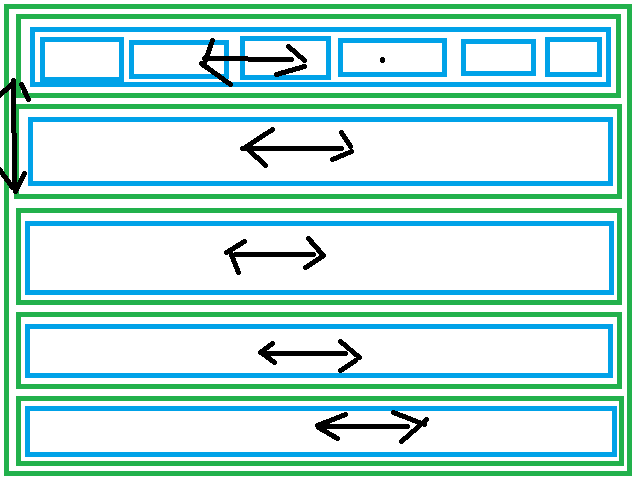 So, I had tried to scroll to the scrolled position before it was displayed. Just like this:

Note: this is in adapter of the parent recyclerview whose orientation is vertical.

Note: I have also test scrollToPosition(), it doesn’t get any problem like this. But I can’t use it at my case. Because users can scroll to the any x position which may not the exact position. So I need to set scroll position using x value instead of the position.

Edit: You can check The source code

I found a solution that is use scrollToPositionWithOffset method instead using scrollBy. Even if both of two scroll another position, they have really different work process in back side.

For example: if you try to use scrollBy to scroll any pixel position and your recyclerView had not been set any adapter which means there is no any data to display and so it has no any items yet, then scrollBy doesn’t work. RecyclerView uses its layoutManager’s scrollBy method. So in my case, I am using LinearLayoutManager to the horizontal recyclerViews.

As you can see scrollBy ignores the scroll intentions if there is no any child at that time.

On the other hand scrollToPosition can work perfectly even if there is no any set data yet.

According to the Pro RecyclerView slide, the below sample works perfectly. However you can not do that with scrollBy.

As a result, I have changed little thing to use scrollToPositionWithOffset().

Before this implementation I was calculating the exact scroll x position as a pixel.

After that, when the scroll came idle state, calculating the first complete visible position to the first parameter of the scrollToPositionWithOffset().

For second parameter which is the offset, I am getting the value using view.getLeft() function which helps to get left position of this view relative to its parent.

And it works perfectly!!

Previous article
How to do Excel's "Convert to Number" in Java
Next article
MS Excel: Count frequency of similar values in between blank cells