After the Android Studio 2.0 update while the gradle build finishes I get this :

It prevents the app from starting but it’s installed in my emulator.
This is what comes up in the Run tab :

Here is the code:

This is the logcat i am getting

Thanks anyone who is willing to help

I also faced this issue after I updated to AS2.0. I found that it is because of the instant run enabled. So my solution is to disable the “instant run”. and it worked. To disable “instant run”, you can go to Preference Dialog ( May be Setting dialog on Windows), then select Build, Execution, Deployment > Instant Run, and uncheck all the checkbox to disable Instant Run.

This is my temporary solution and it may help you. Later, I’ll find a better way to this issue.

If you are using Android 7.0 and above it is likely that the app was installed in two places (Guest and Admin) and you only Uninstalled it for only one user and that is causing problems.

To solve that, go to:
Settings -> Apps & Notifications -> See all Apps -> find the app you are trying to install. 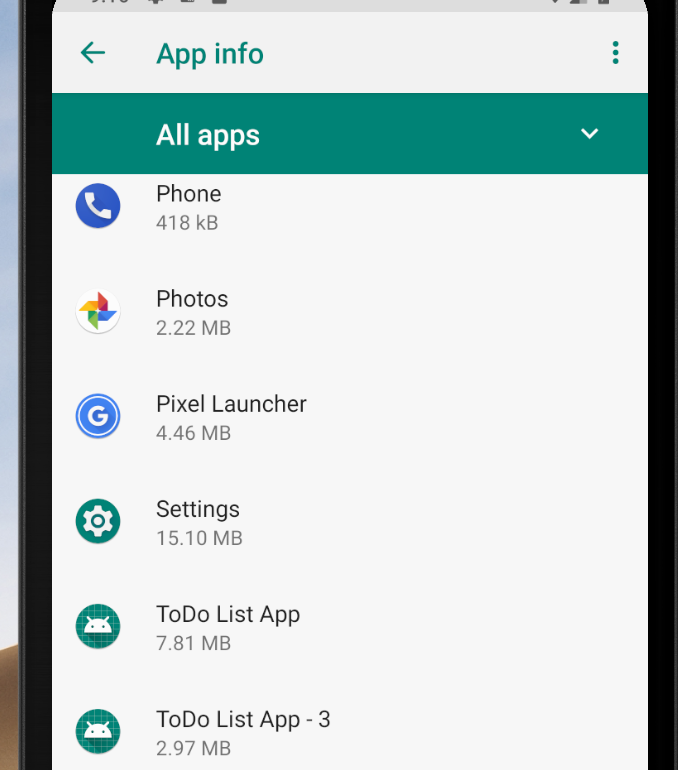 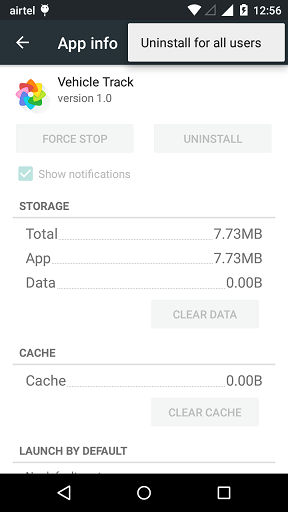 Run Your App from Android Studio it should work.

Try reinstalling the app, this solved the error for me. The trick was that, I uninstalled my app, but Android didn’t truly uninstall it. On my phone, there is a guest user (my sister uses it sometimes). If you uninstall the app from your main user, it will still be available on the phone, but only for the guest user. It looks like Android Studio can’t handle this case. I guess it detects that the app is installed, so it will not be reinstalled again for the current user, hence the OS can’t access and launch the activity. Nice bug, I’ll report it.

I’ve had same issue, rebuilding project clears the error for me.

This is issue with 2.0+ studio 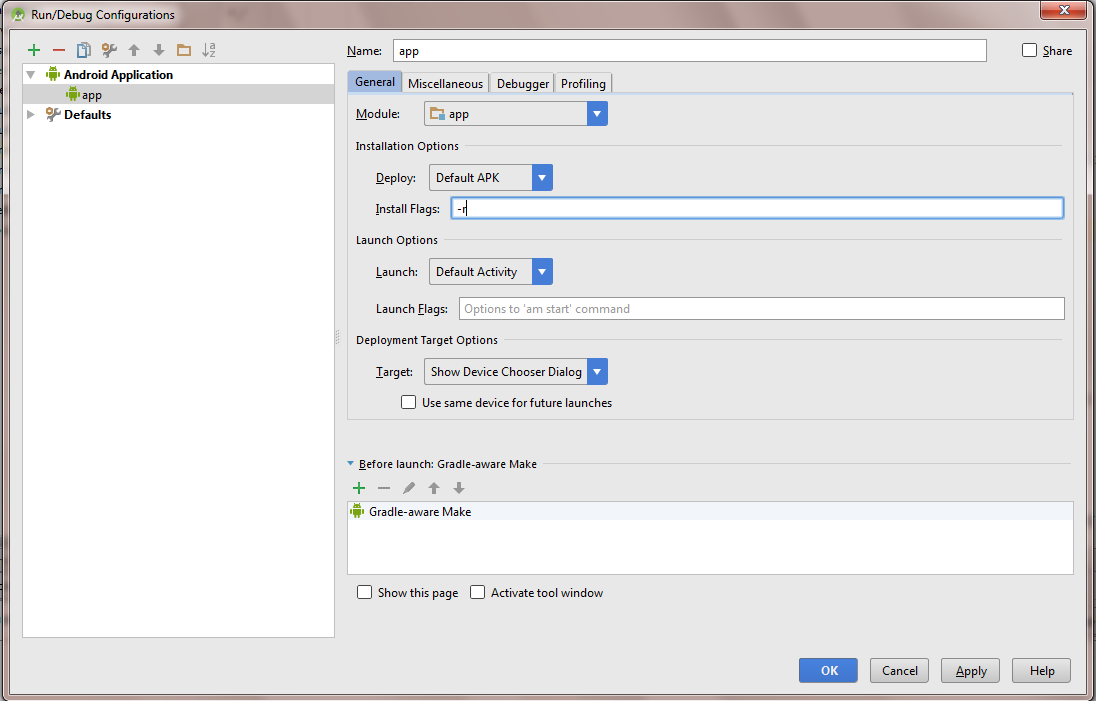 For me the problem was that the app I was trying to launch was already installed under a different user account on my phone. I saw this when I went to Settings->apps looking to uninstall it. I switched to the other user, uninstalled it, came back to the original user, and was able to install and launch the app from Android Studio with no more problems.

I spent a whole lot of hours on this exact issue. The “instant run” fix was a total fail. And I wasn’t missing the android.intent.category.LAUNCHER I removed all applicable Android Studio and SDK code and re-installed. Still a no go.

Ultimately I think my issue was marginal hardware. I’m running on a laptop with a AMD A6-4400M processor. There is no hardware acceleration / virtualization tools available. I was just running the standard Android Studio / Google emulator. It was painfully slow, and although I was eventually able to see the emulator and interact with it, I was never able to connect the emulator to Android Studio to upload APK’s.

But I did discover an awesome fix.

Answer provided here in case anybody else gets stuck with this error, possibly with this root cause.

I got the same problem and fixed it with this answer.

But this problem was created by myself, as I tried to debug my unit tests. Therefore I had to uncheck the Use in-process build option of the AS Settings in Build, Execution, Deployment > Compiler.

Same issue, but for me problem was that Android Studio couldn’t find my Default Activity. When I specified the intent filter to catch the MAIN action intent, I didn’t specify the LAUNCHER category, and that caused the ‘Error Launching activity’ issue.

Just Run --> clean and rerun , In my case it helps.
Prompts automatically like following message

would you uninstall already installed activity with same name

if activity is already installed first uninstall it and make project ready after installing app.

I was facing the same problem in android studio 2.1.2 but worked after selecting Build -> Clean Project or alternatively Run -> Clean and Rerun

I tried all suggested answers. I found out this is a hardware issue on Android N phone with studio 2.3 version. App launches fine on phones below version 7.

I’ve fixed the issue using this solution.If you are running the application in USB device then close all the virtual device like : genymotion / virtual machine .

OK already so many possible solutions for this problem, if none of those works then try this.

I faced this problem when I first uninstalled my app then tried reinstalling from ADB. But then after trying these many solutions, I realized that uninstalling app nowadays does not really uninstall it. It just disables it for few days so that it can be enabled in case you change your mind.

Now I am not sure whether its done by LG or Native Android Nougat.

I just went in Settings-> apps-> my-app and uninstalled it completely. After that from Android studio I am able to install the app again properly without this error.

I tried the above answer. However, none of the solutiond worked for me. I changed the emulator to USB and the code is running on the USB target device prefectly!

All answers did not work for me.This error raised when I was trying to rename the app package.I have ended up creating a new project with the new package name and move my files to the new one.

it occured when I changed the applicationId in app gradle file.
It works for me after I sync gradle.

Uninstall App on your real device or emulator. Then Run again.
It’s worked for me.
I used Android Studio 2.3.3

I have 3 user acounts in my phone. So, I didn’t select Uninstall for all users, and it only uninstall my app from first user account, but it was still there in guest and second user account.

So, I removed it from rest of the accounts and it solved my issue!!

I had same problem. I was using AVD with arm processor image and received this same message. The only way for me to make Android Studio 2.1.2 runs the app with instant run was change to an X86 processor image. The error was gone and ( until this moment) I think the emulator works faster than ARM emulated. My workstation configuration is Intel I5, 6Gb RAM. Maybe this helps until next fix.

Disable “instant run”, you can go to Preference Dialog ( May be Setting dialog on Windows), then select Build, Execution, Deployment > Instant Run, and uncheck all the checkbox to disable Instant Run.

And Reboot your Device this should make the thing work….instant run has a bug in Android studio 2+
This should do the magic

I got the same error.
This issue was caused by uninstalling the app from the device (uninstalled from only 1 user)

Solved by logging into the other user and uninstall the app from there.

I did all suggestions above, but they didn’t work!
I rebuilt the project, uninstalled the app from my real device, unplugged USB, then I run Android Studio and run the app on my real device and the issue was gone.

I had the same error as in the headline.
after I changed the version name and version code in the gradle,
the sync happened and then it worked.
so maybe even only sync can help sometimes.

Sometimes when you uninstall the application from android device it does not get uninstalled completely. It goes to disabled state. To fix this, Go to Settings -> Apps -> Disabled Apps -> Select your app and uninstall.

Then go to android studio and run the app. The isssue is resolved.