I’m using Android Studio 0.2.3 and when opened an activity layout normally, the preview should appear on the right side, so that I can switch between Text and Design mode, which should again show the preview of the layout.

But no preview is shown not on the right side neither when I’m in text mode nor in the design mode. I just get the error rendering problems...

When I compile everything and install the app on my device, it works without any errors. For developing and experimenting with the layout, it would still be nice if I could get the preview to work.

I have also tried to switch between different devices in the studio, but no success.

Does anyone know how solve this? 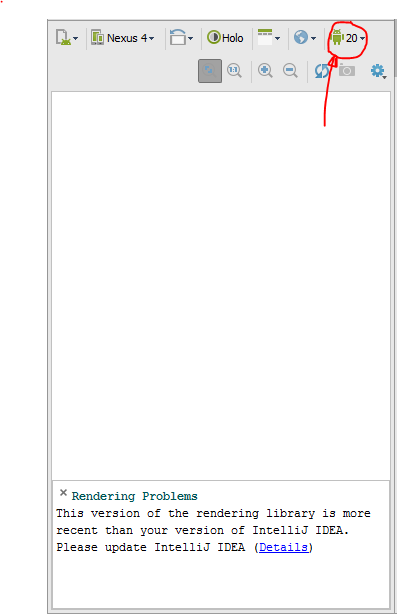 Adjust with your current API Level. If the API level isn’t in the list, you’ll need to install it via the SDK Manager.

I fixed it – in styles.xml file I changed

It’s some kind of hack I came across a long time ago to solve similar rendering problems in previous Android Studio versions.

This is under the Android icon menu in the top right of the design window.

This was a solution from http://www.hankcs.com/program/mobiledev/idea-this-version-of-the-rendering-library-is-more-recent-than-your-version-of-intellij-idea-please-update-intellij-idea.html.This required a Google translation into English since it was in another language.

In the Latest Android Studio 3.1.3, Dependency:

This will solve your problem of Preview.

Still, in beta01 there is a preview problem for latest appcompact v7 library
make the above change as changing it to alpha01 for solving rendering problem

I have solved the Problem by changing style.xml

this was an awesom solution.

it still happens in Android Studio 1.5.1. on Ubuntu and you can solve it simply changing a setting from Gradle:

1) on app/build.gradle dependencies change from:

I had the same problem, current update, but rendering failed because I need to update.

Try changing the update version you are on. The default is Stable, but there are 3 more options, Canary being the newest and potentially least stable. I chose to check for updates from the Dev Channel, which is a little more stable than Canary build. It fixed the problem and seems to work fine.

To change the version, Check for Updates, then click the Updates link on the popup that says you already have the latest version.

In build.gradle below dependencies add:

This worked for me, I found it on stack, addressed as the “Theme Error solution”:
Theme Error – how to fix?

Rendering didn’t work for me too. I had <null> value on the right side of the android icon. I ran

I restarted Android studio then and <null> value changed to 23.

Just download minimum prefered SDK from SDK Manager, then build. Works for me.

I hope this helped

All you had to do is go to styles.xml file and replace your parent theme from