I’m using React.JS and when I do react-native run-android (with my device plugged in) I see a blank page. When I shake the device and select Debug JS Remotely from the option list I see the following screen. 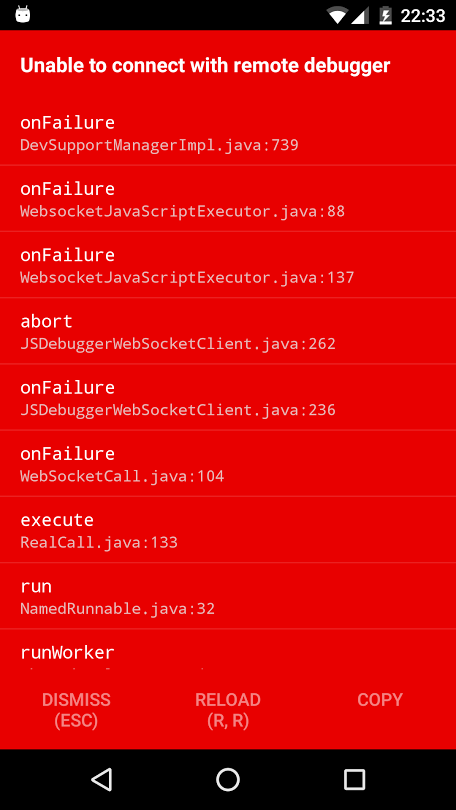 In my case the issue was that the emulator was making a request to:

http://localhost:8081/debugger-ui and the request was failing.

To solve the issue: Before enabling remote debugging on your emulator, open http://localhost:8081/debugger-ui in chrome. Then enable remote debugging and go back to the chrome page where you should see your console logs.

In my case, selecting Debug JS Remotely launched Chrome, but did not connect with the android device. Normally, the new Chrome tab/window would have the debugging URL pre-populated in the address bar, but in this case the address bar was blank. After the timeout period, the “Unable to connect with remote debugger” error message was displayed. I fixed this with the following procedure:

That should fix the problem. If not, you may need to take the following additional steps:

I had a similar issue that led me to this question. In my browser debugger I was getting this error message:

Access to fetch at ‘http://localhost:8081/index.delta?platform=android&dev=true&minify=false‘ from origin ‘http://127.0.0.1:8081‘ has been blocked by CORS policy: No ‘Access-Control-Allow-Origin’ header is present on the requested resource. If an opaque response serves your needs, set the request’s mode to ‘no-cors’ to fetch the resource with CORS disabled.

To fix it, I simply had to change Chrome from:

Make sure that the node server to provide the bundle is running in the background. To run start the server use npm start or react-native start and keep the tab open during development

My case is that when I tap enable remote JS debugging, it will launch chrome, but can not connect to it.

I have tried to run:

I uninstalled my chrome totally and install a new one. And it works.

So you can run:

The other answers here were missing one crucial step for me. In AndroidManifest.xml I needed to add usesCleartextTraffic:

You probably don’t want to keep this in the production release of your app though, unless you want to support insecure http requests.

After I added this to my AndroidManifest.xml, then I followed Tom Aranda’s answer, and the emulator was finally able to connect to the debugger.

I did @sajib s answer and used this script to redirect ports:

Inculding all impressive answers the expert developers specially Ribamar Santos provided, if you didn’t get it working, you must check something more tricky!

Something like Airplane mode of your (emulated) phone! Or your network status of Emulator (Data status and Voice status on Cellular tab of Emulator configuration) that might be manipulated to don’t express network! for some emulation needs!

I’ve overcome to this problem by this trick! It was a bit breathtaking debug to find this hole!