Since updating to ADT 14 I can no longer build my project. It was building fine prior to updating.

I had the same problem, quite weird because it was happening only when using Eclipse (but it was OK with Ant).
This is how I fixed it:

Only sometimes:
In Order and Export tab I did not have any jar library there, so I have unchecked Android Private Libraries item. Now my project is running.

My problem was resolved after cleaning up some directories and files left over from the previous versions of the tools. ADT Rev 14 changes where binaries are stored. I deleted the entire bin directory, restarted Eclipse and cleaned the build and forced a rebuild. That seemed to do the trick initially but the problem came back after the next run.

I finally discovered that my bin directory was included in the project build path. I excluded bin from the build path and repeated the steps above. This resolved my problem.

None of the above helped.
It was a simple problem in the end.

I had a project which uses the FacebookSDK and ViewPagerIndicator as library projects.
All were built on Android API 16 and those two projects used the android support library vX (X not being 16!)

I added an external JAR to both those projects and pointed it to \extras\android\v4…
And also removed the v4 jar I had in their libs folders.

Clean all projects and re-build.

This problem was happening me, I had an external .jar in my libs folder called gson-2.2.2.jar but for some reason there were two of them, gson-2.2.2.jar and gson-2.2.2.jar(1), I simply deleted the latter and my project built fine again.

As others have mentioned, this occurs when you have multiple copies of the same class in your build path – including bin/ in your classpath is one way to guarantee this problem.

Deleting the extra copy in bin/classes solved the problem – unsure why Eclipse made a copy there.

You can test for this with

This error can happen if you have two jars that contains the same class names, e.g. I had two library: jsr311-api-1.1.1.jar, and jersey-core-1.17.1.jar, both containing the class javax.ws.rs.ApplicationPath. I removed jsr311-api-1.1.1.jar and it worked fine.

Go to Project/properties and Java Build Path and unchecked the Android Private Libraries. 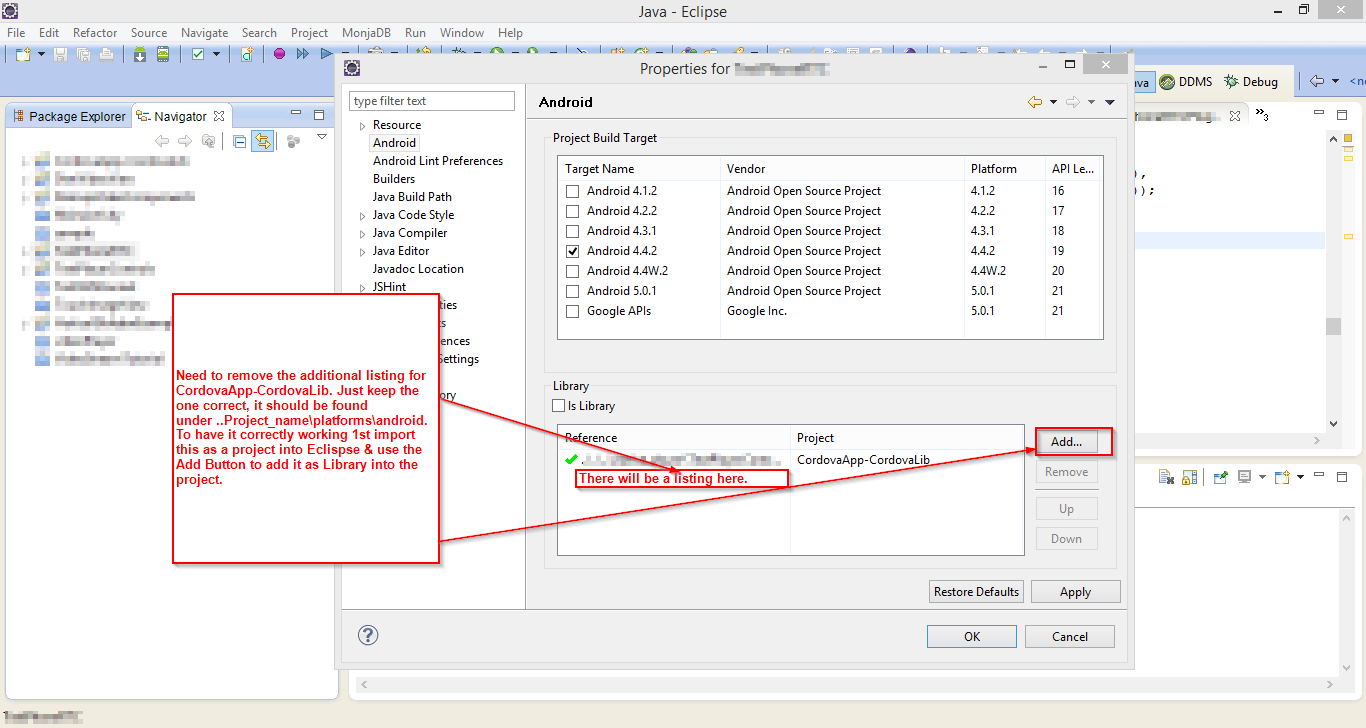 I removed Android dependencies from build path and it worked.

Edit: ignore that. I had same jar in my maven dependencies and libs folder. I removed the one at the lib folder.

You have probably installed r14, this error may have been caused due to the platform tools update, you have to re-install your sdk

For me this problem only exists as long as there are Android library projects involved in my project. So when I remove all the libraries and do as you said I can run my app again.
If there are libraries involved even the bin-removal-trick trick won’ work.

I don’t get why this bug first appeared today since I’m using ADT 14 for several days now. Well there were other bugs that kept me happy though.

Deleting the bin folder was not enough, I also deleted the gen folder. Then after two rebuilds the dex error message was gone.

I was basically facing the same issue.
I deleted the BIN folder, then removed unused jar files for Order and Import from eclipse.
IT WORKED after that

I’m late to this party, but adding my own experience so I can find it again later 🙂

I ran into this problem after upgrading the android sdk and eclipse ad-ins. No upgrade goes unpunished!

So the solution was:

It was along way to piece all that together from the other solutions! Phew!

I ran into this when I upgraded from adt 14 to 15 and to get it to work I ended up just deleting the .eclipse folder (along with my settings) and re-installing the adt 15.

After reading Terrys response about deleting the bin directory and Larrys about the the location of the ANT directory:

I moved the files located in my projects BIN directory to the BIN/CLASSES and im up and running.

Edit 1
Then failed on second run…doh

Edit 2
So closed Eclipse moved files back to original location and its all working… um what?
I don’t pretend to know why this worked. Will update if any changes.

Edit 3
I have noted from my backups that there were indeed duplicate files in the BIN directory and BIN/CLASSES.

So the answer is: don’t have files in both locations. At least for me that’s what worked.

Modify your eclipse.ini file and set the maximum memory parameter to

Then restart your computer.

It worked for me.

found a solution i believe??

Where it says : “Lcom/coremedia/iso/AbstractBoxParser$1” that just happen to be the location of the library I imported that was causing the issue. Looked for com.codemedia.iso.AbstractBoxParser$1.class and .AbstractBoxParser.class…. took that jar, unpackaged it, removed both of those files, then repackaged as a .zip, added to library, cleaned and worked! no more conflict for me! (also no updates or additional downloads)

I had two different versions of Cordova .jar-files in my libs folder, I deleted the one I wasn’t even using and it worked right away.
Weird because I didn’t notice that before and it worked before and then suddenly stopped working…

The ADT R14 update changes where the classes go to the bin/classes directory (see http://tools.android.com/recent/buildchangesinrevision14). If you are using ANT, you should change the path for your classes from bin to bin/classes. This worked for me.

After trying all the other suggestions with no luck, I deleted all the contents of my projects ‘bin’ directory, then ran eclipse again and it worked.

I converted a non-library project to a library project, but it had a previously built jar file in the libs folder. Removing this jar file caused this error to go away.

I was facing the same issue then i saw while pushing my app some jar files which were loaded twice hence multiple dex error .Just go to your project properties -> Java Build Path and try unchecking jar which is being loaded twice.

by removing the duplicate library “JAR file” then remove BuildConfig.java file, Clean project and its work.