I’m struggling to understand the process of drawing to SurfaceView and therefore the whole Surface/Canvas/Bitmap system, which is used in Android.

I’ve read all articles and API documentation pages, which I was able to find on android-developers site, a few tutorials of android graphics, LunarLander source code and this question.

Please tell me, which of these statements are true, which are not, and why.

There is also one additional question:

Here are some definitions:

Also please keep in mind that, as this implies, a SurfaceView is a pretty heavy-weight object. If you have multiple SurfaceViews in a particular UI, stop and think about whether this is really needed. If you have more than two, you almost certainly have too many. 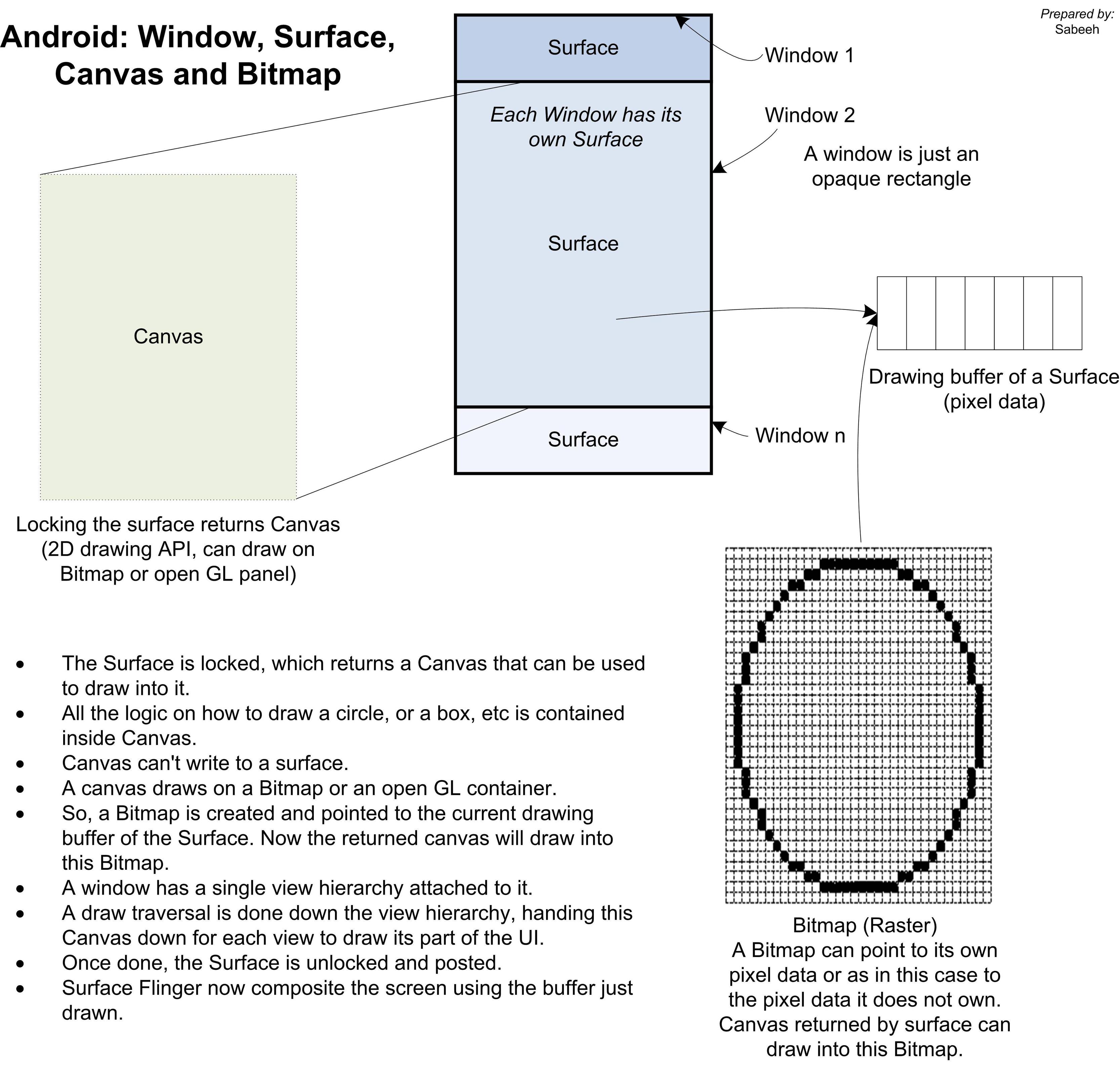 Here is a very basic and simple conceptual overview of how interaction happens among the Window, Surface, Canvas, and Bitmap.
Sometimes, a visual representation helps a lot in understanding twisted concepts.
I hope this graphic could help someone.

A Bitmap is simply a wrapper for a collection of pixels. Think of it as an array of pixels with some other convenient functions.

The Canvas is simply the class that contains all the drawing methods. It is similar to the Graphics class in AWT/Swing if you are familiar with that. All the logic on how to draw a circle, or a box, etc is contained inside Canvas. A canvas draws on a Bitmap or an open GL container but there is no reason why in the future it could be extended to draw onto other types of rasters.

SurfaceView is a View that contains a Surface. A surface is similar to a bitmap (it has a pixel store). I do not know how it is implemented but I’d imagine it is a some kind of Bitmap wrapper with extra methods for things that are directly related to screen displays (That is the reason for a surface, a Bitmap is too generic). You can get a Canvas from your Surface which is really getting the Canvas associated with the underlying Bitmap.

Yes, a canvas operates on a Bitmap (or an open GL panel). Surface gives you a Canvas that is operating on whatever Surface is using for its Bitmap style pixel store.

No. You could have as many surface views as you want.

3.SurfaceView is subclass of View, which, unlike other View’s subclasses and View itself, has its own Surface to draw in.

Previous article
Android WebView, how to handle redirects in app instead of opening a browser
Next article
android – How to Apply Corner Radius to LinearLayout