android – What is INSTALL_PARSE_FAILED_NO_CERTIFICATES error?

I was trying to change my default/main/startup (whatever you call it) activity by editing the androidmanifest.xml file. All i did was change the android:name property. however, this completely broke the entire app. when I try to install it fails and reads.

When I tried to change it back to its previous state, it was still giving me the same error… What have I done?

Did you edit the AndroidManifest.xml directly in the .apk file? If so, that won’t work.

Every Android .apk needs to be signed if it is going to be installed on a phone, even if you’re not installing through the Market. The development tools work round this by signing with a development certificate but the .apk is still signed.

One use of this is so a device can tell if an .apk is a valid upgrade for an installed application, since if it is the Certificates will be the same.

So if you make any changes to your app at all you’ll need to rebuild the .apk so it gets signed properly.

I found that this error can now also occur when using the wrong signing config. As described here, Android 7.0 introduces a new signature scheme, V2. The V2 scheme signs the entire APK rather than just the JAR, as is done in the V1 scheme. If you sign with only V2, and attempt to install on a pre-7.0 target, you’ll get this error since the JARs themselves are not signed and the pre-7.0 PackageManager cannot detect the presence of the V2 APK signature.

To be compatible with all target systems, make sure the APK is signed with both schemes by checking both signature version boxes in Android Studio’s Generate Signed APK dialog as shown here: 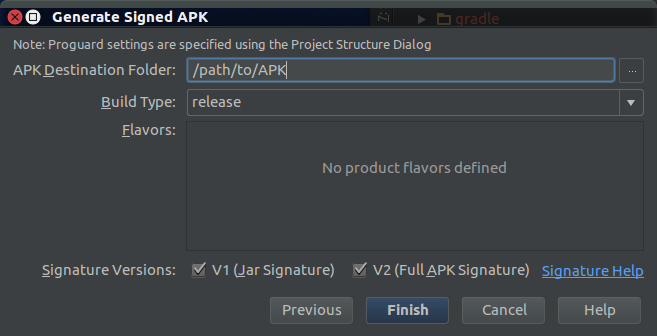 If only 7.0 targets are anticipated, then there is no need to include the V1 signature.

I found this was caused by my JDK version.

I was having this problem with ‘ant’ and it was due to this CAUTION mentioned in the documentation:

Caution: As of JDK 7, the default signing algorithim has changed, requiring you to specify the signature and digest algorithims (-sigalg and -digestalg) when you sign an APK.

I have JDK 7. In my Ant log, I used -v for verbose and it showed

I signed the JAR manually and zipaligned it, but it gave a slightly different error:

I found that answered here.

How to deal with INSTALL_PARSE_FAILED_INCONSISTENT_CERTIFICATES without uninstallation

I only needed to uninstall it and then it worked!

Now I only need modify the build.xml to use those options when signing!

Ok here it is: C:\Program Files\Java\android-sdk\tools\ant\build.xml

Most of the time the solution for this error is really simple:

solved (for me) using in keytool the args

and using in jarsigner

What kind of pitfals exist for the Android APK signing?

In my case, I could build and run release builds, but got the INSTALL_PARSE_FAILED_NO_CERTIFICATES error when trying to do a debug build.

The solution was to delete my debug.keystore file and let ADT recreate it. It had apparently expired.

A better long-term solution is to explicitly create a debug.keystore that does not expire after only a year, instead of letting ADT create it. Here is the command to do that:

When prompted, enter these values:

Conclusion: If you are supporting the device below android OS 7.0. Use V1 jar signature to generate the build.

This is an ugly but fast solution: use JDK 6 instead of 7.

After read Chloe’s answer, I uninstalled my JDK 7 (don’t need it currently anyways) and installed JDK 6. That fixed it. A better solution would make ant uses JDK 6 (without uninstalling 7). Maybe possible changing / setting this property:

in local.properties file. It’s in the project directory (root).

Android doesn’t work with JDK 7 anyways (only 6 or 5), so make that the ant script also uses JDK 6 or 5 is probably a good solution.

Its because previously generated build and current is having conflict in signature version between v1(jar signature) and v2(full APK Signature),

In newer Android Studio versions 3.2+, if you are trying to run release install, and you have not defined any signing configurations, it will show the error prompt and install will fail. What you need to do is either run the debug build or set up the signing configuration (V1 or V2) correctly.

This could happen if you try to include a .jar library that contains an AndroidManifest.xml file.

Setting environment variable JAVA_HOME to JDK 5 or 6 (instead of JDK 7) fixed the error.

Also u can check

after u add all that u need

most answers are true . and some another reasons that happens are

► your min sdk smaller than device sdk.
► you have the older application in your device with the same package name

After some time and multiple online threads on the subject I managed to fix my project.

It’s mainly taking into consideration the last files (could be images or layouts) that you put in. If you delete them, it will work out, and you can build your project again.

I was having this error in my Eclipse Console. It turns out that I had two jars with the same content but different names and they were conflicting with each other. I just deleted one of them and managed to install the app on the device.

I was getting this error because I did release that my ant release was failing because I ran out of disk space.

I got this error when I tried to install a Xamarin project built against Android N preview on a phone running api v23. Solution is to not do that.

Another way to get this error is to build using ant on macOS and have a Finder icon file (Icon\r) in the source tree of the app. It appears jarsigner can’t cope with the carriage return in the filename and, although it will claim the signing is valid if you -verify the APK, it always results in an APK that wont install on a device. Ironically, the Google Drive Finder plugin is a great source of Finder icon files.

The solution is to exclude the offending files (which are useless in the APK anyway) with a specifier like this in the fileset:

I had that problem with ionic / Visual Studio Code (Run Android on device):

I uninstalled the App on the mobile device (Settings / Apps), the error is gone and the app is starting.

It’s throwing this error for me today because I have an app with a min sdk of 28 and am hitting play on an emulator with an SDK version of 23. Usually this is not possible (AS gray’s out the play button), but today not so much.

Previous article
How to Define Callbacks in Android?
Next article
Android – Listen For Incoming SMS Messages