android – What is the difference between the Intel x86 Atom and Atom_64 system images?

I am using the Android SDK Manager to install the system image for the Android M Preview. However, I noticed that there are two separate images for the x86 platform.

What are the differences between the two and which one should I select for my 64-bit Ubuntu 15.04 installation? (My CPU includes AMD-V and it is enabled in the BIOS, in case that makes any difference.)

According with this article

Intel 64-bit CPUs have a 32-bit compatibility mode. While 32-bit
applications will run on 64-bit processors, compiling with a 64-bit
optimizing compiler allows them to take advantage of the architectural
benefits of a 64-bit environment.

How to run 64-bit apps on emulators

Create a new Android virtual device (AVD) based on Intel Atom processor 64-bit system image and open the AVD Manager in SDK Manager or ADT. Then click ‘create’ and fill the fields as shown in the Figure . Now the 64-bit AVD emulator is ready to run. 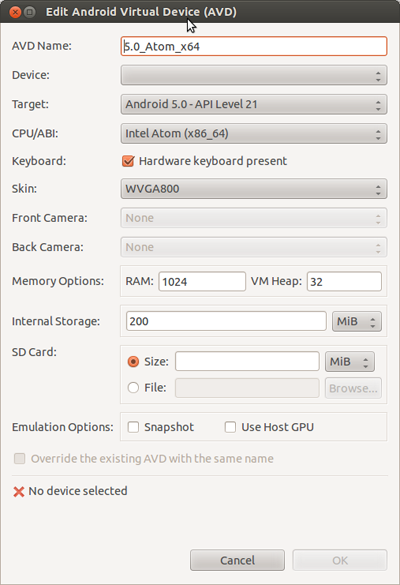 Android is ready for 64-bit processing

One of the key benefits of the move from 32-bit to 64-bit chips is
largely theoretical right now: support for exabytes of RAM, rather
than mere gigabytes. But the way 64-bit chips handle memory can also
lead to improved performance in some tasks.

Android with 64-bit technologies for Intel Atom processor-based platforms can help developers to optimize their applications now. Building Android applications for 64-bit is just as easy as building traditional 32-bit Android applications. You can now use the official Android 64-bit emulator to run and debug 64-bit apps.

Maybe this articles can help you to understand the difference between this system images.

The difference is that when using x86 images, it now uses fast, hardware-accelerated virtualization under the right conditions (HAXM) so it doesn’t feel like there’s a fat middle layer anymore.

FYI: In the official Android Studio documentation it says that “x86 system images run the fastest in the emulator.”

I haven’t tried the 64bit, so I can’t really comment on that. Maybe someone else can.

i have tried both and x86_64 happens to be a little slower than x86.
what i found out after a little research is that x86 can run on 32 bit based instruction set and 64 bit based while x86_64 runs only on 64 bit which needs somekind of more decoding…

you can also check here https://developer.android.com/ndk/guides/x86-64.html
for more info..