android – What is the maximum amount of RAM an app can use?

I am quite curious about this question concerning the memory management of the Android operating system so I hope for a quite detailed answer on that topic.

What makes me very curious:

Both of these limits are very low.

I have just recently downloaded the Android Task Manager to check my devices RAM. What I have noticed is that there are applications using around 40-50 megabytes of RAM, which is obvioulsy more than the mentioned maximum RAM usage of let’s say 32 MB. So how does Android determine how much RAM an app can use? How is it possible that apps exceed that limit?

Furthermore, I noticed that some apps of mine crash (killed by the system?) with an OutOfMemoryException when using around 30-40 Megabytes. On the other hand, I have apps running on my phone using 100 MB and more after some time (probably due to memory leaks) that do not crash or get killed off.
So it obviously also depends on the app itself when it comes to determining how much RAM can be spared. How is this possible?
(I conducted my tests with an HTC One S with 768 MB RAM)

Disclaimer: I am NOT affiliated with Android Task Manager app in any way.

What is the maximum amount of memory (in Megabytes / as percentage of the total RAM) that an Android application (that is not a system app) can use?

That varies by device. getMemoryClass() on ActivityManager will give you the value for the device your code is running upon.

Are there any differences between the Android versions?

Yes, insofar as OS requirements have increased over the years, and devices have to adjust to match.

Are there differences concerning the manufacturer of the device?

Which “side factors” are taken into consideration when it comes to determining how much RAM an app can use?

I have no idea what “side factors” means.

Early devices had a per-app cap of 16MB; Later devices increased that to 24MB or 32MB

That’s about right. Screen resolution is a significant determinant, as larger resolutions mean larger bitmaps, and so tablets and high-resolution phones will tend to have higher values yet. For example, you will see devices with 48MB heaps, and I wouldn’t be surprised if there are values higher than that.

How is it possible that apps exceed that limit?

You assume that the author of that app knows what (s)he is doing. Considering that memory usage of an app is difficult for a core Android engineer to determine, I would not assume that the app in question is necessarily providing particularly accurate results.

That being said, native code (NDK) is not subject to the heap limit. And, since Android 3.0, apps can request a “large heap”, usually in the hundreds of MB range, but that’s considered poor form for most apps.

Furthermore, I noticed that some apps of mine crash with an OutOfMemoryException when using around 30-40 Megabytes.

First of all: run your app and open Android Profiler tab in Android Studio.
You will see how much memory it consumes, you will be surprised but it can allocate a lot of RAM.

Also here is a great article in official docs with detailed instructions on how to use Memory Profiler which can give you an in-depth look of your memory management.

But in most of the cases, your regular Android Profiler will be enough for you. 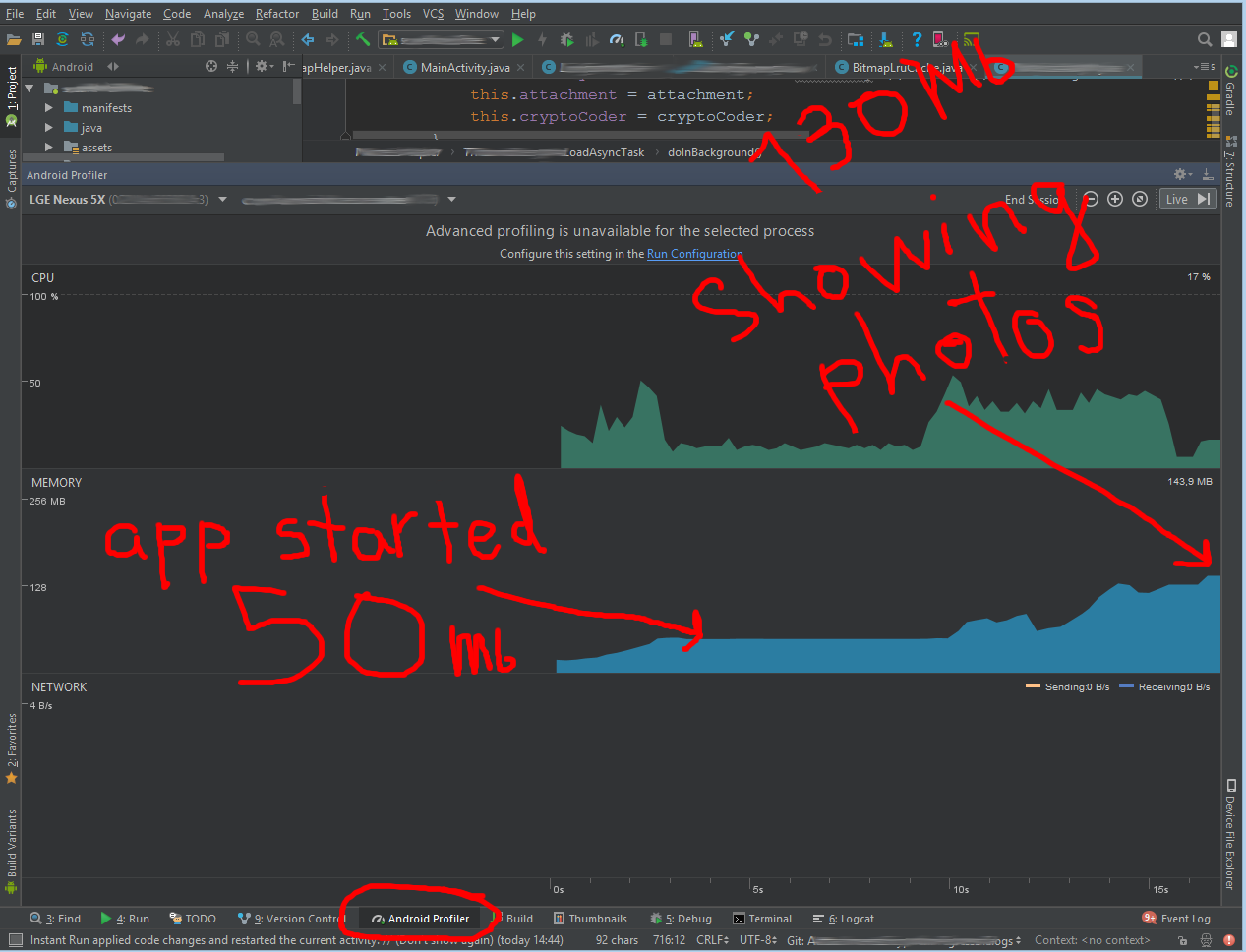 Usually, an app starts with 50Mb of RAM allocation but instantly jumps up to 90Mb when you start loading some photos in memory. When you open Activity with a ViewPager with preloaded photos (3,5Mb each) you can get 190Mb easily in seconds.

But this doesn’t mean you have issues with memory management.

The best advice I can give is to follow the guidelines and best practices, use top libraries for image loading (Glide, Picasso) and you’ll be OK.

But if you need to tailor something and you really need to know how much memory you can allocate manually you can get total free memory and calculate a pre-determined portion (in %) out of it.
In my case, I needed to cache decrypted photos in memory so I don’t need to decrypt them everytime user slides through the list.

For this purpose you can use ready to use LruCache class. It’s a cache class which automatically tracks of how much memory your objects allocate (or the number of instances) and removes the oldest to keep the recent by their usage history.
Here is a great tutorial on how to use it.

In my case, I created 2 instances of caches: for thumbs and attachments.
Made them static with singleton access so they are available globally throughout the app.

This is how I calculate available free RAM and how much I can bite out of it:

And this is how I use it in Adapters to get cached image:

and how I set it into cache in background thread (regular AsyncTask):

My app targets API 19+ so devices are not old and these portions of available RAM are good enough for cache in my case (1% and 3%).

Fun fact: Android does not have any APIs or other hacks to get the amount of memory allocated to your app, it’s calculated on the fly based on various factors.

P.S. I’m using a static class field to hold a cache but as per the latest Android guidelines its recommended to use ViewModel architecture component for that purpose.

Memory limits per app are here depending on screen size and Android version: https://drive.google.com/file/d/0B7Vx1OvzrLa3Y0R0X1BZbUpicGc/view?usp=sharing