Android: Zooming EditText Android Issue in translation And Getting Touch event of childView when Placed outside parentView

my question is related to android feature to zoom the parent consisting of multiple child view’s.

I am working on a Demo project to Zoom the child View and to pan infinitely.Zooming works perfectly as needed.

PROBLEM 1:
But if there is a EditText in the view and i try to zoom on that then below issues are faced by me.

I have tried two approaches to Zoom the content of the View but both approaches gave the same issue.

hierarchy of my demo project zooming the view(UML Diagram) 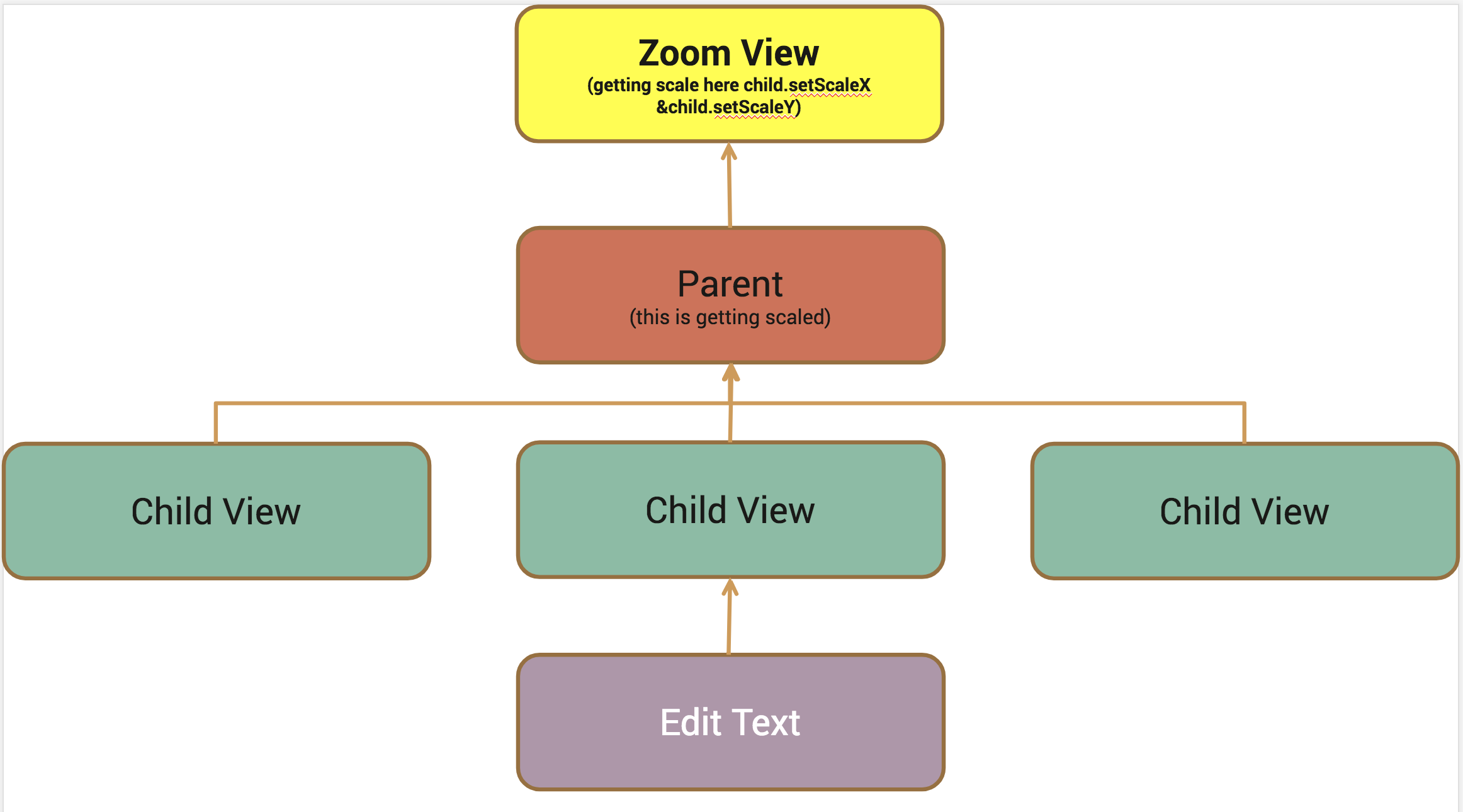 Basic problem is placing the cursor at the right position when the view is scaled to some value.

I have already referred to this thread

PROBLEM 2:
if i have a childView which is movable in the parent View then after zooming out if the childView is translated outside the bounds of parentView the events are ceased to capture and the child view becomes untouchable
i have tried using TouchDelegate but i don’t know how to expand the parentView touch area .Code reference Thread 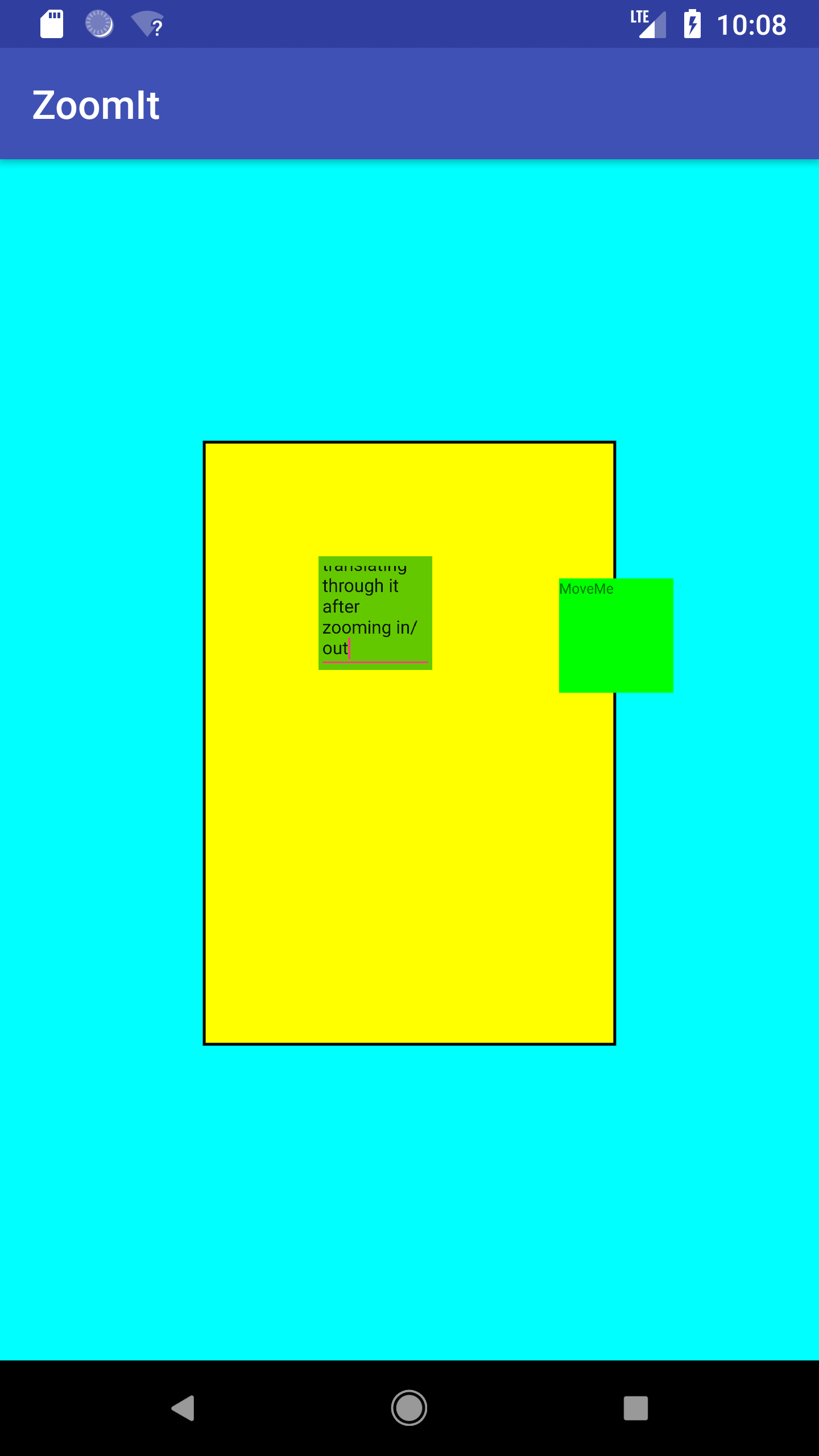 Note:
This is my first Question on StackOverflow So please recommend if some edits are needed.

This the the closest i got to solve above problem’s.

set layer type Hardware in the view which has text View. for me i
set it in green square view.

For above two:
This is a bug in android when you scale a view using the scaleX,scaleY api’s the EditText get’s event based on the current scale value of parent’s.But issue is with the Cursor of editText.

The best solution we got is we wrote our own EditTextView (which extend’s TextView).As we checked android framework source code we came to know that android use’s PopUpWindow to display cursor on screen.

So wrote our own EditText if you see the source code EditText code is not very complex and can be written on our own.And to solve the scaling issue of Cursor, we added our own Cursor PopUpWindow and made it Scale aware.

NOTE:
(UPDATE)
Check at demo code here customEditText and CustomCursor.
Run the project set focus pink focus(BY Android) will come ,wait for few seconds then the black cursor will appear that is the custom cursor.
It is a very basic example and we need to add all other edit text Feature’s on our own like multi-Select, popUpMenu etc.

PROBLEM 2: if i have a childView which is movable in the parent View then after zooming out if the childView is translated outside the bounds of parentView the events are ceased to capture and the child view becomes untouchable i have tried using TouchDelegate but i don’t know how to expand the parentView touch area

This solution is specific to the given problem not a generic one
as there can be multiple solution’s for this problem.
In this case 3 view’s are there:

The above code translate to : when child view translation is ended check the bound’s of parent and update the TouchDelegate accordingly.

As the problem i faced was when i scaled(Zoomed) the view then the View’s delegate was not updated so for that also solution is same make a callback from zoomView (parent) to yellowView (childView) onScaleEnded call setDelegate().

When scale changes the hitArea also changes but as per delegate nothing is changed so we need to update the rect of TouchDelegate.

Please feel free to discuss in comment section. If someone has a better solution Really eager to know.As we tried many different solution’s but nothing else worked.This is the best i found and i am using above code in production and haven’t faced any issue till now.

The best approach for translating and scaling EditText is to use scaleX, scaleY, translateX, translateY on this particular EditText instead of parent layout canvas translation.

By the way, it is possible to check if touch area and drawing area are the same in android studio using Tools -> Layout Inspector.

Previous article
excel – Select all cells in a column containing a text not a formula
Next article
c# – httpWebRequest Download and parse excel file?