I built an app and i’m planning to make a real time battle with Angular 2 and laravel. For example, you hit the “attack” button, and your opponent see his life going down in real time.

My app built with:

Now I’m searching and learning for my real time battle component,
and I saw different guides and tutorials for it:

The first tutorial is about how to use Laravel 5 and socket io.

The second one is how to use Angular 2 with NODS JS and socket io.

When I say real time, I mean that both users see the same thing that is happening on the screen)

My Backend and Frontend are totally divided and I have no setup with NodeJS anywhere in my app.

Both users need to see actions happening during a battle in my app, and It need to go through my laravel API and shown via my Angular 2 battle component

What’s the best approach to real time app (seem websockets) using Angular2 and Laravel 5.2 to get the desired result of what I’m trying to achieve? 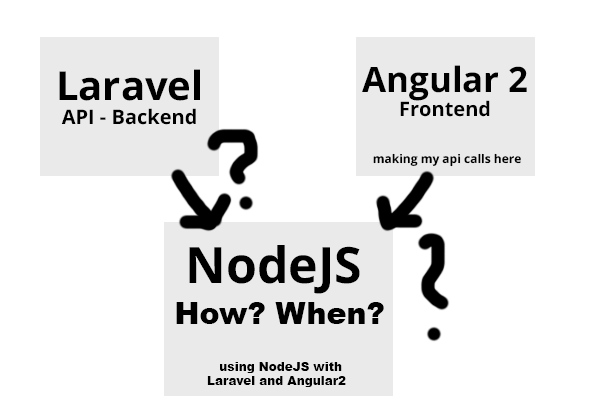 So yes, you would still need something (node) to host the socket.io server to interact with the client, through PHP or otherwise. Personally, I’d skip Laravel/PHP altogether and just use node with koa/express/whatever to template your client (html/js/css/etc) files. Feels like an unnecessary abstraction to me.

If you are planning to use websockets then there seems to be less use of laravel as only one socket is pretty capable of handling all the data that will be exchanged between the frontend and the backend, so if you don’t mind changing your engine you can try Meteor, https://www.meteor.com/

For the real-time character of your use-case, websockets are definitely the way to go. The players that should get the updates should be in the same ‘room’, so you can broadcast changes more easily. For the other functionality you can either use websockets or regular API calls to your backend directly from your client-side app code with some kind of communication between your api and the socket server, e.g. through Redis.

I’m sure there are more ways you can set this up, you just have to decide where you want what. Maybe introducing Redis is something you do not want, in that case your node app will have more to do. If you do want to use something like Redis, you’ll need to do API calls from either your frontend app or choose to do it through the node app anyway, combining the 2 options.

Questions: I am trying to connect to an Oracle database from Node.js in Windows 7. Is this possible? I have not found a plugin for Node.js which will do this for Windows. Are there any recommended wor...

Get all results from array that matches property [duplicate]

Questions: This question already has an answer here: Retrieve only the queried element in an object array in MongoDB collection 10 answers Answers: You want $filter here: useritems.aggregate([ { "$mat...

Questions: I’m programming an apartment & house rental site. Since there are never more than 10’000 properties for rent, it’s no problem to load em all into memory. Now, when a u...