I’m getting this error executing my Android app (I cleaned it and then built it, but the error is still present)

EDIT: I didn’t see “compile fileTree(dir: ‘libs’, include: [‘*.jar’])” it was compiling twice my libraries, so i just comment:

and it works fine.

This issue is quite possibly due to exceeding the 65K methods dex limit imposed by Android. This problem can be solved either by cleaning the project, and removing some unused libraries and methods from dependencies in build.gradle, OR by adding multidex support.

So, If you have to keep libraries and methods, then you can enable multi dex support by declaring it in the gradle config.

You can read more about multidex support and developing apps with more than 65K methods here.

For me the problem was, i had put a unnecessary complie library code in build.gradle

which was causing over 65k methods, so removed it,gradle sync, cleaned project, and then ran again and then this error stopped.
I needed just maps and gcm so i put these lines and synced project

Hi people i again encountered this problem and this time it was because of changing build tools version and it really required me to enable multidex..so i added these my app’s build.gradle file..

And create a class that extends Application class and include this method inside the class..

also include in OnCreate method too

Just in case if someone still struggling with this and have no clue why is this happening and how to fix. In fact this error

can have many reasons to happen but certainly not something related to your JDK version so don’t wast your time in wrong direction.
These are two main reasons for this to happen

First case can be fixed as follows:
Find out which dependencies you have included multiple times. In order to do this run following command in android studio terminal

this will return all the dependencies but jar files that you include from lib folder
try to get rid of duplication marked with asterisk (*), this is not always possible but in some cases you still can do it, after this try to exclude modules that are included many times, you can do it like this

this increases method limit but it is not the best thing to do because of possible performance issues
IMPORTANT adding only multiDexEnabled true to defaultConfig is not enough in fact on all devices running android <5 Lollipop it will result in unexpected behavior and NoClassDefFoundError. how to solve it is described here

I didn’t know (by then) that “compile fileTree(dir: ‘libs’, include: [‘*.jar’])” compile all that has jar extension on libs folder, so i just comment (or delete) this lines:

and it works fine. Thanks anyway! My bad.

I removed that library and I could run the project without any problem.

Mine got solved by enabling multiDex for debug builds.

Possible problem: You have exceeded dex 65k methods limit, may be you added some library or several methods before problem occurred?

If You have already updated your SDK and You also using google-play-services then you need to take care of the dependency because there are some kind of conflics with :

I think it’s conflicts of .jar file in your project.

I have removed android-support-v4.jar from libs folder and its working !!!

if your project gives error, check in your build.gradle file

You can see the dependencies of your gradle module(s) (you might have only one module in your project) using the following gradle command (I use the gradle wrapper that gets created for you if you have created your project in Android Studio/Intellij Idea). Run this command in your project’s root directory:

After adding those exclude directives and retrying to run, I got a duplicate file error for NOTICE.txtthat is used by some apache commons libraries like Logging and Collections. I had to exclude that text file when packaging. In my build.gradle, I added:

It turned out that the new library (the Validator) can work with slightly older versions of its dependencies/modules (which are already imported into my build path by another library (Robolectric)). This was the case with this specific library, but other libraries might be using the latest API of the underlying dependencies (in which case you have to try to see if the other libraries that rely on the conflicting module/dependency are able to work with the newer version (by excluding the older version of the module/dependecy under those libraries’s entries)).

In my case, I got this error when there are 2 or more libraries conflict (same library but different versions). Check your app build.gradle in dependencies block.

There are two alternatives that’ll work for sure:

If the above method didn’t worked, try the next.

Updating my Java SDK to the latest version 1.7.0_79 and updating the SDK Location under Project Structure solved the problem for me.

My problem was that apart from having

I had this trace as well:

The problem was that I was adding the same class in two differents libraries. Removing the class/jar file from one of the libraries, the project run properly

For me i was adding the whole playstore dependencies

But i needed google map only , so i made it more specific and the error was resolved.

You may be using a low quality cable/defected cable to connect your device to the PC, I replaced the cable and it worked for me.

In Your gradle.build file, Use this

And it works fine.

If you want to see what exactly is causing the error, try building your project via gradle terminal, like this ./gradlew assembleDebug --stacktrace --debug . I’ve seen the following error in my case com.android.dex.DexIndexOverflowException: method ID not in [0, 0xffff]: 65536

This happened when I was trying to entegrate Google Maps to my project. To fix it, I simply checked libraries I was including

I simply changed it to

and problem was gone

I had the same error after converting my project to Kotlin. My problem was that my jre location was changed to an invalid path during the process (I wonder why this could happen… made me waste time). Fixed it by doing this:

Unchecked the Use embedded JDK option, which was pointing to an old JDK installation, and selected the correct one:

After changing this, the error disappeared

i upgraded the java to the latest version 8 previously it was 7 and then go to OPEN MODULE SETTING right clicking on project and changed the jdk path to /usr/lib/jvm/java-8-oracle the new java 8 installed. And restart the studio

I am using ubuntu 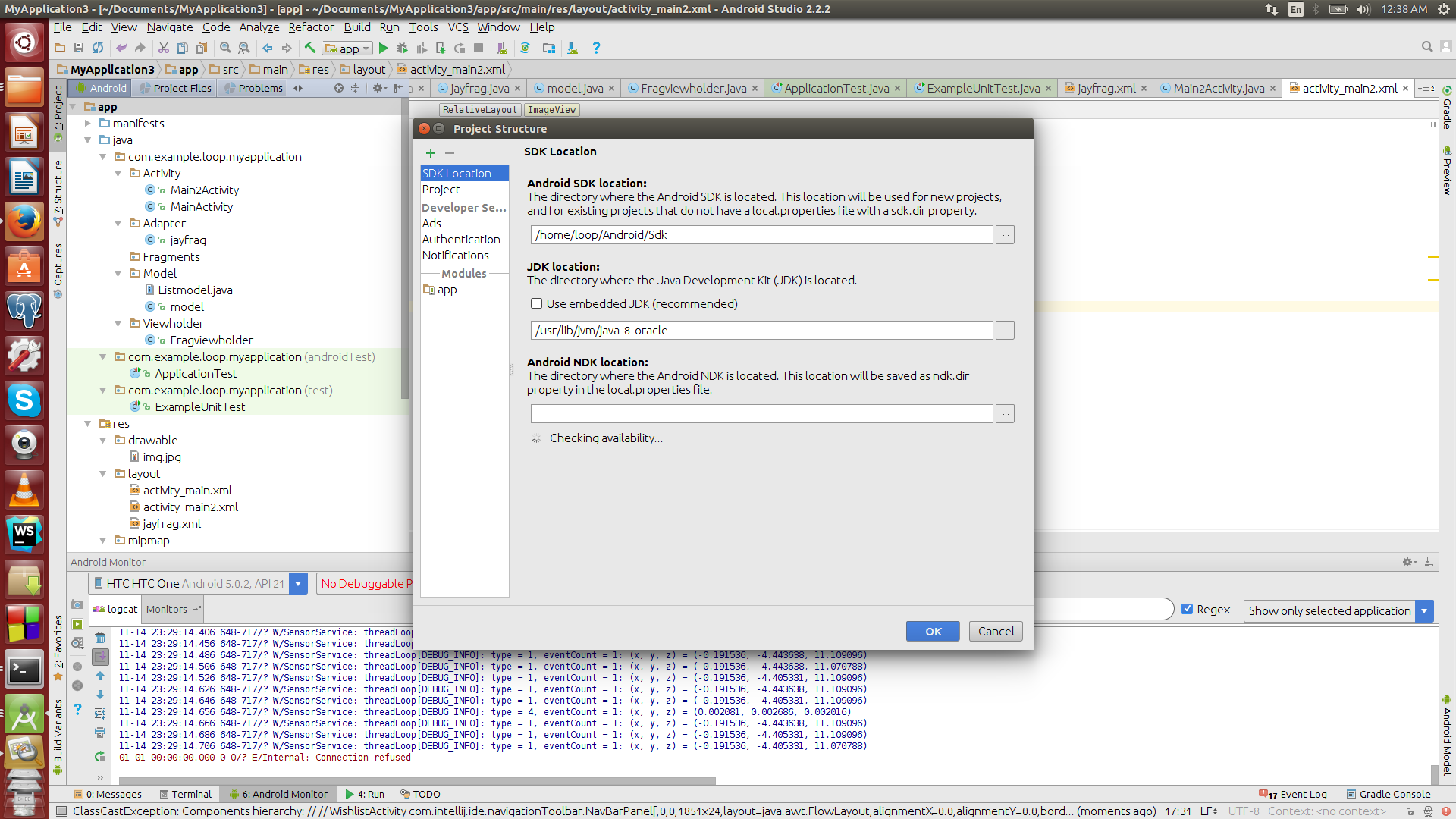 Previous article
android – How to open standard Google Map application from my application?
Next article
File Explorer in Android Studio