c# – What's a good way to overwrite DateTime.Now during testing?

I’ve got some (C#) code that relies on today’s date to correctly calculate things in the future. If I use today’s date in the testing, I have to repeat the calculation in the test, which doesn’t feel right. What’s the best way to set the date to a known value within the test so that I can test that the result is a known value?

My preference is to have classes that use time actually rely on an interface, such as

With a concrete implementation

Then if you want, you can provide any other kind of clock you want for testing, such as

There may be some overhead in providing the clock to the class that relies on it, but that could be handled by any number of dependency injection solutions (using an Inversion of Control container, plain old constructor/setter injection, or even a Static Gateway Pattern).

Other mechanisms of delivering an object or method that provides desired times also work, but I think the key thing is to avoid resetting the system clock, as that’s just going to introduce pain on other levels.

Also, using DateTime.Now and including it in your calculations doesn’t just not feel right – it robs you of the ability to test particular times, for example if you discover a bug that only happens near a midnight boundary, or on Tuesdays. Using the current time won’t allow you to test those scenarios. Or at least not whenever you want.

Ayende Rahien uses a static method that is rather simple…

I think creating a separate clock class for something simple like getting the current date is a bit overkill.

You can pass today’s date as a parameter so you can input a different date in the test. This has the added benefit of making your code more flexible.

Using Microsoft Fakes to create a shim is a really easy way to do this. Suppose I had the following class: 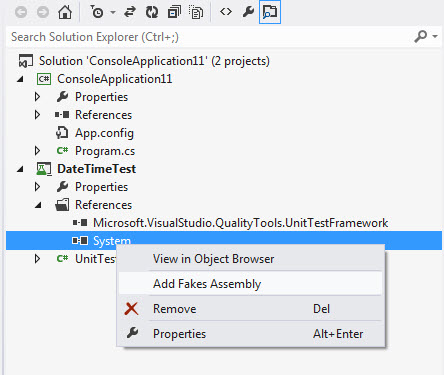 Finally, Here is what the test class would look like:

The key to successful unit testing is decoupling. You have to separate your interesting code from its external dependencies, so it can be tested in isolation. (Luckily, Test-Driven Development produces decoupled code.)

In this case, your external is the current DateTime.

My advice here is to extract the logic that deals with the DateTime to a new method or class or whatever makes sense in your case, and pass the DateTime in. Now, your unit test can pass an arbitrary DateTime in, to produce predictable results.

Another one using Microsoft Moles (Isolation framework for .NET).

Moles allows to replace any .NET
method with a delegate. Moles supports
static or non-virtual methods. Moles
relies on the profiler from Pex.

You could inject the class (better: method/delegate) you use for DateTime.Now in the class being tested. Have DateTime.Now be a default value and only set it in testing to a dummy method that returns a constant value.

EDIT: What Blair Conrad said (he has some code to look at). Except, I tend to prefer delegates for this, as they don’t clutter up your class hierarchy with stuff like IClock…

I faced this situation so often, that I created simple nuget which exposes Now property through interface.

Implementation is of course very straightforward

You can install module right from the GUI Nuget Package Manager or by using the command:

And the code for the Nuget is here.

The example of usage with the Autofac can be found here.

Have you considered using conditional compilation to control what happens during debug/deployment?

Failing that, you want to expose the property so you can manipulate it, this is all part of the challenge of writing testable code, which is something I am currently wrestling myself 😀

A big part of me would preference Blair’s approach. This allows you to “hot plug” parts of the code to aid in testing. It all follows the design principle encapsulate what varies test code is no different to production code, its just no one ever sees it externally.

Creating and interface may seem like a lot of work for this example though (which is why I opted for conditional compilation).

Questions: I have a Gridview that has it’s DataSource as an ObjectDataSource, with no templates on the .aspx page. This is a legacy application that I have inherited. When attempting to Edit and...

Questions: Closed. This question needs details or clarity. It is not currently accepting answers. Want to improve this question? Add details and clarify the problem by editing this post. Closed 5 days...

Questions: I am trying to return a PDF with simple text, but getting the following error when downloading the document: Failed to load PDF document. Any ideas on how to resolve this is appreciated. Me...

Previous article
c# – Issue with UserControl within a ListBox with VirtualizationMode.Recycling
Next article
c# – Need help getting started with a program i've been wanting to create for a while, just not sure how