I’ve upgraded to El Capitan and since then I can’t update my pods.

So I’ve tried to reinstall CocoaPods and got this:

I am the administrator on this computer. Why is this happening?

This is caused by the new System integrity protection feature introduced in El Capitan. It restricts even administrators from writing to /usr/bin.

Your best option would be to install gems without needing sudo. There is a good guide on how to do that.

If you don’t want to do that, you can install CocoaPods to /usr/local/bin instead as shown in this answer with:

This should work for you

For whatever reason, the rootless stuff seems less restrictive when one simply upgrades the system. I could sudo gem install cocoapods just fine on a machine upgraded from 10.10 – however, binstubs are no longer installed into /usr/bin:

We have heard from some users that they receive this error when doing a system-wide installation:

We aren’t sure why gem behaves differently on some systems, but this can be solved by passing -n /usr/local/bin to the install command, so that the pod executable gets installed there.

Regarding the original question/problem:

I found I had the same problem with several GEMS, so I generalized the recognized answer (Keith Smiley) to update ALL local gems… (on El Capitan with rootless in force)

This works well and will spit out a verbose log of all updates and errors.

I saw many errors. They were all ‘unable to convert’ errors. Parsing many docs will encounter a “skipping” error… like this:

I believe these skipping errors are not problems.

CocoaPods will be updated during this process, along with all the other local GEMS, depending on how current your local GEMS are. I believe this is the best way to handle the rootless issue (which is the cause of the problem).

Your best option for installing Pods for custom and standard installation
Refer the Link :https://github.com/CocoaPods/CocoaPods/issues/3692 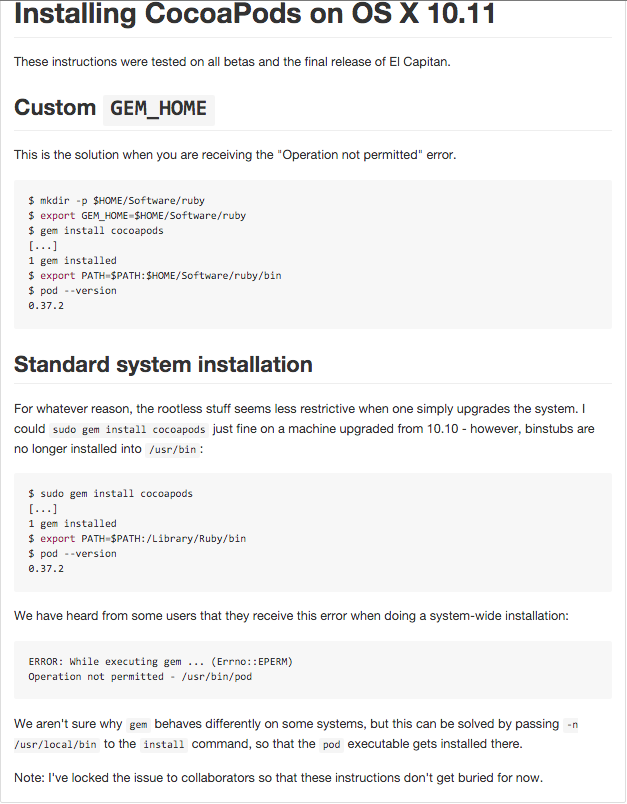 For me it worked with:
sudo gem install -n /usr/local/bin cocoapods –pre

Previous article
purpose of .bind(this) at end of ajax callback?
Next article
Width and Height Equal to its superView using autolayout programmatically?