I’m getting the following error when trying to install an android platform on a Cordova project. I’ve been following this guide: https://cordova.apache.org/docs/en/latest/guide/cli/

A problem occurred configuring root project ‘android’.
You have not accepted the license agreements of the following SDK components: [Android SDK Platform 24].

I’ve searched all over for ways to accept the license agreement of Android SDK Platform 24, but no real luck.

Thank you ahead of time.

You can also just execute

Or for Windows execute

(credit for windows command to @puneet-kumar)

I’m not exactly sure how cordova works, but once the licenses are accepted it creates a file. You could create that file manually. It is described on this question, but here’s the commands to create the required license file.

When I installed Android Studio it installed Platform 25, but not 24. To install 24:

I had exactly the same problem. Then i installed “Android 7.0 (API 24) > SDK Platform” and it worked. 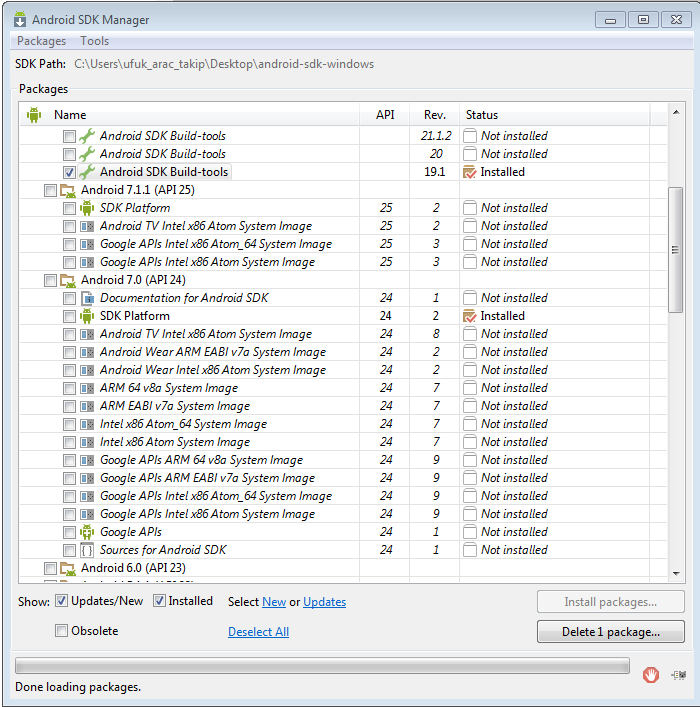 The simplest way to solve this issue is to accept the licenses using the following command:

You will be presented with disclaimers. In order to continue your development efforts, you need to answer ‘y’ to all disclaimers.

None of the above solutions worked for me and finally this single line accepted all android licences.

I had the issue, you do not need to copy or to create any folder, just be careful of your SDK path, it must be the same of the environnement variable (ANDROID_HOME), wich wasn’t the same for me, dunno why.

In my case I don’t use the Android studio (I am using eclipse). I did the following step:
Solved just by running the command

Which created a licenses directory and added a file called android-sdk-license inside it.

and accept the license (however, in my case I didn’t need to do that)

I had the Android SDK by installing the Android Studio and got this error too. There’s a simple solution from the user guide.

This error can come if the system is not picking up the ANDROID_HOME environmental variable from the proper path. Make sure you have installed the Android SDK and have set the ANDROID_HOME variable properly to the appropriate path as in the below image:

If the ANDROID_HOME variable is not defined, the system tries to pick the path from a default path(this might not be the path where the Android SDK is defined, leading to this issue).

It is because by default at the time of this writing , Ionic CLI tool is defaulted to

That is the reason why it complains that you did not accept license agreement , but in reality you did not install the SDK packages for that API Level yet alone accept the license.

So what you need to do is either

You can do it manually and even verify it by running

the file can be found at your-awesome-app/config.xml
open it and add this line , since its hidden as stated above

You can add the current SDK Packages which the CLI is showing , Which in your case it is 24 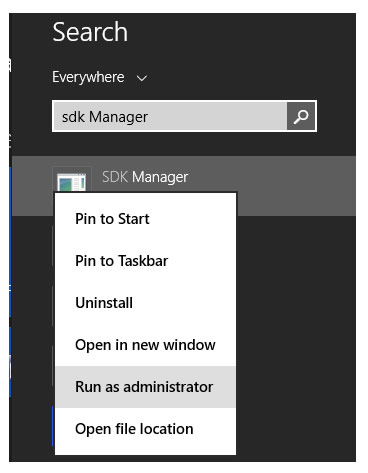 Install the SDK API Packages which you are targeting 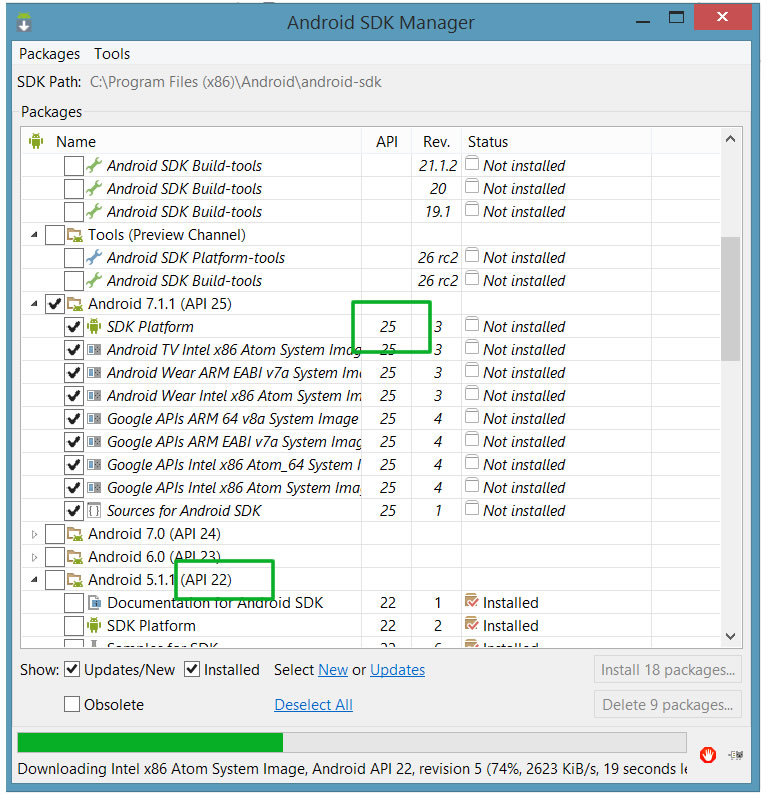 How did I know this?
I did it this morning and that’s how I solved it and now am playing Sticky Bubble on Android to relax a bit.

In my case (Dockerfile script to build an Android CI container – https://github.com/menny/docker_android), I had to do these steps:

it’ll ask you to accept whatever the agreements remaining to be accepted. you’ll just have to type “y” and enter.

Will solve the issue 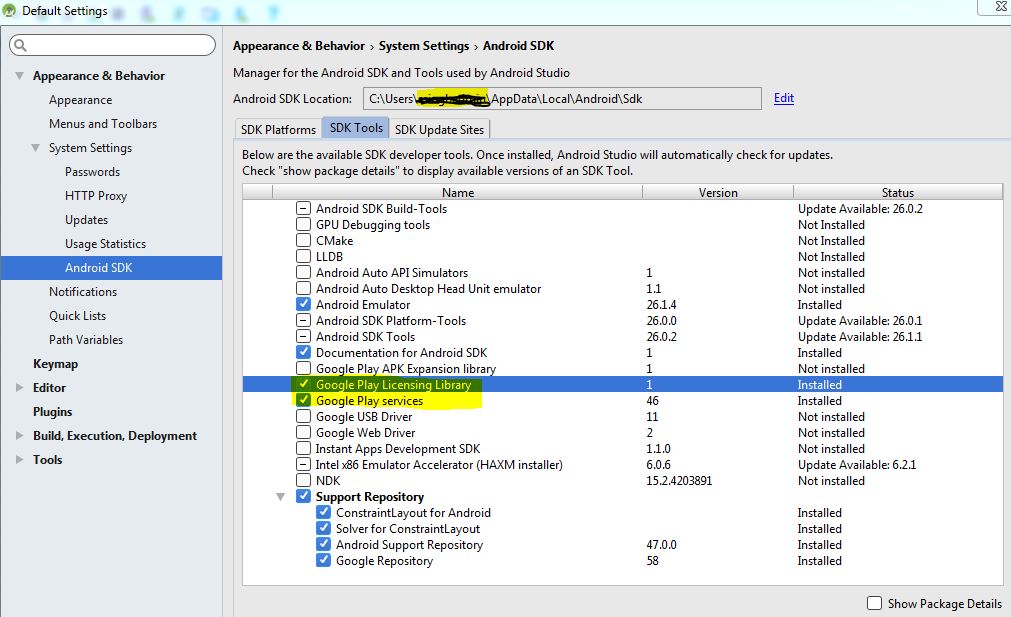 I am using Mac and I resolved it using this command:

Then I had a list of 6 licenses to accept and its resolved after that.

You can also follow the “official” way.
Run “sdkmanager –licenses” within tools/bin folder of Android SDK installation and accept all licenses. Done!

For macOS or Linux it’s the same command.

I had to update the android sdk

at some point it will ask you for license agreement, press y. After that you need to remove the angular platform.

It needs a latest stable sdk-platform installed. I installed SDK-Platform from API 25. It fixed my problem. 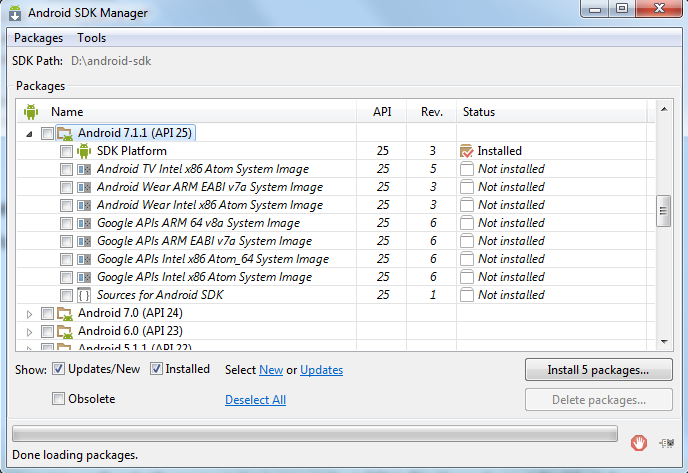 This issue is surfacing when already an old version of SDK Manager is in the machine from where the approach of Android build is Changed which requires “android studio”. I faced this in Visual Studio that was repeatedly halted with Error Message, “You have not accepted the License for version 25”. The solution for this is “Install the Android Studio” and then “go to Environment Variables” and set the ANDROID_HOME to “C:\Users\\AppData\Local\Android\Sdk” (This path can be picked from Android Studio, Menu >> Tools >> SDK Manager. Also use the same in “path” of Environment Variables. This way, the new SDK manager is mapped for pickup by Visual Studio Build for Cordova Application.

Wish others don’t waste their time in this mess.

Changing the target build might work as referenced here

If you want to specify the SDK version you can do so by adding the following line to your config.xml in the root of your ionic / cordova project

you need to manually re-install sdk
this help me: https://forum.ionicframework.com/t/you-have-not-accepted-the-license-agreements-of-the-following-sdk-component/69570/6

Hope this will work for someone out there
I was facing the same issue! I had 2 sdks, named as sdk and sdk1. It was default linked to sdk but the working one was sdk1.
So I went to Environment Varaible and added
ANDROID_HOME and path of the sdk1, i.e. in my case was C:\Users\tripa_000\AppData\Local\Android\sdk1 , and it solved my problem!

For me I was Building the Ionic using “ionic build android” command and I was getting the same problem!
The solution was simply

I just ran into this issue, and what solved it for me on windows, you are using command line, and you recently installed the android sdk, you must restart Command Prompt or Power Shell after you install the android sdk.

its mean miss match Android SDK version of cordova with the version you installed. For an example cordova support Android SDK 24 but you don’t have Android sdk 24. it may be reverse.

This will update your android SDK and accept the license in the same time (ex for Android 25):

The problem for me was that my ANDROID_HOME variable was being set to another installation I forgot existed. If this is your problem, delete the old installation.