I don’t understand why I cannot make the following code work. I want to connect with JavaScript to my server console application. And then send data to the server.

Here is the server code:

and here is the JavaScript:

When I run that code this is what happens:

Note that when I run the JavaScript the server accepts and successfully establishes a connection. JavaScript is not able to send data though. Whenever I place the send method it will not send even though a connection is established. How can I make this work?

WebSockets is protocol that relies on TCP streamed connection. Although WebSockets is Message based protocol.

If you want to implement your own protocol then I recommend to use latest and stable specification (for 18/04/12) RFC 6455.
This specification contains all necessary information regarding handshake and framing. As well most of description on scenarios of behaving from browser side as well as from server side.
It is highly recommended to follow what recommendations tells regarding server side during implementing of your code.

In few words, I would describe working with WebSockets like this:

Implementing own WebSockets protocol definitely have some benefits and great experience you get as well as control over protocol it self. But you have to spend some time doing it, and make sure that implementation is highly reliable.

In same time you might have a look in ready to use solutions that google (again) have enough.

WebSockets are implemented with a protocol that involves handshake between client and server. I don’t imagine they work very much like normal sockets. Read up on the protocol, and get your application to talk it. Alternatively, use an existing WebSocket library, or .Net4.5beta which has a WebSocket API.

Since you are using WebSocket, spender is correct. After recieving the initial data from the WebSocket, you need to send the handshake message from the C# server before any further information can flow.

Something along those lines.

You can do some more research into how WebSocket works on w3 or google.

(Posted answer on behalf of the OP).

I am able to send data now. This is my new version of the program thanks to your answers and the code of @Maksims Mihejevs.

When I run that code I am able to send and receive data from both the client and the server. The only problem is that the messages are encrypted when they arrive to the server. Here are the steps of how the program runs: 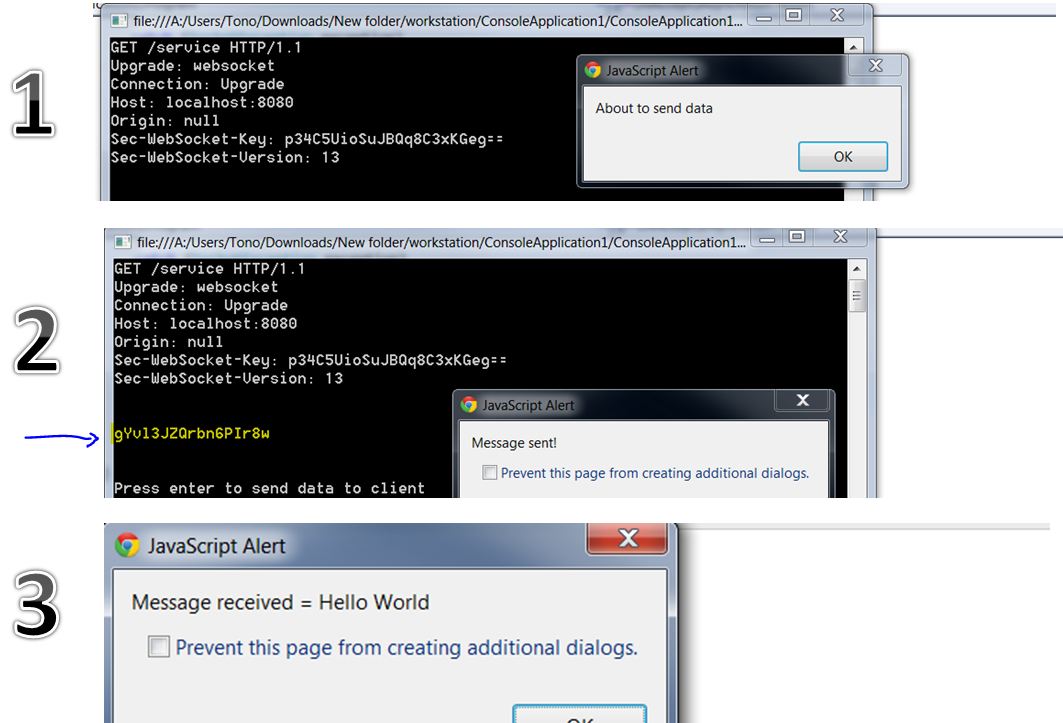 Note how the message from the client is encrypted.

.net – How to correctly read the method signature of the .Any function in C#

Questions: I really enjoy using the aggregate functions that C# provides such as .Any(), but I struggle to understand what my options are just looking from the method signature: Can someone help me be...

c# – i need help to upload a image in datagridview

Previous article
MVVM Madness: Commands
Next article
What is the performance impact of the universal selector?