I just learned that mutating func is just a curried func with first parameter as inout, so the code below will work and change firstName to "John"

but the odd thing happend when I add property observer to p like below, you can see firstName is still “Matt”, why? 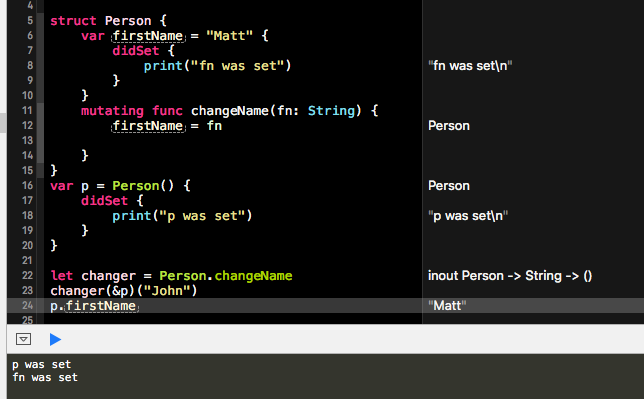 An interesting note to take ist that the observer is called before the curried setter is called:

So it seems that acquiring the setter method on the inout struct performs the actual mutation. This is explained by how inout parameters work semantically: When the parameter is passed to the function its value is copied to a place where the function can mutate it. When the function returns, the value is copied back to the original place, triggering setter observers once, whether the value did change or not.

When we change the way to get the pre-filled curried setter to:

It seems that the compiler understands that closing over an inout value is a bad idea, as it is basically taking a reference on a value type.

The closure would let you change the value of the struct at any time, even when the compiler assumes it to be constant. To prevent this unfortunate situation, the compiler simply forbids closing over the inout.

You found a case which fools the compiler and works around the diagnostic. This seems to be an error and it should be filed.

One of the last two lines should emit an error, similar to let x = f.foo.

in the newest accepted proposal 0042-flatten-method-type, self is no more passed as curried function, so this problem is solved in the Swift 3

Questions: Looking for a way to use Swift extensions in a separate file or an alternative solution. Creating an extension only works as long as the extension is written in the same file it is being us...

Not able to set Interactive Push Notifications on iOS8

Questions: I was already able to set Interactive LOCAL notifications, but the Remote notifications aren’t working. I’m using Parse.com to send the JSON My AppDelegate.Swift looks like this...

Previous article
iOS7 and iOS8: how to detect when user said No to a request for push notifications
Next article
Is there a difference between <div /> and <div></div>?