What is the diffirence between the @id/ and @+id/?

In @+id/ the plus symbol + instructs to create a new resource name and add in to the R.java file but what about @id/? From the documentation of ID: when referencing an Android resource ID, you do not need the plus symbol, but must add the android package namespace, like so:

But in the image below Eclipse doesn’t suggest any kind of @android:id/. 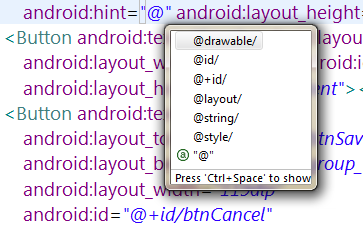 you refer to Android resources , which are already defined in Android system, with @android:id/.. while to access resources that you have defined/created in your project, you use @id/..

As per your clarifications in the chat, you said you have a problem like this :

If we use android:id="@id/layout_item_id" it doesn’t work. Instead @+id/ works so what’s the difference here? And that was my original question.

Well, it depends on the context, when you’re using the XML attribute of android:id, then you’re specifying a new id, and are instructing the parser (or call it the builder) to create a new entry in R.java, thus you have to include a + sign.

While in the other case, like android:layout_below="@id/myTextView" , you’re referring to an id that has already been created, so parser links this to the already created id in R.java.

As you said in your chat, note that android:layout_below="@id/myTextView" won’t recognize an element with id myTextViewif it is written after the element you’re using it in.

the + sign is a short cut to add the id to your list of resource ids. Otherwise you need to have them in a xml file like this

Sometimes you see references in your layout files like:

The ‘+’ means to create the symbol if it doesn’t already exist. You don’t need it (and shouldn’t use it) when referencing android: symbols, because those are already defined for you by the platform and you can’t make your own in that namespace anyway.

Completely copied from this source

+id Plus sign tells android to add or create a new id in Resources.

it just help to refer the already generated id..

From the Developer Guide:

The at-symbol (@) at the beginning of the string indicates that the XML parser should parse and expand the rest of the ID string and identify it as an ID resource. The plus-symbol (+) means that this is a new resource name that must be created and added to our resources (in the R.java file). There are a number of other ID resources that are offered by the Android framework. When referencing an Android resource ID, you do not need the plus-symbol, but must add the android package namespace, like so:

There’s a bug with Eclipse where sometimes if you just created a new @+id/.., it won’t be added immediately to the R.java file, even after clean-building the project. The solution is to restart Eclipse.

This I think should be solved as soon as possible, because it may (and from experience, will) confuse some developers into thinking that there’s something wrong with their syntax, and try to debug it even if there’s really nothing to debug.

Android uses some files called resources where values are stored for the XML files.

Difference between @+id and @id is:

We use @+id with android:id="", but what if the id is not created and we are referring it before getting created(Forward Referencing).

In that case, we have use @+id to create id and while defining the view we have to refer it.

Please refer the below code:

In the above code,id for Spinner @+id/spinner is created in other view and while defining the spinner we are referring the id created above.

So, we have to create the id if we are using the view before the view has been created.

If the view item performs the same operation, you can use the @+id for each entry in any layout because during compilation of multiple @+id/foo the R.java file only creates one enumeration. So for example if I have a save button on each page that performs the same operation, I use android:id=”@+id/button_save” in each layout. The R.java file only has one entry for the button_save.