I want to know, If Android Supports MVC (Model View Controller) structure ? If support then
1. What is Controller ?
2.What is Model ? and
3. What is View ?

Please clear me. I have some confusion about this.

Which design patterns are used on Android?

The actual Activity class doesn’t extend android’s View class, but it
does, however, handle displaying a window to the user and also handle
the events of that window (onCreate, onPause etc).

This means, that when you are using a MVC pattern, your controller
will actually be a pseudo View-Controller. Since it is handling
displaying a window to the user, with the additional view components
you have added to it with setContentView, and also handling events for
atleast the various activity life cycle events.

In MVC, the controller is supposed to be the main entry point. Which
is a bit debatable if this is the case when applying it to android
development, since the activity is the natural entry point of most
applications.

So, Pseudo MVC in android : 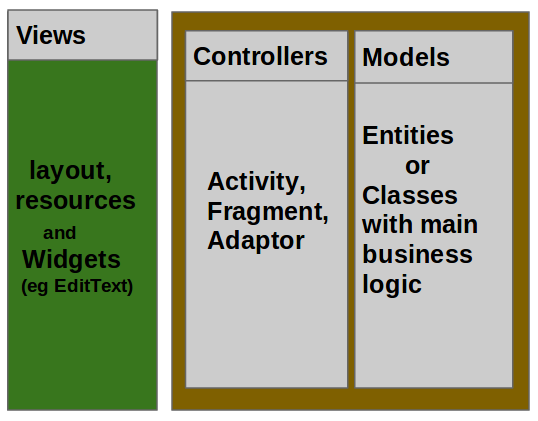 MVC is already implemented in Android

Model = the classes that implement the application logic

Not really MVC but becoming more MVC with Room and LiveData

In classical MVC the controller is about decision making, which action to run next. The view reads the data from the model and updates it’s own fields.

In Android activities are doing both, they make decisions what action to run in answer of an event AND they set the fields of the layouts. They also read data from the model and wire up widgets. The activities combine the logical tasks of both, the classical controller AND the classical view.

On the other hand, if you apply libraries like Room Android is becoming much more MVC again. Room and LiveData enable views to observe changes in the model all way down to changes in the database. If you cleanly separate view stuff and reduce controllers to decision making, you can structure your architecture in a way, that it really deserves the name MVC again.

It depends on the developer. It is possible to apply real MVC to Android, but it is not the default case.

The primary goal of implementing the MVC pattern is that doing so allows you to then later ‘pull out’ any one of them and slap in a new one without little or no necessary change to the other two.

Model: All about the data. What is manipulated, what is stored and how.

View: All about the UI or presentation. What is displayed and how.

Controller: The event handler. Dictates when the other two are run in response to events.

In Android, this implementation of MVC has the controller in the form of a class that extends the Activity class. After all, it is this class that initially receives the ‘events’ that make up the lifecycle of an Android Activity (i.e. onStart(), onCreate(), onSuspend(), onStop(), onResume(), onDestroy). This lifecycle will likely change as Android evolves so it makes sense to represent it as the Controller component of the MVC pattern.

Again, with this MVC implementation, I can pull out any one of the three components and put in essentially a whole new interface (View), or a whole new database (Model), or an new Activity lifecycle (Controller) with no change to the other two. The only necessity is that each component respects the boilerplate template listed below.

When reviewing each class, make note of the member variables, mController, mAppView, and mAppModel, and see how and when they are referenced in each java file.
These member variables are ‘the hooks’ that allow each component to reference each other.

The controller, appController, implements most of not all the ‘Activity lifecycle’ mehtods and in turn calls methods in the view, appView. That means the standard lifecycle methods, onStop, onResume, onDestroy, etc. are implemented not only in the Controller but also in the View portion of this MVC pattern. You’ll see later that that is true in the Model portion as well.

You can see below in the View implementation, appView, the member variable, mController, is used to access Activity methods and yet allows the separation of the Activity (Controller) from the UI (the layout, the menu, etc.).

Further, you’ll see a helper class, dbHelper, being introduced in the constructor.

As you can see below, SQLite is the database used in this application. However, switch out this helper class, dbHelper, and you can use a completely different database and the other components are none the wiser.

Included below, are some rudimentary methods (open, close, etc.) to give you an idea of the functions performed here. Further, note the method onDestroy() is here that closes the database connection. It is called by the View above which in turn is called by the Controller when it is destroyed.

It is this helper class that knows the names of the fields in the database.
With this implementation, the view, the controller and even the Model doesn’t really need to know the type of database used or even the field names frankly.

Previous article
How to control landscape and portrait programmatically in android?
Next article
How can i install support library android?