In Android Studio 2.2 there is supposed to be a test recording function? Where do I find it and how do I use it?

Screenshot of my pc: 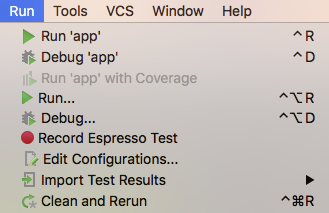 Download it here or patch directly from android studio preview 2.2

Update may 30:
Android Studio 2.2 preview 2 is out, but no ‘Record Espresso Test’ option yet.

Unfortunately the Espresso Test Recorder is still not in this build; we’re addressing a few more issues and then hope to have it ready in the next build!

Update:
It was not in the Advanced Espresso presentation as I expected, but in What’s new in Android development tools (credit to flackery). They show where to find it:

Espresso Test Recorder: Sometimes writing UI tests can be tedious. With the Record Espresso UI tests feature, creating tests is now as easy as just using your app. Android Studio will capture all your UI interactions and convert them into a fully reusable Espresso Test that you can run locally or even on Firebase Test lab. To use the recorder, go to the Run menu and select Record Espresso Test.

However there is no way to get that option in the current release, updating all (platform)tools etc won’t make a difference either.

For now we can only assume that this was unintentionally left out, and will be included in the first next release.

The only sensible thing I could find about this is

Creating tests is now as easy as using your app. Run your app in debug mode and enable recording, and this feature will capture UI events and convert them into Espresso Tests that you can run locally or even in the Firebase Test lab.

Running in debug is simple, but enabling recording.. I’m not sure what they mean by that. There is a recording option, but that is for capturing the screen and saving it to a mp4 file.

There is currently nothing to be found on the net, and nothing in android studio itself either, that explains this feature in more detail than “it’s there”.

There will however be a talk at Google I/O today, Advanced Espresso, where they will talk about this new feature and I expect it to be clearer after that.

I will update my answer once I’ve seen the presentation.

As described in the Google I/O session ‘What’s new in Android development tools’, we can access the ‘Record Espresso Test’ from the ‘Run’ menu.

Unfortunately this item is not available in Android Studio 2.2 Preview 1, and might be made available in a future release.