Excel 2007 Number with no decimals but not Auto-Rounded?

I seem to be having a fairly straightforward issue with Excel, although I cannot find a solution to it besides including a function.

Basically I would like to show a price in two fields, one for dollars and one for cents.

Is there any way I can force Excel to NOT Auto-Round?

You need a function to cut off the decimals. Int() will do that. Mod() will show only the decimal points.

I don’t know what behaviour you expect without using functions. Just formatting a number will not change its underlying value. This means that there is no formatting to show only the integer value and disregard the decimals without rounding. Excel does not work that way. Formatting to no decimal points will always include rounding. To work around that, you need a function to cut off the decimals.

If you want the cents to show as whole numbers, just multiply the Mod() result by 100. 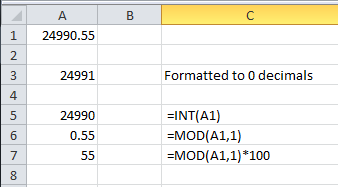 Edit: You talk about functions above, but reading other responses, I think what you actually mean is vba routine, a UDF or some other macro. You may want to get your terminology right when asking a question.

You really need to clarify what you want to achieve. It is not clear

Just putting a bounty on the question without clearly specifying your requirements does not help much.

Here is another approach, based on the following assumptions:

This can be achieved by the following change event macro:

Right-click the sheet tab, click “View Code” and paste the above code into the code window.

Compare these two sets of keystrokes

The second set of keystrokes will put the cents into their own cell, showing them as a whole number.

I’d really appreciate some feedback to the many suggestions that you have received in this thread.

You can use a second cell to calculate the value.
if your value is in cell A1, the formula would be

If it’s an option, put your data entry on one worksheet (tab) and output the un-rounded output where you need the final answer..

It is not possible to do this. However, if you want an odd solution:

You can copy and paste the shape into A2, it will change the formula to =C2. Use the Alt key again to resize the shape, if necessary, so that it fits the cell.

BTW: I am not recommending this approach, but it is an (unusual) answer to your question.

Just for giggles, here’s another solution.

Assuming you have existing data in columns, and you want to split the dollars and cents into two separate columns, you can use the Text to Columns feature. 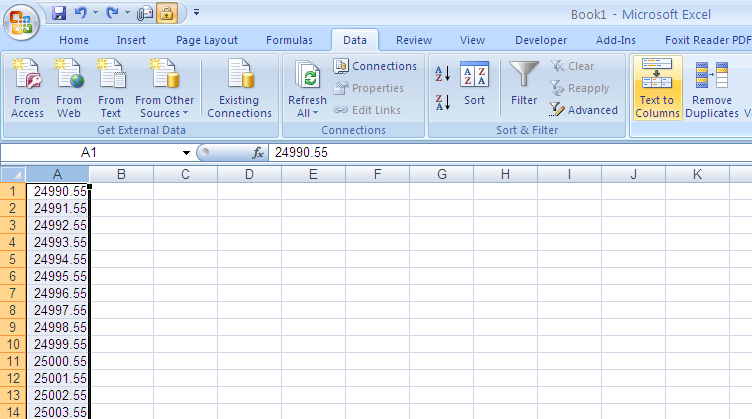 Note that we’re on the Data tab. With your column highlighted, select Text to Columns and you’ll get the below dialog. Selected Delimited and hit next. 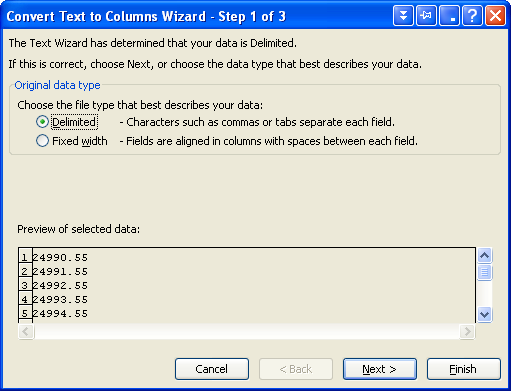 On this screen, select Other and put a period into the field, like so: 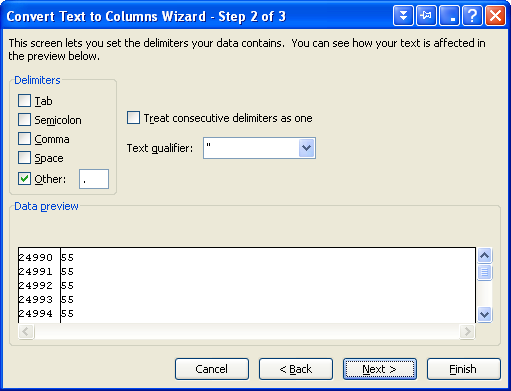 At this point, you can hit Finish and it will split them into two columns! Woohoo!

If you want to choose the destination and formatting for the fields, hit Next. 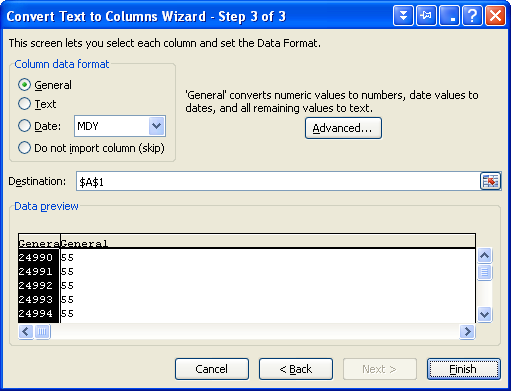 Oh and here’s the results: 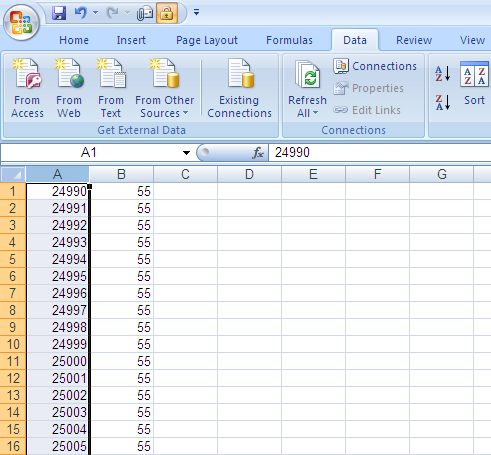 Can you just format the cell as general or text? Those formats won’t round.

Alternatively, you could ROUNDDOWN your dollars cell so it always displays the proper dollar figure.

to separate the dollars and cents into separate cells. There are several ways to do this. It doesn’t need to be complicated if you’re willing to be a little creative.

Whatever route you take, you need to use 3 cells rather than 2. 1 cell for the full amount, 1 cell for dollars, and 1 cell for cents. You must have an input cell and 2 cells with formulas if you’re not going to use code to do this.

Unfortunately I don’t see how this is possible without functions.

The function you want is TRUNC. This will simply drop the decimal portion of your number. 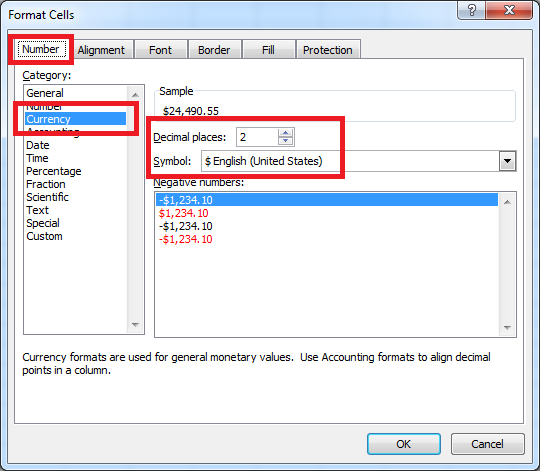 TRUNC function does not round numbers. … The TRUNC function, short for truncate function is used to remove the decimal part of a number to a set

This is DEFINITELY possible! There is a clever workaround to show decimals as whole cents using a number format, and WITHOUT changing the actual value in the cell. Right click the cell and select Format Cells. On the Number tab, go to Custom.

In the custom number format “Type” field copy/paste the following:

Then type this keyboard combination:

Click OK to save the custom number format. Then set the cell format to “Wrap Text”.

The % symbol multiplies the number by 100 so your 0.37 shows as 37. It also adds a percent symbol to the format which you don’t want.

The end result is that a cell value of 0.37 displays as 37 ¢. For me this is much better than changing the cell value with a formula.

Previous article
oop – Excel VBA: Does destroying a collection of objects destroy every single object?
Next article
excel – VBA for clear value in specific range of cell and protected cell from being wash away formula