I’ve got the excelRTDserver.py up and running in Excel 2010 (32bit) by changing the EXCEL_TLB_MINOR value to 7. I can see the server in the add-ins list and if I enter =RTD("Python.RTD.TimeServer","","seconds","5") into a cell, I get the current time. But it never updates. If I change the “5” to another number, I get an update but after the initial change it never changes again.

How do I get it to update? I found someone else with a similar problem here, but no solution.

UPDATE: I’ve got a little further – there is an exception raised within ServerStart when casting the PyIDispatch callback object into a IRTDUpdateEvent callback object. Using this method to capture the error message, I get “Cannot create a file when that file already exists.”. If I follow the suggestion here and use win32com.client.CastTo(CallbackObject,'IRTDUpdateEvent') I get “This COM object can not automate the makepy process – please run makepy manually for this object”, but I have already run makepy for Microsoft Excel 12.0 Object Library (1.6).

Any help would be greatly appreciated.

I think you may be out of luck.

According to the author of excelRTDServer.py in a recent python-win32 thread:

The message that this is in response to describes your exact problem, and it’s recent, so maybe you already got this info directly, but in case you didn’t…

I fear that things with IRTDUpdateEvent have changed with recent versions
of excel (since Excel 2007? I guess that’s not so ‘recent’ anymore…).

While hunting around for news of interface changes, I came across this
thread in a java forum:

“Apparently in Excel 12 (Excel 2007) the RTD callback object that
implements dual IRTDUpdateEvent interface throws exception (generic COM
exception 0x80020009) when is called via IDispatch. If you use v-table
binding the call to UpdateNotify succeeds. I don’t really know whether it
is a bug in Excel 12 or a feature.”

So far I haven’t been able to confirm this against the MSDN information…
But if this is true, it does explain the problem being seen. Many older
examples on the web, and pywin32+makepy treat this interface as IDispatch,
and wrap it accordingly.

I don’t think we can fix this with pywin32 as it is right now. My
understanding is that it relies on IDispatch support. May need to look at
comtypes (http://starship.python.net/crew/theller/comtypes/) to wrap the
(new?) IRTDUpdateEvent objects, or maybe a C extension. 🙁

To work around this problem I’ve created a new project on github for pythoncom excel types:

This includes a slightly modified version of excelRTDServer.py that uses the new type PyIRTDUpdateEvent instead of the win32com makepy wrapper, and so it now works in Excel 2010 (look for the comments 'EXCELTYPES_MODIFICATION' in exceltypes/demos/excelRTDServer.py).

To build the project you will need visual studio installed (it won’t build with gcc) and you can build it using the setup.py included in the project as follows:

I get “This COM object can not automate the makepy process – please run makepy manually for this object”, but I have already run makepy for Microsoft Excel 12.0 Object Library (1.6).

Yesterday at work after a while reading your question, I forgot that is python and not java :)).. Well, the only thing I think now is that seems you need to run the PIA for office 2010.

Edit later: if you steel have problems after what i told you., please comment and not downvote, because this issue is uncommon.

This happen because is missing the option to generate v-tables.

Now you can generate a new java wrapper for IRTDUpdateEvent to request v-table: 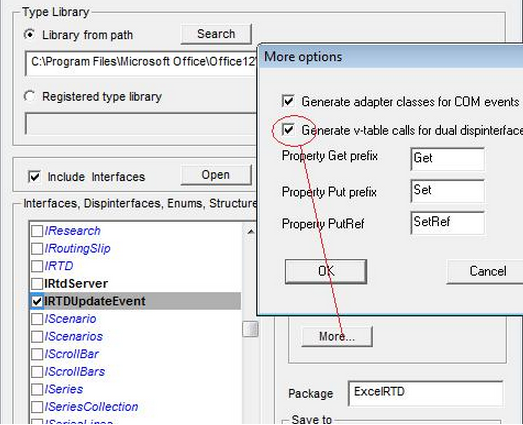 That error message sometimes is raised when u put it in something like ‘for’-loop,here is a hackly solution 4u:import time,and use ‘sleep()’ in your loop

The IRTDUpdateEvent problem (throwing exception) as described in here should be fixed in the latest Office 365 version.

“Apparently in Excel 12 (Excel 2007) the RTD callback object that implements dual IRTDUpdateEvent interface throws exception (generic COM exception 0x80020009) when is called via IDispatch. If you use v-table binding the call to UpdateNotify succeeds. I don’t really know whether it is a bug in Excel 12 or a feature.”

Therefore excelRTDserver.py should work fine with the latest version of Office. In other words, =RTD("Python.RTD.TimeServer","","seconds","5") should continuously get updated as expected.