I’m reasonably famaliar with using the VBA Dir procedure to loop through files in a folder. Usually, I don’t have issues, but on a project I’m working on, the DIR is picking up a file that, as far as I can tell, does not exist. This ultimately causes my code to debug error.

Here is a screenshot of the folder containing the files.

Yet when the code tries to execute the open, it errors (always after successfully doing one file first) and says the issues is because of some file named Documents.XLSX. I rarely use xlsx types, so I don’t know where it’s pulling that name from. 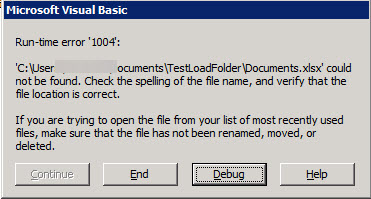 Strangely, if I set VBA to debug.print it prints the name as “..” as opposed to the Document.xlsx name.

Does anyone know why this would happen?

I’m certain it has something to do with opening and closing the file because if I remove this action, the code Debug.Prints correctly with the three file names. I considered that maybe closing the file was hanging it, so I included DoEvents after the close, but no change. I even stopped the macro for about a minute after closing the file before running the next line of myFile = Dir and that still didn’t solve it.

Any suggestions on why this is or how further to troubleshoot would be most helpful.

Unfortunately, I don’t even have a workaround. If I set to only execute if myFile <> “..” that works to skip, but for the disappearance and reappearance of “..” is throwing off the “next” option to cause the loop to repeat indefinitely.
Code is pretty standard.

UPDATED THANKS TO JEEPED IN COMMENTS
I didn’t think to mention that in a different module, I have a custom function that’s intended to ensure that the user has entered a valid file path in a Cell. I also should mention that my VBA CODE 'do Something is updating cells, and probably causing this custom function recalculate.

If you use Dir with the vbDirectory argument and suffix the path with a backslash as you’ve done then you will return two results; a . and a ... No need for a loop; either it is there or it is not.

If you use Dir with the vbDirectory argument without a backslash suffix then you will return one result; the name of the folder. No need for a loop; either it is there or it is not.

To summarize, if you look for a folder with or with out a trailing backslash you will receive a non-zero-length-string as a result unless you have a singular very special circumstance.

Your ‘helper’ function code ‘as-is’ should be fine.

btw, if you are a fan of walking over errors then this accomplishes the same thing with or without the trailing backslash (i.e. guarantees the folder’s existence to a single sub-folder level).

Previous article
php – how to count new lines in a very big string?
Next article
excel – Using VBA to open Chrome and fill out a form