I am trying to connect OsiSoft Pi Datalink with Excel VBA and put the output into a variable for further VBA procesing.

This is the code that is working fine in the cell:

Converting this to VBA:

I have checked the VBA references as below and they also seem correct: 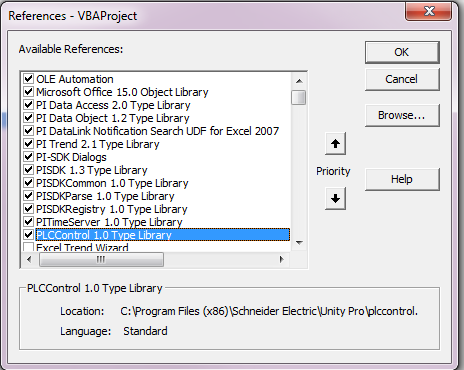 There is no information in the user guides or available that I could find on the internet for corretcly connecting VBA to Pi Datalink.

I found this on stackoverflow but it didn’t explain the issue:

I am possibly missing somthing really basic but it seems like I am executing the exact same code in VBA as in the cell. The cell is returning a value and VBA is just returning an error.

Thanks in advance for your help

The point that cyboashu makes is a good one. It might also be the case, though, that you are receiving this error because of your syntax.

When using Evaluate, you must pass in the string exactly as you want it to be evaluated. Your code is passing the name of the variables instead of their values. If I could simplify an example. The following code would return an Error (2029 in this case, which is a #NAME error):

In this example you would need to create the string so that the value of txt were evaluated, like so:

I suspect this is the cause because if inverted commas are missing from a required string, then Evaluate will return a 2015 Error. This would do it for example:

I don’t have the library to test your exact code, but try rewriting your evaluation string to incorporate the values of your variables instead and remember to pass in the inverted commas too.

Previous article
office js – I want to replace particular columns data in a excel table
Next article
Differentiate between Zero, blank and a number in excel