git – How can I reset or revert a file to a specific revision?

I have made some changes to a file which has been committed a few times as part of a group of files, but now want to reset/revert the changes on it back to a previous version.

I have done a git log along with a git diff to find the revision I need, but just have no idea how to get the file back to its former state in the past.

Assuming the hash of the commit you want is c5f567:

If you want to revert to the commit before c5f567, append ~1 (works with any number):

As a side note, I’ve always been uncomfortable with this command because it’s used for both ordinary things (changing between branches) and unusual, destructive things (discarding changes in the working directory).

You can quickly review the changes made to a file using the diff command:

Then to revert a specific file to that commit use the reset command:

You may need to use the --hard option if you have local modifications.

A good workflow for managaging waypoints is to use tags to cleanly mark points in your timeline. I can’t quite understand your last sentence but what you may want is diverge a branch from a previous point in time. To do this, use the handy checkout command:

You can then rebase that against your mainline when you are ready to merge those changes:

You can use any reference to a git commit, including the SHA-1 if that’s most convenient. The point is that the command looks like this:

That will reset foo to HEAD. You can also:

for one revision back, etc.

And to revert to last committed version, which is most frequently needed, you can use this simpler command.

I had the same issue just now and I found this answer easiest to understand (commit-ref is the SHA value of the change in the log you want to go back to):

This will put that old version in your working directory and from there you can commit it if you want.

If you know how many commits you need to go back, you can use:

This assumes that you’re on the master branch, and the version you want is 5 commits back.

Sometimes you just want to go back and forget about every change past a certain point because they’re all wrong.

which shows you a list of recent commits, and their SHA1 hashes.

to restore the state to a given commit and erase all newer commits from the record permanently.

This worked for me:

Then commit the change:

You have to be careful when you say “rollback”. If you used to have one version of a file in commit $A, and then later made two changes in two separate commits $B and $C (so what you are seeing is the third iteration of the file), and if you say “I want to roll back to the first one”, do you really mean it?

If you want to get rid of the changes both the second and the third iteration, it is very simple:

and then you commit the result. The command asks “I want to check out the file from the state recorded by the commit $A”.

On the other hand, what you meant is to get rid of the change the second iteration (i.e. commit $B) brought in, while keeping what commit $C did to the file, you would want to revert $B

Note that whoever created commit $B may not have been very disciplined and may have committed totally unrelated change in the same commit, and this revert may touch files other than file you see offending changes, so you may want to check the result carefully after doing so.

… check out the branch of changes you want to apply to the master branch. The rebase command takes the commits from <my branch> (that are not found in master) and reapplies them to the head of master. In other words, the parent of the first commit in <my branch> is no longer a previous commit in the master history, but the current head of master. The two commands are the same as:

It might be easier to remember this command as both the “base” and “modify” branches are explicit.

. The final history result is:

… do a fast-forward merge to apply all <my branch> changes onto master. Without this step, the rebase commit does not get added to master. The final result is:

master and <my branch> both reference B'. Also, from this point it is safe to delete the <my branch> reference.

where <N> is the number of revisions of the file to rollback for file <filename>.
For example, to checkout the immediate previous revision of a single file x/y/z.c, run

Add the following to your gitconfig

Essentially, all that one would manually do in this situation,
wrapped-up in one beautiful, efficient git-alias – git-prevision

I have to plug EasyGit here, which is a wrapper to make git more approachable to novices without confusing seasoned users. One of the things it does is give more meanings to git revert. In this case, you would simply say:

Then just stage and commit the “new” version.

Armed with the knowledge that a commit can have two parents in the case of a merge, you should know that HEAD^1 is the first parent and HEAD~1 is the second parent.

Either will work if there is only one parent in the tree.

Note, however, that git checkout ./foo and git checkout HEAD ./foo
are not exactly the same thing; case in point:

(The second add stages the file in the index, but it does not get
committed.)

Git checkout ./foo means revert path ./foo from the index;
adding HEAD instructs Git to revert that path in the index to its
HEAD revision before doing so.

Many suggestions here, most along the lines of git checkout $revision -- $file. A couple of obscure alternatives:

And also, I use this a lot just to see a particular version temporarily:

(OBS: $file needs to be prefixed with ./ if it is a relative path for git show $revision:$file to work)

And the even more weird:

As of git v2.23.0 there’s a new git restore method which is supposed to assume part of what git checkout was responsible for (even the accepted answer mentions that git checkout is quite confusing). See highlights of changes on github blog.

The default behaviour of this command is to restore the state of a working tree with the content coming from the source parameter (which in your case will be a commit hash).

So based on Greg Hewgill’s answer (assuming the commit hash is c5f567) the command would look like this:

Or if you want to restore to the content of one commit before c5f567:

For me none of the reply seemed really clear and therefore I would like to add mine which seems super easy.

I have a commit abc1 and after it I have done several (or one modification) to a file file.txt.

Now say that I messed up something in the file file.txt and I want to go back to a previous commit abc1.

1.git checkout file.txt : this will remove local changes, if you don’t need them

2.git checkout abc1 file.txt : this will bring your file to your wanted version

3.git commit -m "Restored file.txt to version abc1" : this will commit your reversion.

Between the step 2 and 3 of course you can do git status to understand what is going on. Usually you should see the file.txt already added and that is why there is no need of a git add.

In order to go to a previous commit version of the file, get the commit number, say eb917a1
then

Many answers here claims to use git reset ... <file> or git checkout ... <file> but by doing so, you will loose every modifications on <file> committed after the commit you want to revert.

Basically, it will first generate a patch corresponding to the changes you want to revert, and then reverse-apply the patch to drop those changes.

Of course, it shall not work if reverted lines had been modified by any commit between <sha1> and HEAD (conflict).

Note: Do not forget to type the hash before the last one. Last hash points your current position (HEAD) and changes nothing.

Obviously someone either needs to write an intelligible book on git, or git needs to be better explained in the documentation. Faced with this same problem I guessed that

would undo the last commit which is seemed to do.

What you need to type in your terminal:

This is a very simple step. Checkout file to the commit id we want, here one commit id before, and then just git commit amend and we are done.

This is very handy. If we want to bring any file to any prior commit id at the top of commit, we can easily do.

Will revert a given commit. It sounds like you think git revert only affects the most recent commit.

That doesn’t solve your problem, if you want to revert a change in a specific file and that commit changed more than that file.

if you commit a wrong file in your last commits follow the instruction : 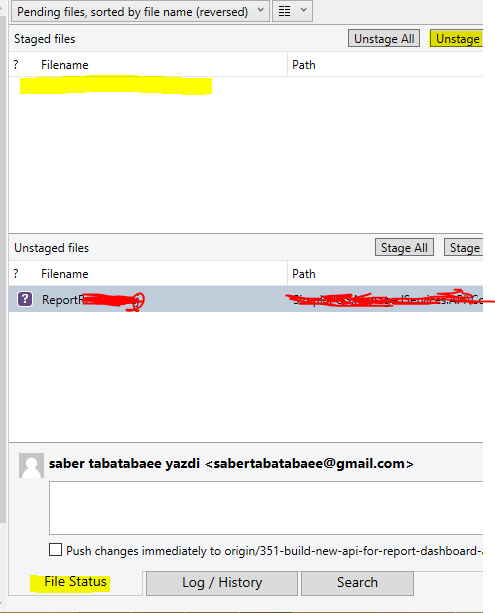 Previous article
version control – How do I force "git pull" to overwrite local files?
Next article
html – How to horizontally center a <div>?