I followed the steps here to the letter and set up a content experiment for our Android app:

We’ve had Analytics in our app for several months now, it’s definitely tracking screen views, events, goals etc, the Tag Manager container is linked to the Analytics property, I’m sure I’m looking at the correct property and the container is published (for 3 days now). 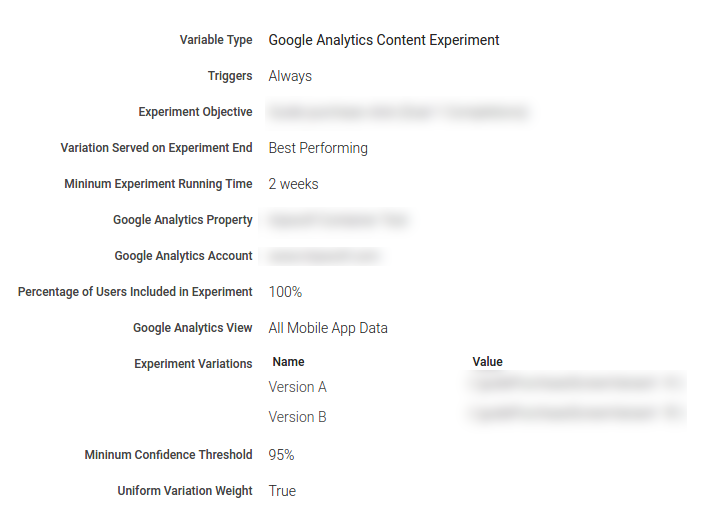 While inside the app I’m getting data for the different variations from the container, even after three days I still don’t see any sessions in Analytics. It’s really frustrating.

Is there some secret sauce not mentioned in the above guide, or could there be some beginners mistake that comes to mind that I could be making?

Is there something I have to explicitly do from inside the app to make the sessions count? According to the guide, I linked above, there shouldn’t be.

Since posting this, a few sessions have appeared for this content experiment (after 10 days!) in the Google Analytics Web interface, but so far only one variant, even though I have clearly determined via debugging that I am getting both variants returned by Tag Manager.

I only did one change since originally asking this question, and that’s adding a (dummy) Google Analytics tag to the Tag Manager container we’re using. I have no idea whether this triggered the sessions to start being picked up by Google Analytics or not, but it seems likely unless the GA/Tag Manager guys fixed something on their end.

Anyway, I’m still just tapping in the dark here as it seems that the official documentation for this feature has some major holes in it. Nowhere in the guide, I linked below does it mention that we have to create an Analytics tag in the container to make the connection between Tag Manager and Analytics work. In fact, it says there that the only thing necessary for linking them is to explicitly add an External Account Link to Analytics from Tag Manager in the settings of the service, which I did from the very beginning.

OK, it looks like the missing A variant was a false alarm, now there are a few sessions from both variants in the Analytics Content Experiment report.

It’s still very much unclear why it took over a week to get the first session in the report, even though I ran several sessions all throughout that week and none of them showed up until I added a dummy Google Analytics tag to our Google Tag Manager container. This tag is configured to track a dummy event, that the app actually never even tries to trigger, and it definitely doesn’t show up in Google Analytics.

OK, 24 hours later I don’t see any more sessions from yesterday, despite running the app periodically on a few devices yesterday to make sure I can see something new today. What’s worse, when defining the experiment in Tag Manager, I selected a Goal from Analytics as the test goal, and the Content Experiment shows 0 conversions for it in both variants’ sessions despite the fact that under Conversions->Goals->Overview I see 8 conversions for that same day. I’m sure all of those conversions were done by me because this Google Analytics property is only used for testing, it’s not live.

Content Experiments for mobile apps are DEPRECATED and it is removed.