google chrome – What features do Progressive Web Apps have vs. native apps and vice-versa, on Android

Questions:
Closed. This question needs to be more focused. It is not currently accepting answers.

Want to improve this question? Update the question so it focuses on one problem only by editing this post.

In 2015 Google introduced a new approach for developing web apps for Android: progressive web apps. One can create an application that will look like a native application, will be able to use device’s hardware like camera and accelerometers, receive push notifications, have a launcher icon, work in offline, store local data, etc.

On Android, what features do native apps provide that progressive web apps do not support, and vice versa.

TL;DR – As of Feb 2017, Progressive Web Apps are a sufficiently powerful platform that Twitter has moved all of their mobile web traffic to a React PWA.

As of August 2016, Progressive Web Apps actually offer more hardware access than commonly thought. Here’s a screenshot of whatwebcando.today from my Chrome 52 stable on Android: 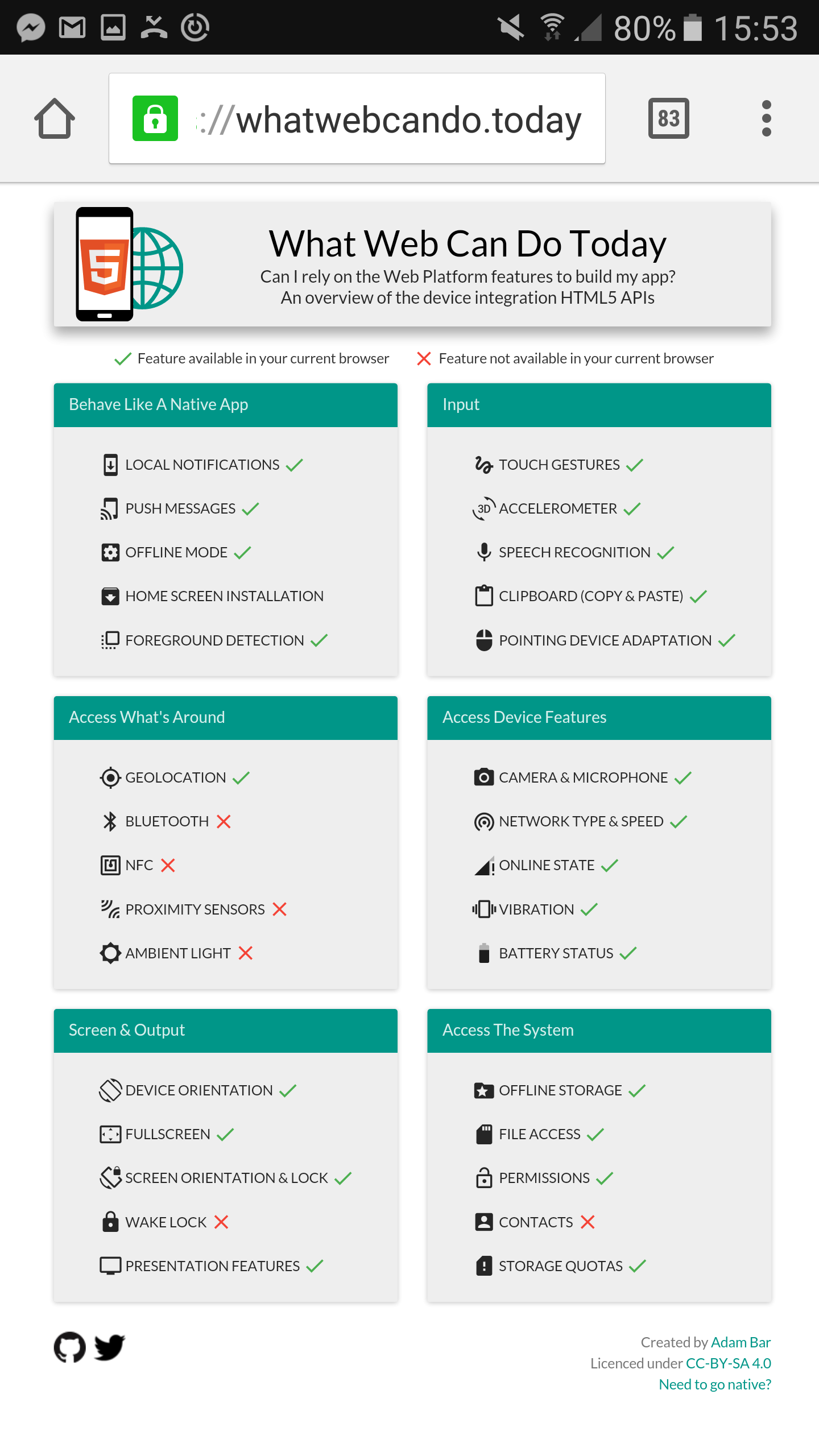 These features are being implemented or already work in some browsers:

Another important point to note is that the Origin Trials Framework (implemented in Chrome) enables manufacturers to expose and test hardware (or software) capabilities without having to go through the standardization process. For example, a phone maker could expose an API for reading the values of a pressure sensor, refine it, then submit it for consideration to the W3C.

Besides hardware access, there are also software features traditionally employed by native apps that are now available to web apps.

Traditionally native features that PWAs can also use

These features cover a lot of use cases, and many popular native apps nowadays could be rewritten as PWAs. Take Slack, for example. Its open source alternative, Rocket.Chat, is building a PWA version. For more PWA demos, see https://pwa.rocks.

Native Android features not yet available to PWAs

Final note: PWAs run, with the same codebase, on the desktop as well as most mobile devices. On desktop environments (ChromeOS, and later Mac and Windows), they’re launched in the same way as other apps, and run in a regular app window (no browser tab).

The main advantage for native applications is that they can access all native APIs a platform could offer (contacts, camera flash, SMS, telephony, network, bluetooth, sensors, raw sockets…) while a progressive web application can not (yet) as they are constrained by the Standard Web capabilities.

From these points, linkable was one of the first characteristics imported by native applications from the Open Web in the form of mobile deep linking.

But special mention deserve the combo fresh + installable as it represents one of the main advantages of the Web as a platform over the native alternatives. Here installable means that it appears in your home screen. It does not mean you require to pass downloading and installation stages. You open a URL or discover a service while browsing and it’s done: it appears in your home screen.

Fresh refers to how a regular web works, offering an instant load and seamless updates. You are not asked for installing an update from the web of YouTube, it is deployed and you consumes it the next time you visit it.

I’m not talking about the benefits of the remaining points because you were asking for the differences and, for instance, re-engagement is something native applications already have via push services and notifications and now web applications have caught up.

Other related and key question is about which platform is more suitable for your needs. If you are not accessing special hardware capabilities, the Web should be enough and choosing the web you are free from the marketplaces, proprietary ecosystems and by the way, you can ensure certain grade of ubiquity and interoperability.

As final notes, I recommend you to browse www.flipkart.com from a mobile with Chrome. It’s pretty awesome: no bugs, smooth navigation, app-like feeling. Go offline and it will continue working. A truly real world example of that post. Add the app to home screen and next time you open it, the experience is even better.

You can take a look at Firefox OS as well as an example of bringing more platform APIs to the Standard Web (with more or less success).