There are many tools and SDKs which layout a graph. ogdf, GraphViz, mxGraph, yEd…

One of useful layouts is “Hierarchical Layout”. But there is no pure algorithm or pseudo code to describe it. Even, There is not a clear definition of this type of layout. Is anyone know about the algorithm? 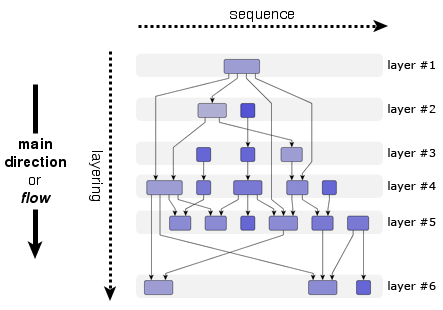 Simple hierarchical layout algorithm is visualisation of the ASAP sheduling algorithm (check this lecture [link]), so it’d be better to read it, on my view.

BTW your picture is not fully correct – the proposed visualisation is only one of the possible ones.

Imagine, that you have list of node and you know dependence between them.

This will work only for non-cyclic directed graphs. For the undirected ones you should modify the algorithm a bit (take random node as root), but the main idea, I think, is understandable.