I am currently migrating an Eclipse app to Android Studio.
This app was using the in app billing.

I get this error message:

So, following some tutorials, I move this file from com.mypackage.billing to src/main/aidl
(see this reference)

But as soon, as I do that, I get this message:

The message is clearly a contradiction with the post from the Google bug page I linked above.

Anyone suceeded to make this aidl file to work and can help me? 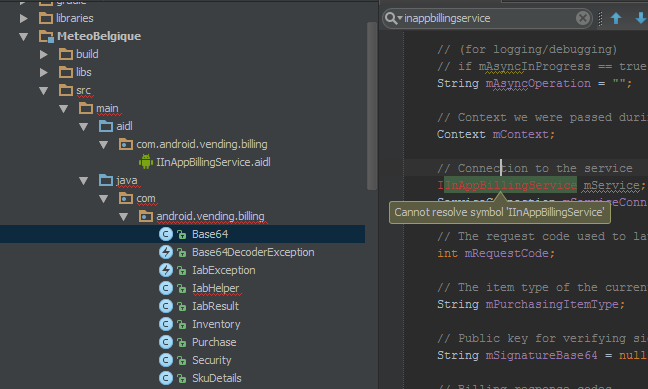 Just to inform, some links I followed:

Just as the error message says, you need to put IInAppBillingService.aidl in the correct directory dictated by it’s package (com.android.vending.billing).

Adding this as an answer since it seemed to help quite a few people.

Note: Make sure you include the necessary import if your reference isn’t working

After I did this, the references to IInAppBillingService in my code were still highlighted as errors, but after rebuilding the app, the class was recognized

The rest of posts here didn’t work for me till I created a new folder like shown here. 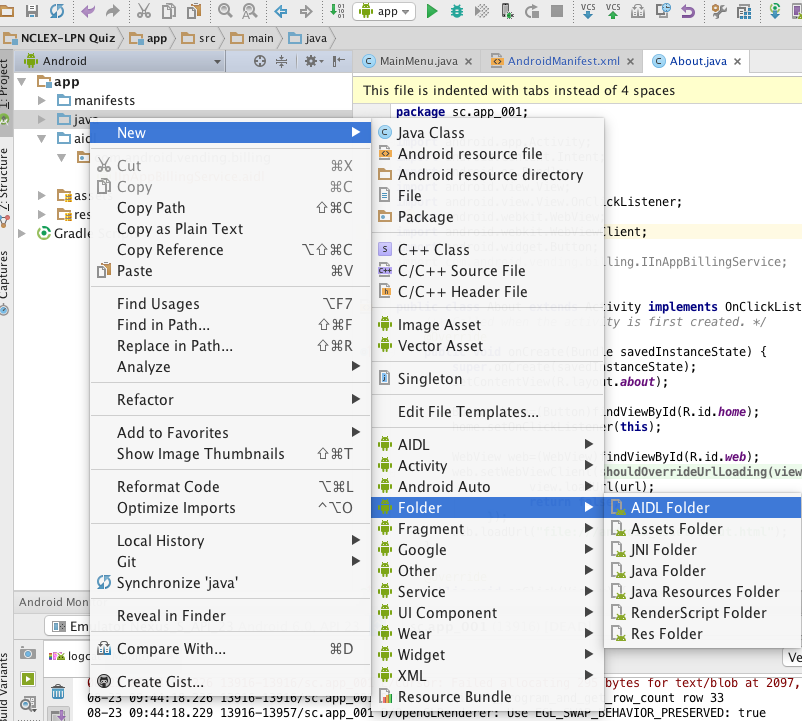 Add this code in build.gradle

The above answers concentrate on file location, but it appears you already had that set correctly. I experienced this same issue in Android Studio, but none of the listed answers resolved it, and I banged my head against it for an hour. Eventually, I realized that I was missing an obvious import:

Once I added that it resolved this error message.

This import isn’t mentioned in any of the Google Billing docs or included in any of the code examples that I found. While it may be obvious to experienced Java developers, beginners just trying to learn their first project may need it explicitly pointed out.

We need to add

Now clean the project, rebuild the project – We can the corresponding java file for the aidl generated in app\build\generated\source\aidl\debug\packagename\youraidl.java

I know it sounds so easy, but I copy paste from google sample all folder

and next I clean and rebuild project and it found a reference.

I’ve tried every solutions, but the problem was that Android Studio had compiled, with any apparent reason, in a different build type of the module that contains the AIDL packages than it was specified by the settings.
From debug to release, so the other modules couldn’t see the AIDL pkg.
Switching from debug to release and turns back, solved my problem.

restarting Android Studio worked for me

a second silly thing that took me a while. I dropped the code on Android Studio to allow him create the file, but he created a .java (as expected) instead a .aidl Jiji, stupid of me