I try to build from the visual studio

this is my Project folder 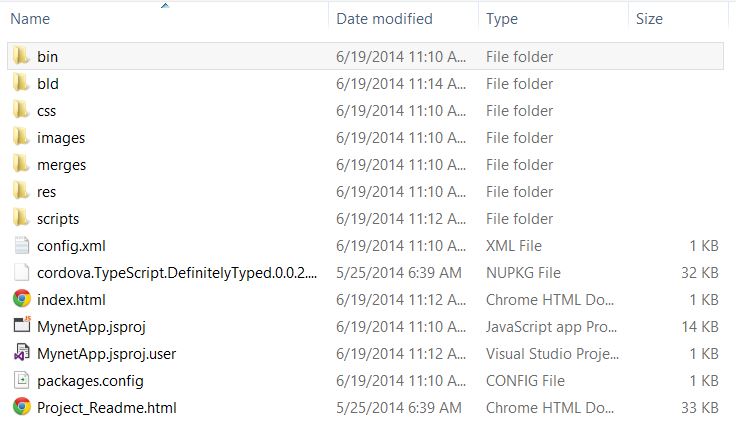 1- If you have used Ripple simulator as the target, nothing will be generated in the bin folder. You need to switch the build configuration to “device” in order for the binaries to be generated

2 – The www folder that is generated by the Visual Studio template has nothing special and you shouldn’t have issues with PhoneGap Build. If you have errors they are coming from your JS code itself

3 – To build the binaries for Android using the Multi-Device Hybrid extension for Visual Studio, you should be good by simply switching the build configuration to “device” instead of Ripple simulator. For iOS you need to use the Remote Build and Simulation Agent for iOS (which require have a Mac as the iOS tools are NOT available for Windows and you cannot generate the iOS binary directly on your Windows machine. Otherwise, you can consider using PhoneGap Build service

From the image the error looks to be similar to the one I was getting about my device not being recognized/found.

This answer explains how to get the APK directly just by setting the solution to Release, and only Building the project rather trying to do a full deploy to a device. It pretty much is the same answer as mentioned in point 3 above, just tested on a PhoneGap App solution.

Previous article
android – onActivityResult getting RESULT_CANCELLED when using Intent.EXTRA_ALLOW_MULTIPLE
Next article
How to decide when to run different android applications components in a separate process