How to develop in Linux-Like Shell (bash) on Windows?

I’m Windows user. But according to my project requirements, I need to write Linux Shell Script(Bash shell). How to develop Linux Shell on Windows?

Is there any IDE for writing Linux Shell Scripting? Please share me some ideas and resource links.

You have quite a number of options:

Install cygwin. It will give you a bash.

The minimal GNU for windows. Comes with set of commands, compilers. This came with my Git on Windows and now the default shell for small scripts

VM, such as VirtualBox

There are tons on VMs, VirtualBox being easy to use(it powers the Boot2Docker). You can do development and test on real Linux distros.

There is new kid on the block. This allows you to run User Space Ubuntu using Windows Subsystem for Linux (WSL). see more on it at Microsoft blog

Shell scripts should be small, requires less IDE etc. I use VIM with syntax highligthing. But it seems ShellED may be useful in your case. I got the link from answer for this question – Bash script plugin for Eclipse?

IntelliJ has couple of plugins too for Bash..

I prefer Gow (Gnu on Windows) over Cygwin. Both will give you bash on Windows, but Cygwin has unnatural conventions for filesystem access (/cygdive/c/some/path instead of c:\some\path).

The native windows command terminal is pretty lame, take a look at Conemu.

I’m not aware of any bash IDE, but there are a plethora of windows text editors with decent syntax highlight for bash scripts. I like Notepad++ and Sublime text (the multiple cursor feature from Sublime rocks!). I don’t recommend bash for anything with more than 30 lines, if you ever feel the need for an IDE, perhaps the task is more suited for Python, Ruby or Perl (IMHO Python is more maintainable).

The Bash shell is coming to Windows 10 in the upcoming Anniversary Update (Redstone).

Here’s the steps to run Bash on Windows 10 OS: 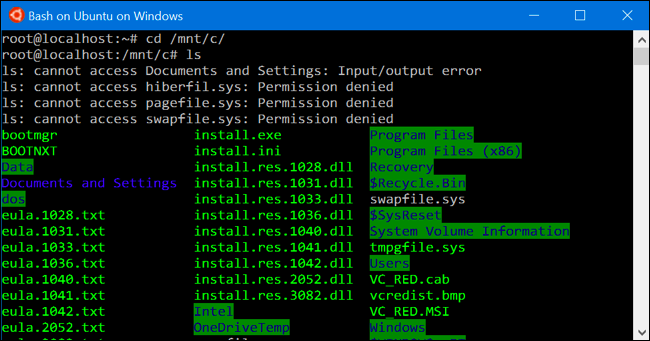 Since you need to write linux shell scripts, you are learning Linux. So you should install Linux on your machine (preferably on its own partition and boot from it, otherwise in a VM).

Using cygwin or whatever imitation of Linux shell is not using Linux. You’ll learn a lot more by installing and using Linux (and by developing on it with an editor like emacs or gedit or gvim ….). Also, take advantage that Linux is almost entirely free software, so you can study its source code and improve it.

Not installing Linux is not doing yourself a favor.

I believe cygwin is for those who love Linux but have to use Windows. It cannot give you the entire Linux feeling (e.g. you won’t be able to write shell scripts looking into /proc which does not exist in Windows, even with cygwin).

There is cygwin , that’s a linux console for windows.. so you can execute all the linux command with it.

Install Cygwin to execute the commands. However you can use NotePad++ as editor which has native windows binaries.

If you want to use a simple environment emulating all Linux environment as alternative to cygwin (more lightweight) you can try mingw and you can use notepad++ or emacs or vim to provide some syntax highlight on sh scripts.

Everyone has said to go full Linux or use various mocks.
Cloud9.io is a good option if you don’t need that much.
You can set up a “workspace” which can be accessed online, lets you write in literally any language similar to np++, but the best part is, it’s an online Linux, so you have a terminal, with all your shell commands – no mock up, no dual boot.

The downside to this is that the free users aren’t given that much power, so if you wanted to execute some high-level maths or output a large image, it will crash as you will be using too much memory. But it is still really worth getting into, it’s only ever crashed once on me, and I do some pretty memory-intensive things.

I had a similar problem.
I like both Linux and Windows, and I am working on both systems, but for programming (and generally, for text editing) I use Windows, for different reasons. For example, I write C/C++ code on Windows, using the Windows DevC++ IDE, then I can compile this project on Linux, by sharing the files on LAN. Now I have to write long scripts, and I would like to do it in a similar way. Ok, maybe its a special request, but maybe I am not the only one who works in such a mixed environment.
First, I tried notepad++ (it is suggested by others as well), but does it support syntax highlight for Linux scripts? I didn’t found this feature…
Then I tried gedit compiled for Windows. It requires the GTK library installed (actually it was already on my Windows). Gedit has syntax highlight for scripts!
So I suggest using gedit for Windows for this case. The edited script can not directly be started/tested with it, but for editing, it is fine!

How can I pause for 100+ milliseconds in a linux driver module?

Questions: I’m writing a kernel driver for a device that produces regular amounts of data for reading periodically. The user space program is ideally suited to making this a blocking driver. Wha...

How can one embed a font into a PDF with free linux command line tools? [closed]

Questions: I have a set o f PDFs that display fine on my machine. However, they use non-standard fonts installed on my machine. As they are not embedded (as per pdffonts), they don’t display on ...