input – Custom 'Keyboard' built in an application on Android

I’ve been looking to create a custom keyboard for my application. At first, I started to look at the SoftKeyboard for the SDK examples, but reading the Android Developer Group led me to this post:

This is really not how the input
method framework is supposed to work.
An IME should be a generic input
facility, not for a particular
application. If you need some
app-specific input, you should build
it into your UI rather than pushing
it out to a generic IME.

How do I build an app-specific input within the UI? I mean, is there a way to extend the Keyboard app or something and use it only in my application?

Features needed for the keyboard:

PS: an ugly solution could be to make a table of ImageButton for example, but I wanted to make something clean.

I’m not really sure if there’s a straight-forward solution to this (to that extent that it is even possible to understand the real reason behind the original question).

As is quoted in the original question:

If you need some app-specific input, you should build it into your UI
rather than pushing it out to a generic IME.

What is meant by that, is not that you within your app should try to build in such input features by extending or modifying the soft keyboard on the phone. There are so many different soft keyboards (and basically, the soft keyboard is just another app), since most phone manufacturers create their own version, and people download 3rd party keyboards (such as Swype or SwiftKey etc.), and I can’t picture there being a way for you to “hack” into those to add a few buttons or whatever it is you want (which could also be a major security hole, another reason why it probably isn’t possible).

What instead the above quote suggests, is that you have to create some other form of input besides the keyboard. One such example, and a very good one if I might add, is how the RealCalc Scientific Calculator looks: 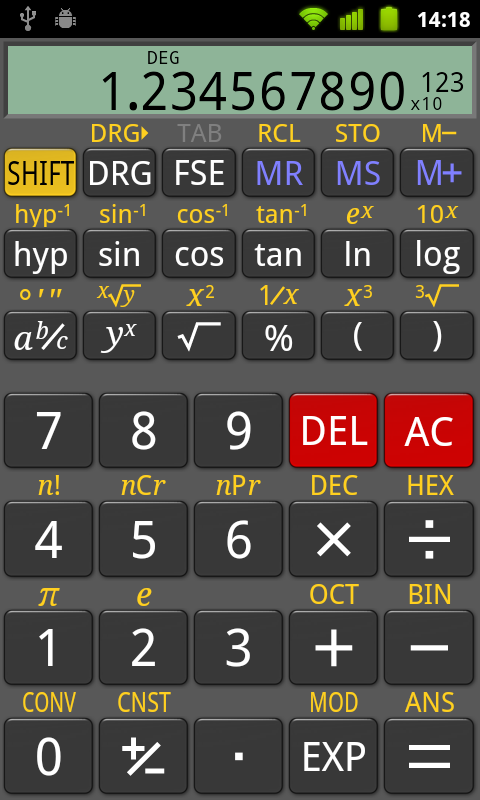 Now this isn’t open source, so I can only guess how the code looks like (but it shouldn’t be too hard a guess either): in its simplest form, this is just a grid with lots of buttons. Each button handles the onClick event, which would mean performing some kind of action (changing the label on some other buttons, showing a menu, displaying some text in the upper label or whatever), and that’s probably pretty much what’s to it. And of course, the phone’s soft keyboard is never displayed (since you don’t need a keyboard with all those buttons (and also there aren’t any input fields to write anything in)).

It all boils down to the already mentioned quote: If you need some app-specific input, you should build it into your UI. Or in other words: create buttons (and don’t display the soft keyboard if you don’t need it) and make things happen when you click them.

And just to have mentioned it: if you do want to create your own IME (which I strongly believe is not the case here), you should have a look at the following resources:

There you can see an example of defining keyboard using XML file. I think that this is what you are looking for.

As mentioned by @sebap123
Keyboard and KeyboardView class are the one you need to use,

Further, for Implementation, here is a quick detailed guide.